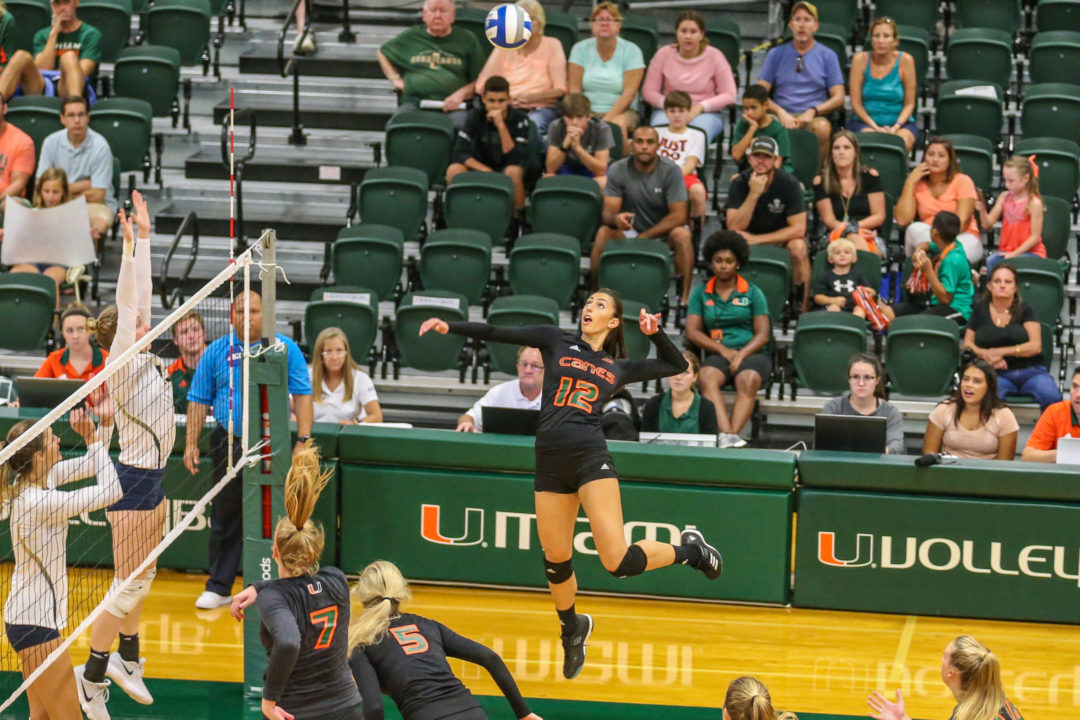 CORAL GABLES, Fla. – Miami kept its place in the ACC title race with a sweep of Florida State on Wednesday night.

Reigning VolleyMob Player of the Week Olga Strantzali downed a match-high 21 kills on a .486 hitting effort to lead the way for the ‘Canes. Junior outside hitter Kolby Bird followed with 11 kills, while junior outside Lucia Pampana (7) and redshirt freshman outside Elizaveta Lukianova (6) also aided the offense. Senior middle blocker Sakile Simmons notched a team-leading four blocks, while redshirt junior setter Haley Templeton and senior libero Sylvia Hernandez turned in 10 digs apiece to pace the backcourt. Templeton rounded out a double-double with 42 assists.

Miami broke free in Set 1 with a 5-0 run, including a kill and a block by Pampana and a Sara Duque ace, leading to a 7-2 Hurricane lead. Strantzali downed three kills, two FSU errors and Simmons and Templeton added a stuff as Miami stretched the margin to nine at 14-5. Down 20-12, the Seminoles made a run, slicing the deficit in half at 21-17, with two Kubura putaways and two Hurricane miscues. A Lukianova kill and Hernandez ace put Miami on the hill at 24-18 and a FSU serve error capped the 25-19 win.

The Canes jumped out to a 4-1 lead in Set 2 and pushed the margin to six at 10-4 on a kill and a block by Templeton. Three Strantzali putaways raised the edge from 11-7 to 14-8. A kill by Bird and a stuff by Knuth and Burkert had the Seminoles back within four at 16-12. That sparked a 5-0 Miami run, including two more Strantzali kills, which pushed it to 21-12, margin from which Florida State could not recover, despite countering with a 4-0 run of its own. A block and a kill by Strantzali and a putaway by Templeton gave Miami its first set point try at 24-17. FSU extended the set with a 4-0 run, including two Kibura kills and one by Knuth, but couldn’t stop Strantzali on the fifth attempt.

After splitting the first eight points of Set 3, Miami surged ahead at 7-4 with a Stranzali putaway and two FSU miscues. The Seminoles rallied to tie it up at 10 with kills by Natasha Calkins and Kubura and two by Ambrose. The Hurricanes called timeout and after ties at 11 and 12, pulled ahead 19-14 with kills by four different players and a pair of Simmons stuffs. Florida State pulled within three at 20-17 and 21-18 as Knuth added two kills and Kubura notched a block. Down five at 23-18, FSU put together a 5-1 run, including a kill, a block and an ace by Knuth, to thwart a Miami match-point try and narrow the gap to one at 24-23. Strantzali closed the door for the Canes with her 21st kill of the night.