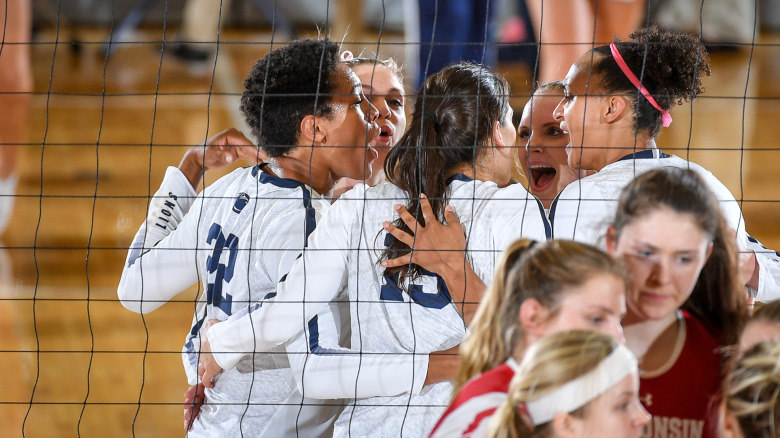 Penn State trailed 22-19 in Set 1, but rallied to steal away the 27-25 win. The Nittany Lions called timeout and got kills from Frantti and Washington and an ace from Cox to knot the score at 23. A Toliver kill gave MSU the first set-point try at 24-23, and another made it 25-24 Spartans. A Weiskircher set landed deep in the MSU backcourt to tie it up. A Spartan hitting error and a solo stuff by Lee gave PSU the victory. Early on in the set, Michigan State boasted a 12-9 lead after a Megan Tompkins ace, only to see the Nittany Lions tie it up at 14 with back-to-back kills by Washington.

The teams split the first 12 points of Set 2 before pushed ahead by four at 13-9. Two kills by Frantti and one each from Lee and Tori Gorrell aided the rally. The Spartans were within one four times, last at 18-17 as Kranda, Toliver and Bailey notched kills. Penn State pulled away and closed out the set on a 7-2 run, including a pair of blocks.

Penn State faced a 22-19 deficit in Set 3, but rallied to tie the score at 22 and fight off Michigan State set point tries at 24-23 and 25-24. A Kranda kill and Frantti hitting error, however, gave the Spartans the win and sent the match to a fourth set. The teams tied nine times in the first half of Set 3, leading to a 13-all score. A pair of Lee kills put PSU up 15-13, but a pair of miscues and putaways by Bailey and Kranda gave Michigan State a 17-16 edge. Penn State regained the lead at 18-17 and 19-18, but two Garvelink kills and one by Toliver had the Spartans up three at 22-19, before the set went to extra points.

The Nittany Lions jumped out to a 5-0 lead in Set 4 and built a 13-6 advantage midway through. Four Washington kills and putaways by four other players lifted Penn State to the advantage. Michigan State scored eight straight to turn the deficit into a 14-13 lead of its own. Two kills each by Kranda and Tolliver and two PSU miscues put the Spartans on top. The Nittany Lions answered with a 5-0 run, including three kills and two MSU errors, to vault ahead 18-14. A pair of Bailey kills had the Spartans within one at 18-17, and again at 19-18 and 20-19, but couldn’t break through. Penn State closed out the match on a 5-2 run. Putaways by Lee, Frantti and Washington and two MSU miscues helped the Nittany Lions sew up the match.

Defensively, Kendall White (Indianapolis, Ind.) was a rock for the Nittany Lions as the sophomore libero scooped up a season-high and a four-set personal-best 29 digs, including 19 over the final two sets. She also added six assists on the evening.

The two teams traded leads to open the first set, but at 9-8, Michigan State took a lead that they would not relinquish until the waning moments of the set. The Nittany Lions were down 23-20, but that did not stop their drive. Through some gutsy choices and aggressive play, the Nittany Lions were able to tie it up at 23. Eventually going on to take the set, 27-25.

The Nittany Lion controlled the second set, putting down eight of their first 10 hitting attempts without an error. The finished the set with a .533 team hitting percentage and saw Frantti lead the way with five kills.

The third set featured high-quality Big Ten volleyball as the two Top-Ten teams battle tooth and nail, with long rally after long rally. White scooped up nine digs in the first set alone, while Lee put down seven kills, including three straight to push the set to extra points, but eventually, the Spartans were able to string together enough in a row to take the set, 27-25.

In the fourth set, Penn State bounced back in impressive fashion. The Nittany Lions opened up the set on a 6-1 run, and never looked back. They put down nine of their first 13 swings without an error. However, Michigan State would not disappoint their home crowd and tied the set at 14. A service run by senior Lainy Pierce put the Nittany Lions back on top. Washington put down seven kills and added two blocks to put away the Spartans.

The Nittany Lions will return home for a lone weekend match as they host Rutgers on Saturday, Nov. 4 for a 7 p.m. match. Saturday will also be Senior Day as the Nittany Lions will honor the eight seniors in Abby Detering, Ali Frantti, Jen Halterman, Simone Lee, Lainy Pierce, Clare Powers, Heidi Thelen, and Haleigh Washington, before the match.