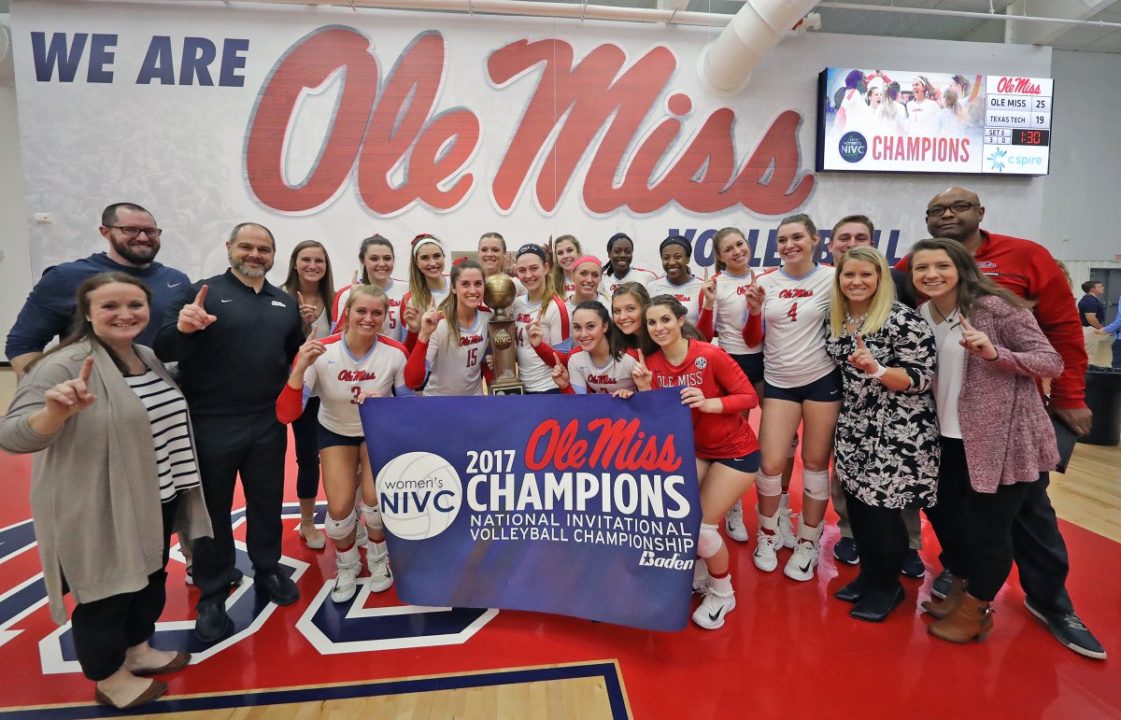 In the first NIVC since its new format and last tournament – 1995 – the Ole Miss Rebels came out victorious over Texas Tech in the Championship match 3-0. It was a strong final performance to end the season, as they kept the Red Raiders from scoring 20 in all three sets.

Ole Miss did it on both ends of the court as they hit .276 while holding Texas Tech to a .114 mark. They did it with strong play in the back row (66-47 in team digs) and a smooth serving match that featured five aces to one serve error compared to one ace and four serve errors from the Red Raiders.

Just like she was in the semifinal round, Emily Stroup dominated with 17 kills, giving her 36 in the two final matches of the NIVC. She also hit .353 for this match and tacked on 11 digs.

Other big performers for Ole Miss were Kate Gibson (nine kills, 15 digs) and Lexi Thompson (nine kills, 12 digs) in their final collegiate match as well as junior Caroline Adams (16 digs), who surpassed the school record for most digs for a season.

In the losing effort for Texas Tech, Chandler Atwood (11 kills, four digs) continued her strong tournament in what could be a springboard to her junior season. While her career is just getting started, Kate Klepetka‘s came to a close with a solid 15 dig performance. Junior Missy Owens also totaled 25 assists, four digs and three kills. Unfortunately for the Red Raiders, no other player logged more than five kills as the Ole Miss serve kept them on their heels.

The two teams also made up four of the six players on the NIVC All-Tournament Team, seen below:

Thank you all for a great tournament!

Ole Miss needed to go through a variance of different opponents to reach this point, as they downed a pair of mid-majors before taking out SEC-foe Georgia. That took them to a Big 12 semifinal party, where they were the lone school outside of the conference. They defeated West Virginia before earning this one to complete the NIVC Championship run. In total, they lost just one set in their five-match run as they add a trophy to their case in Oxford.