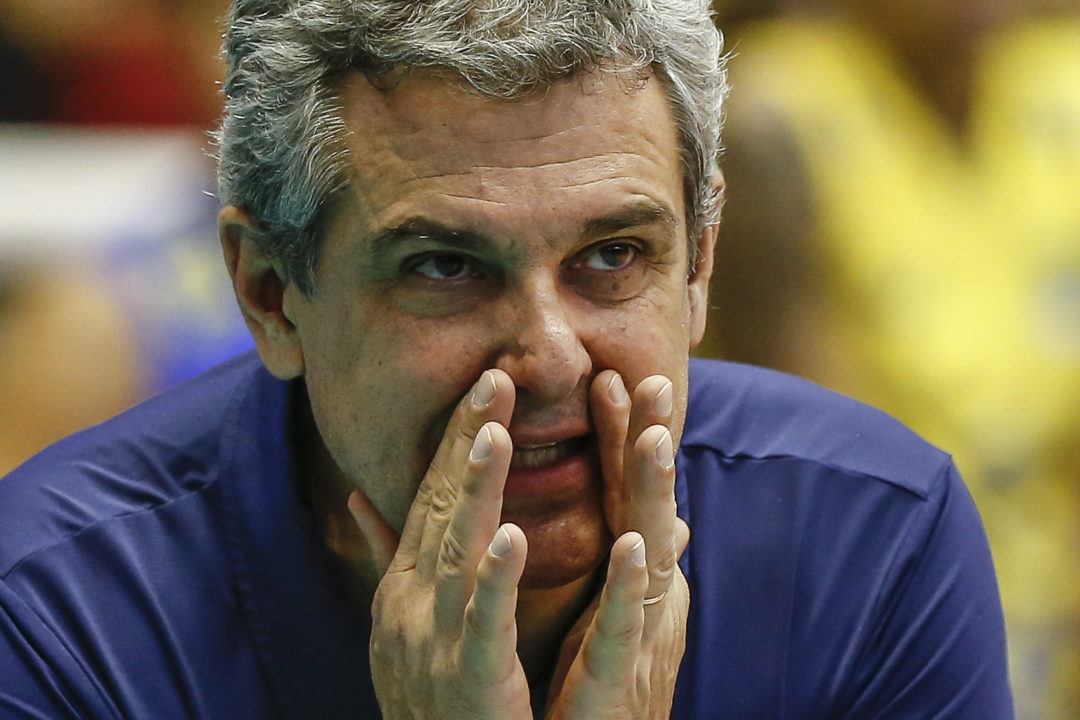 José Roberto Guimarães is back at Superliga after a two-year long hiatus with recently promoted Hinode/Barueri. Archive Photo via FIVB

It is not unusual for coaches to become bigger stars and household names than players in his or her teams. In American sports tradition this is readily noticed. Consider, for example, the likes of San Antonio Spurs’ coach Greg Poppovich, New England Patriots’ Bill Belichick, and University of Alabama’s Nick Saban and how their relationship to fan hood is portrayed.

In Brazilian volleyball, though, things take up a notch, some coaches being bigger stars than the league itself. Undoubtedly, one of these coaches is José Roberto Guimarães. A three time Olympic champion, with both male and female national teams, the 63 year old legend is back coaching at the Female Superliga after a two-year long hiatus. This time, he is leading a personal project he started from the ground up, Hinode/Barueri.

Aside from National Team duties, his last two coaching assignements had been powerhouses Fenerbahçe and now defunct Vôlei Amil. However, Guimarães had always expressed his ambitions of having a team where he considers to be his hometown of Barueri, São Paulo.

Recognizing the time was right, he used his unparaleled recruting ability to enlist the commitment of several high profile players to waive their salaries, playing only for food and housing, and clinch a promotion to Superliga after winning Brazil’s second tier league.

With his spot at Superliga guaranteed, he then used his also unparalleled skills at finding financial support and closed a deal with Grupo Hinode, a cosmetics/multi-level marketing group, similar to USA’s Mary Kay, to be the team’s main sponsor, at a pep-rally attended by thirty thousand supporters.

Guimarães has said that he intends to start slowly, gradually building up his team status in a few years, taking time to invest in youth categories as well. For now, he has fielded a modest, but experienced team, that mixes the leadership and maturity of players such as Olympic bronze medalist Erika Coimbra, and the youthfulness and energy of 22 year old setter Naiane and 21-year old powerful opposite hitter Edinara. Both were third stringers  for the national team at this  year’s FIVB Grand Prix.

His “plans” for a slow build-up into a powerhouse might be thwarted, though, if negotiations with Poland’s superstar outside hitter, Katarzyna Skowrońska, who is already training with the team at Barueri in a “personal trial” speeds up.  Coached by Guimarães at Fenerbahçe in 2011, she accepted the coach’s invitation to train with the team in Barueri to get to know the city and the team’s installations.

It is also rumored that Jaqueline Carvalho, two time gold medalist opposite hitter and massive fan and media darling, is in conversations with the team, even being as far as getting personal sponsorship to cover her enormous salary.

But even without its two top-tier rumored transactions, this team should have no trouble at all securing a comfortable playoff spot by the end of Superliga’s regular season on grit and its coach’s knowledge alone.

BE EXCITED TO SEE: Brazilian volleyball fans are livid for another chapter of one its sport’s biggest rivalries: José Roberto Guimarães x Bernardo Rezende, SESC/Rio de Janeiro’s coach. Although always public denying any bad blood between them, and even complimenting one another’s work, the public knows a lot of rivalry still exists between both legendary coaches and Olympic champions.  The soap opera, which started long ago in the past, stems from controversies from the time when Guimarães used to coach Bernadinho’s wife, a legend of her own Fernanda Venturini, at the national team. Given the visceral and violent on court personalities of both coaches, and the nature of the encounters, even casual fans are anxious for these future matches.