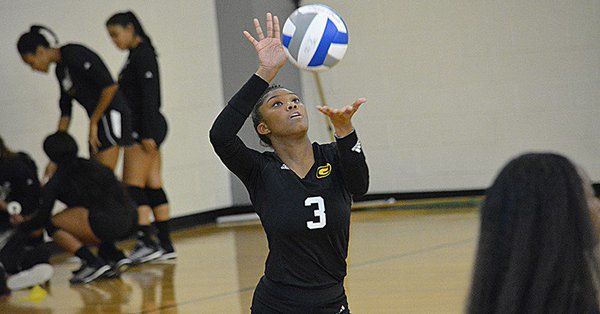 Notable Results
BATON ROUGE, La. – Behind a 16-kill effort from Alondra Rivera Modesto, Alcorn State upended Arkansas-Pine Bluff in straight sets to begin conference play. The win snapped a 31-game slide in league play, which was the second-longest active streak in the country.

Fiapaipai Iosia collected a team-best 11 digs and served up seven aces, as the Lady Braves delivered 12 service aces compared to the Lady Lions’ three. Mae Lewis and Sydney Joseph each put away 10 kills for the Lady Braves. Haley Gomez led UAPB with 10 kills, and Britney Salhmann put up 19 assists and four digs.
—-
BATON ROUGE, La. – Grambling State (2-13, 1-1) clawed out of a 0-2 hole to defeat Alabama State (4-14, 1-1) in five sets during opening night of conference play. The win snaps Alabama State’s 43-match win streak versus conference opponents – the Lady Hornets swept Prairie View A&M earlier in the day – and is Grambling’s first win over Alabama State since 2009.

After falling behind two sets to nil, Grambling broke open a 9-9 set three with a 10-1 run to take control. The Lady Tigers eventually earned a shot at set point, but the Lady Hornets didn’t go quietly as Medearis and Martin powered a 4-0 run that tied the frame at 24. Grambling regrouped as Kayla Doughtry put down a kill, and a Martin attack went awry to give Grambling the set.

Grambling tied the match in a hotly-contested fourth set with a 7-1 run that broke an 18-18 tie, and in the fifth, Nicks was the difference, spiking four kills in the frame, including two of the final three Lady Tiger points that punctuated a 7-2 match-winning splurge.

After Grambling dominated set one to the tune of a 25-14 win, Jackson State controlled matters from there. Grambling committed 19 of its 21 attack misfires in the final three sets as Jackson State outhit Grambling .235 – -.037 in the fourth and final set.

Tielar Richards paced Jackson State with 11 kills in the team’s win over Texas Southern. Masani and Alexandra Burney each posted 17 digs. For TSU, Kirby Anderson had a strong performance in defeat with 13 kills and seven blocks. Breyanna York put up 34 assists for Texas Southern.

Jackson State took the first two sets and was poised for a sweep before Texas Southern shook off a slow start in set three, overrunning Jackson State in the late stages. However, JSU didn’t allow Texas Southern to sustain momentum, keeping TSU at bay down the stretch of the fourth frame.
—
BATON ROUGE, La. – Three Southern players posted double-digit kills as the Lady Jaguars (2-9, 1-1) outlasted Mississippi Valley in five sets to notch their first league win of 2018.

Tyler Caliste led MVSU with 22 kills, the most by a SWAC player this season.

The sides alternated set victories, with Mississippi Valley claiming set four on the strength of two 5-0 scoring runs that bookended the frame. Southern opened the final stanza with a 6-3 advantage, but MVSU tied the match 7-7. Despite Caliste’s hot hitting – she put down five kills in the set – Jolly and Carter managed to carry the Southern offense to victory.

Carter accounted for half of the Jaguars’ final six points, and Jolly closed the book on a potential Devilette comeback with the match-ending spike.