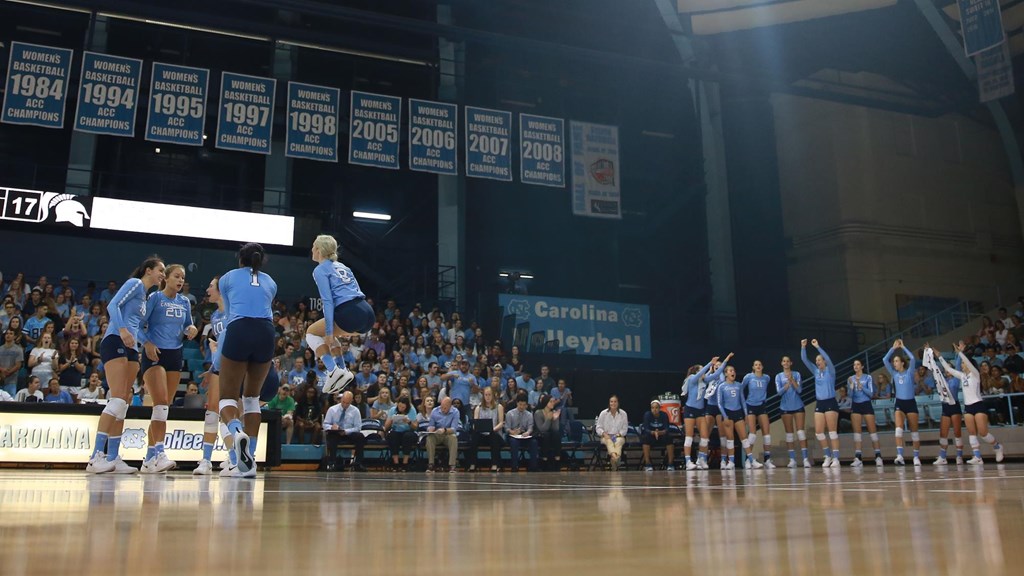 The Tar Heels used 15 blocks and a .196 hitting effort to best the Wolfpack. NC State boasted a 55-52 lead in kills and 4-1 edge in aces, but committed 27 errors in the match, managing just a .172 hitting efficiency. The Wolfpack hit .026 in the final stanza with nine kills and eight errors.

Destiny Cox paced the UNC offense with 19 kills, while also adding four blocks. Ava Bell chipped in 12 kills and a team-best 12 blocks, while hitting at a .400 clip. Hunter Atherton added seven putaways, seven stuffs and six digs to her 44 assists, while notching a team-leading .600 hitting effort (7-1-10).

Teni Sopitan led the way for the Wolfpack with 19 putaways, while Melissa Evans (14) and Jade Parchment (11) followed. Evans rounded out a double-double with 12 digs, while Parchment added 14 digs to her tally. Kylie Pickrell tallied a double-double of her own with 46 assists and 13 digs. Lauryn Terry led the defense with five blocks.

The Wolfpack jumped ahead 8-2 with two kills each by Evans and  Sopitan. An ace by Pickrell put NC State up seven at 20-13 and the teams traded points from there, until putaways by Parchment and Sopitan sewed up the victory.

Set 3 featured 10 ties, last at 22, and the lead changed hands five times. After trailing 14-12, NC State rallied to take a three-point lead of its own at 20-17. Sopitan notched three kills and Parchment added two in the rally. The Tar Heels countered with a 4-0 run, including two blocks, to regain the advantage at 21-20. The teams tied at 21 and 22, before a block by Atherton and Bell and a Skylar Wine putaway put UNC on the hill at 24-22. A Pickrell kill kept the set going, before a hitting error ended the stanza at 25-23.

Set 4 was again a back-and-forth affair. Down 16-14, the Wolfpack scored eight of the next 12 to turn the tables and take a 22-20 lead of its own. Four errors and an ace by Kassie Kasper highlighted the run. The Tar Heels rebounded and closed out the match with five straight points, the last four on blocks by Atherton and Bell.

With the win, UNC coach Joe Sagula stands at 799 career victories with a Friday match at Virginia Tech on the horizon.

North Carolina now boasts an 87-31 all-time lead in the series and have won back to back meetings in the series, including a four-set win in Chapel Hill last season (10/18/17).