Serbia Makes a Statement in Front of Italy’s Home Crowd 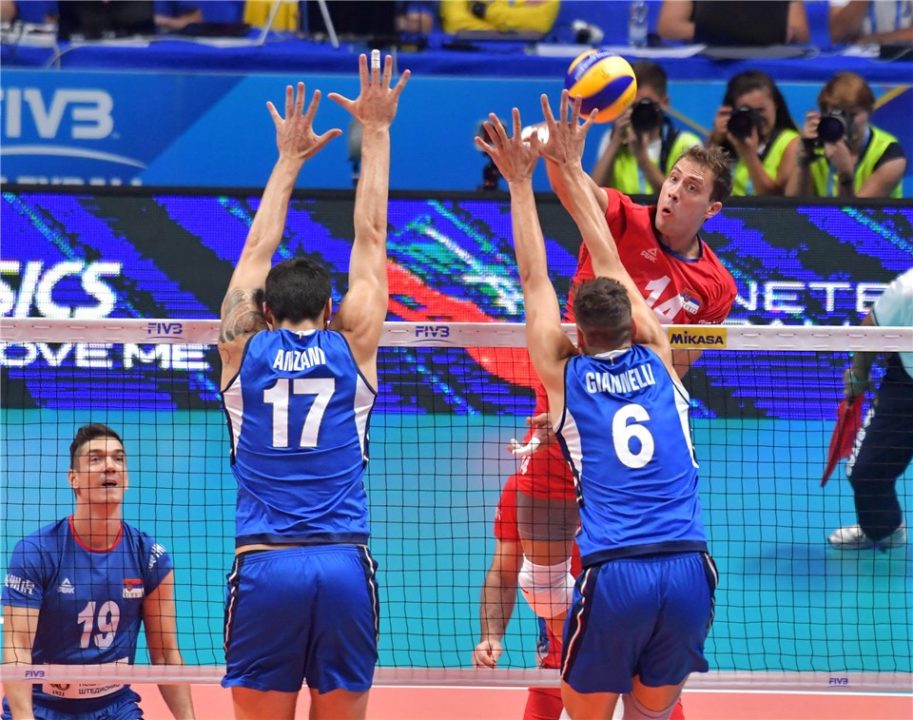 Aleksandar Atanasijevic powered his way to 16 kills in Serbia's commanding sweep over Italy in the World Championships Final Round.  Current Photo via FIVB

There were some complaints by members of the French media saying that Serbia threw their match against Poland on the last day of  Round 2 so that France would not advance to the Final Six. Nikola Grbic maintained his team needed to conserve energy for the Final Six, so he even used his bench players in the 3-0 defeat. If that was his plan, it worked like a charm. Serbia got out early and stunned the hosts, Italy, in front of 11,700 shocked fans.

Serbia put a tremendous amount of pressure from the service line behind 4 aces from Marko Ivovic. The Serbians also got 5 aces from their middle blockers. Srecko Lisinac contributed 3 aces, and Marko Podrascanin chipped in 2. Uros Kovacevic also scored on an ace for a team-total of 10. Italy, by contrast, only scored 1 point from the service line from Ivan Zaytsev.

In order for Serbia to have success in big matches, they rely on high point-productions from the right side. Aleksandar Atanasijevic got the start at opposite and put away 16 kills. He posted 57.1% efficiency rating in attack. He also led the team with 3 blocks to finish with a match-high 19 points. On the other side of the net, Zaytsev scored 9 points on 7 kills, 1 block, and 1 ace from the opposite position for Italy. He struggled to put a ball away, hitting only 29.2% on the night. A match like this must make Perugia feel good about their decision to keep Atanasijevic in their lineup at opposite and letting Zaytsev move to Modena.

Though the management at Perugia must not be happy with what they saw at the outside hitter position. When Zaytsev left, they needed another Italian outside hitter and decided to deal Aaron Russell to Trentino for Filippo Lanza. The Italian outside hitter was just 4 out of 13 (30.8%) in attack and had a very rough outing in serve receive. He was replaced by Gabrielle Maruotti in the 3rd set. Maruotti only scored 1 point on 1 kill with a 20% hitting percentage. Osmany Juantorena only scored 4 points on 4 kills in 11 attempts for Italy.

The lone bright spot for Italy was Daniele Mazzone. The middle blocker led Italy with 11 points on 6 kills and a match-high 5 blocks. Italy actually held a 9 to 6 advantage in blocks. Simone Anzani was the next-best blocker with 2 blocks in the middle. Anzani also added 2 kills to finish with 4 points. Italy’s coach, Gianlorenzo Blengini tried both Simone Gianelli and Michele Baranowicz at setter, but they only combined to lead Italy to a 36.9% attack average.

Grbic acknowledged the role in throwing off the efficiency of Italy’s attack and the aggressive serve had in the match’s result. “With a fantastic defense and the will to fight for every ball, nights like this are possible, he said. “We also took advantage of a very effective serve and created many problems to our strong opponents.”

Nikola Jovovic set Serbia to a 57.9% efficiency rate in attack. In addition to Atanasijevic’s 16 kills, Uros Kovacevicalso added 10 kills to the stat page. He also scored a point from an ace to end the match with 11 points. Ivovic added 6 kills to his 4 aces to reach double-digit points. Srecko Lisinac scored 10 points on the night. He hit 75% on his way finishing with 6 kills. He also added a block to go with his 3 aces and finish with 10 points. Marko Podrascanin scored 5 points on 2 kills, 2 aces and a single block.

Serbia will come right back and play Poland on Thursday. With the stakes much higher, it promises to be a much more competitive match than Poland’s sweep on Sunday, September 23rd.