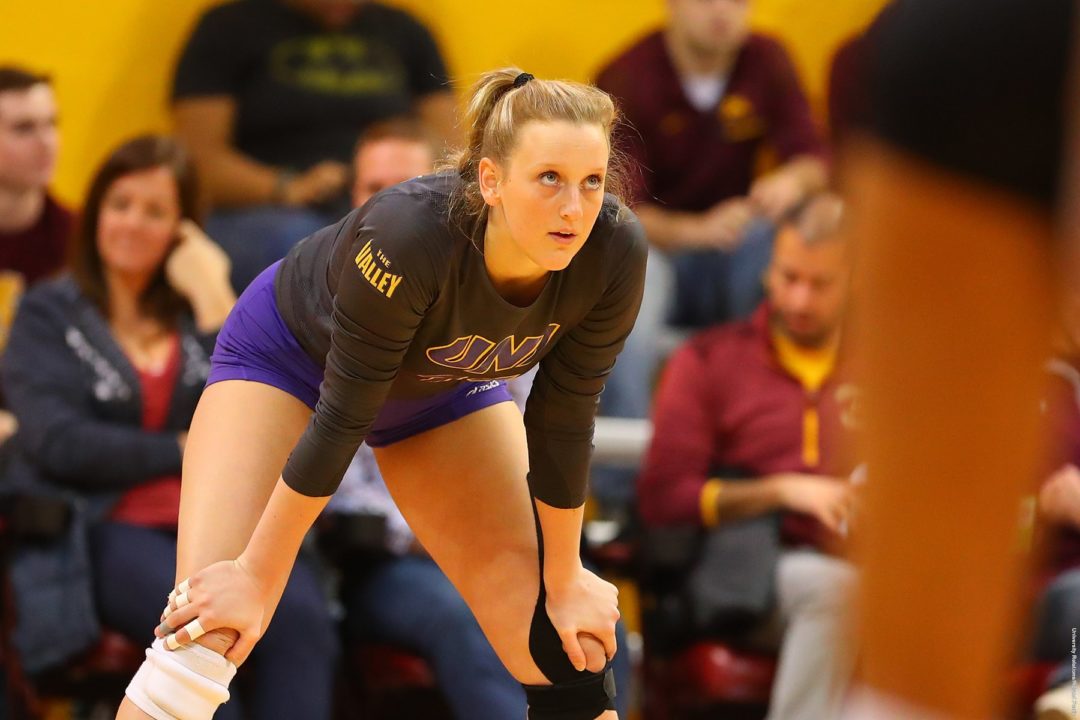 UNI's Karlie Taylor and Illinois State's Courtney Pence made the MVC honor roll for the week as player and defensive player of the week respectively. Indiana State setter Makayla Knoblauch was named the top rookie.  Current Photo via UNI Athletics

Offensively, Northern Iowa’s Karlie Taylor was the standout, racking up 53 kills against a trio of ranked foes.

Taylor and Pence wound up on the MVC honor roll for the week as player and defensive player of the week respectively. Indiana State setter Makayla Knoblauch was named the top rookie.

Karlie Taylor, Jr., OH, UNI
UNI junior Karlie Taylor led the Panthers with 53 kills en route to a 2-1 record at the USC Trojan Invite in Los Angeles, including wins over No. 13 Creighton and No. 5 Kentucky. She notched 57.5 points with a .246 attack percentage. She also added four blocks, 31 digs, which is second-best on the UNI squad, and a pair of service aces. She led UNI with 4.82 kills per set. She earned All-Tournament Team honors along with junior setter Rachel Koop. She had her most impressive match of the weekend on the opener verses No. 13 Creighton with 18 kills and an efficient .351 attack percentage for a weekend-high 20 points. Against No. 10 USC, she had 17 kills and a .178 attack percentage against the talented Trojan front line. In the thrilling weekend finale, she notched 18 kills with a .231 percentage and 19 total points.

Helping @UNIVolleyball to a pair of upset wins over the weekend with a team-leading 53 kills, in addition to four blocks and 31 digs, Karlie Taylor is the #MVCVB Offensive Player of the Week! pic.twitter.com/UO9jyv3cAT

Courtney Pence, Sr., DS, Illinois State
Illinois State senior Courtney Pence started all three matches for the Redbirds this weekend, as Illinois State went 2-1 at the Benson Hospitality Invitational. The senior collected 65 total digs, including a game-high and MVC game-high 34 against Georgia, averaging 5.91 digs per set – the most among defensive players in the Valley through the opening weekend. She was a major piece of an Illinois State defense that held Coastal Carolina to a .071 hitting percentage in the Redbirds’ sweep of the Chanticleers. Pence finished the weekend with four service aces, including two against the Bulldogs, and committed just a single reception error. The Springfield, Illinois, native was one of two Redbirds to be named to the all-tournament team.

For the 11th time in her career, Courtney Pence (@CourttyyP3) is the @MVCsports Defensive Player of the Week 💪❌

Makayla Knoblauch, Fr., S, Indiana State
In her first weekend of collegiate play, Indiana State’s Makayla Knoblauch tallied 129 assists and 10.75 assists per set – both marks ranking second in the Valley over the weekend. In addition to serving as Indiana State’s primary setter in her first collegiate action, starting in all three matches, Knoblauch also hit .346 with 10 kills to her credit. She also added 25 digs, 5 total blocks and 2 aces in a well-rounded effort, leading the Sycamores to a runner-up finish at the Purdue Fort Wayne Invitational.