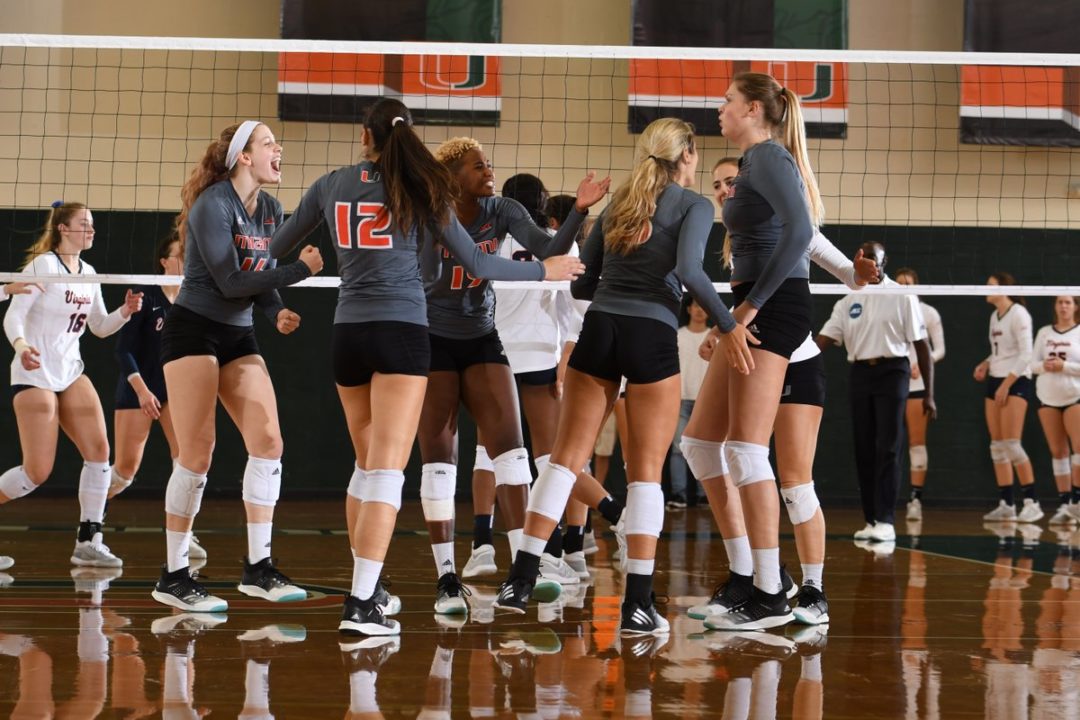 The visiting Miami Hurricanes recorded their 19th victory of the season in straight sets over the Virginia Tech Hokies. Archive Photo via Miami Athletics

The Miami Hurricanes defeated the Virginia Tech Hokies in straight sets behind eight service aces from junior setter Haley Templeton, who also paced the visitor’s offense by dishing out 31 assists.

The Hurricanes received other key contributions from senior libero Sylvia Hernandez (12 digs), and senior outside Olga Strantzali (10 kills), who has recorded double-figure kills in every Miami match this season.

Next up, Miami travels to Atlanta for a Wednesday tilt against Georgia Tech, while the Hokies host Virginia, also on Wednesday.

Strantzali picks up her 10th kill of the match to extend her streak of double-digit performances, but more importantly, MIAMI WINS, 25-14 and 3-0! ????

The University of Miami volleyball team closed out the weekend with a convincing 3-0 win at Virginia Tech in the Cassell Coliseum Sunday afternoon.

Just like Friday night, the Hurricanes (19-5, 13-5 ACC) jumped out to a 2-0 lead before the intermission, but this time they saved the best for last. Miami dominated the Hokies (9-20, 3-15 ACC) in the final frame for the 25-19, 25-22, 25-14 sweep. With the victory, Miami earned its fourth season sweep over Virginia Tech, just like it did against Virginia Friday. For the second time this season, the Canes have a four-match winning streak.

Strantzali has finished with double-figure kills in all of Miami’s 24 matches this season. Dill hit a team-best .455. Redshirt junior setter Haley Templeton aided the offense with a match-high 31 assists, while also picking up four kills on a .444 hitting percentage. She also recorded career-high eight service aces.

Senior libero Sylvia Hernandez led the Hurricanes with 11 digs. Carol Rafferty led the Hokies with nine digs, while the Hokies had 38 digs to Miami’s 31.

Lukianova and Dill teamed up for three blocks in Blacksburg, while Pampana picked up the Hurricanes’ only solo block as the Canes doubled up their opponent in a low-blocking contest, 4-2.

Despite a closely contested start of the match, serving sequences by Miami’s setters Templeton and sophomore Hannah Sorensen helped the Hurricanes orchestrate a 10-2 run on their way to a 25-19 triumph in the opening frame. The Canes picked up 15 opening-set kills while committing only four errors.

The Hurricanes took the second set – which featured 11 tied scores – 25-22 with the help of a 5-2 run at the very end of it. Virginia Tech came within one at 23-22 through back-to-back kills from Jaila Tolbert and Talamazzi. But following the Hurricanes timeout, Strantzali and Lukianova did the same to prevent further drama in the set. The close fight of the set could be judged by the team’s hitting percentages – .235 for Miami and .219 for Virginia Tech. Strantzali went into the locker room with eight kills for Miami, helped by 22 Templeton assists through the first two sets.

The Canes completed the sweep in the third set despite winning only one of the final six points. Four aces on the same serving sequence by Templeton gave the Hurricanes their largest lead and first match point at 24-9. A kill by Talamazzi inspired the Hokies to a late 5-0 run that forced a Miami timeout, but their back row finally gave in as Templeton set up Strantzali for her final kill of the day to clinch the match.

After a short turnaround, Miami will play its final two matches of the regular season in the next five days, visiting Georgia Tech on Wednesday and Clemson on Friday. The NCAA Championship selection show is set for 9 p.m. on Nov 26.

Hokies fall to Miami at home

Cunningham hits a career-high .800 on 10 attacks

BLACKSBURG – In its final match on a Sunday this season, the Virginia Tech volleyball team was defeated by Miami (Fla.), 3-0, at Carilion Clinic Court at Cassell Coliseum.

The Hokies (9-20, 3-15 ACC) were led by senior Cara Cunningham, who tallied eight kills on 10 errorless swings and a block. Outside hitter Olga Strantzali carried the load for the Hurricanes (19-5, 13-5 ACC) with a team-high 10 kills and four digs.

Starting off the match with the lead, Miami gained an 11-7 advantage, forcing Tech to take a timeout. Out of the break, the Hurricanes kept it going and pushed their lead to 18-11, before junior Jaila Tolbert rattled off two kills in a row followed by one more to cut it to 19-14. Both sides would trade points after Tolbert’s run, scoring five each until Miami’s Elizaveta Lukianova put down a kill to win it, 25-19.

With the score knotted at 7-7 after a Rhegan Mitchell kill, the largest advantage a team would sustain was two points all the way up to 23-20 in Miami’s favor. In between the 11 ties and six lead changes, freshman Ester Talamazzi went off, drilling six kills and three digs. Trailing by three points at 23-20, head coach Jill Wilson’s squad clawed back to make it 23-22, but the ‘Canes would call a timeout and proceed to score the next two points following the break to claim it, 25-23.

Miami began the final frame scoring eight of the first 10 points, causing Tech to take a timeout. Following the pause in action, the Hurricanes extended their lead to eight points at 15-7, making the Hokies burn another timeout. Miami would storm off on a 9-2 run to get it to match point, but Tech put together a 5-0 run behind two kills from Talamazzi and one from Tolbert. However, the ‘Canes scored the final point to take the stanza, 25-14, and the match.

– Cunningham posted eight kills to hit a career-high .800 (minimum 10 attacks). The eight kills were her second-most of the season and the highest mark since opening weekend. It marks the second time this fall the middle blocker has not made a mistake on an attack, and her fifth-straight match of owning five or more kills.

– Mitchell was close to another double-double, dishing out 26 assists and being just two digs shy of 10, while earning a kill. She has racked up 15 kills in the month of November from the setter position.

– Sophomore Carol Raffety scooped up a team-high nine digs and posted four assists. Since her career-high seven assists versus Duke on Oct. 22, the libero has turned in 31 assists in her last nine matches.

– Tolbert registered seven kills on a hitting clip of .375, as well as chipping in five digs. The Minnesota native has collected 17 digs her last three contests, marking her best three-match stretch of the fall.

– Talamazzi followed up her best performance of the month with another one, tallying a team-high 11 kills, seven digs and an assist. The Italy native racked up 26 kills and 12 digs on the weekend.

– Cunningham’s hitting percentage of .800 is the second-highest of any Hokie this year, almost topping the mark of freshman Marisa Cerchio’s .833, when the squad took on Toledo on Sept. 9.

The Hokies will get a short time of rest as they compete again on Wednesday versus Virginia at 4 p.m. ET at Carilion Clinic Court at Cassell Coliseum.