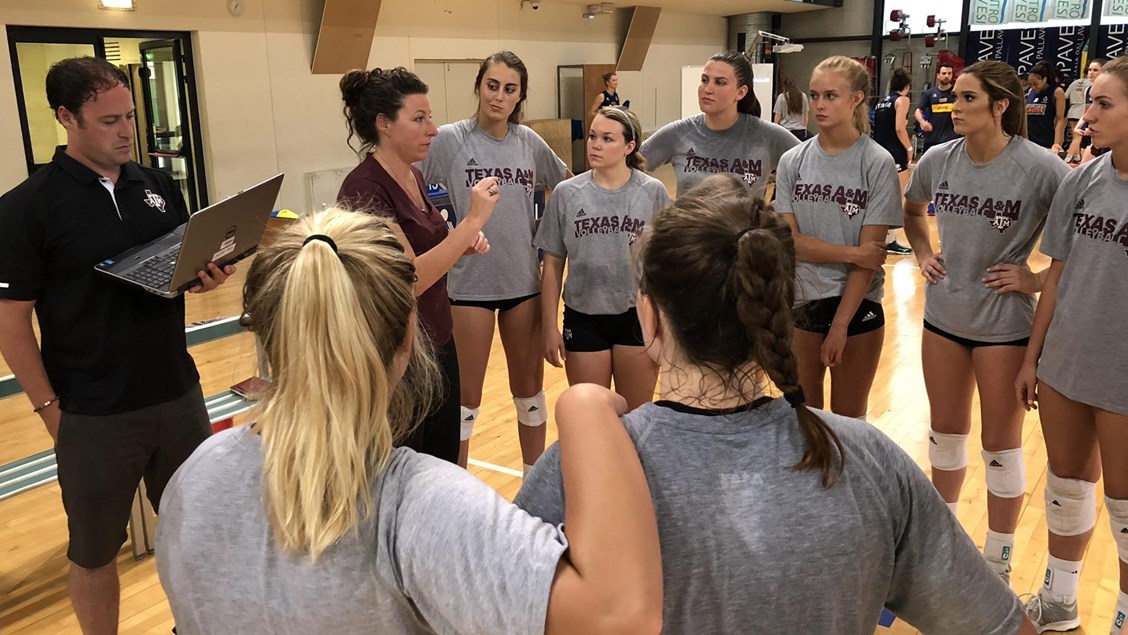 Club Italia used a 5-0 run to break away from a 6-6 tie in the opening set and continued to lead the remainder of the frame. The host team went on to build its largest lead at 22-13. A&M got within 23-16 following an ace by Haley Slocum, but Club Italia used back-to-back kills to closed out the set.

There were 11 ties in the second set. The Aggies used a three-point run consisting of a kill by Hollann Hans and back-to-back aces by Camille Conner to tie the score for the ninth time, 19-19. The Italians ended the run with a kill, but Hans countered with a kill and two aces to put the Aggies on top, 22-20. A kill by Club Italia and an A&M attack error tied the score for the final time before A&M reeled off three straight points, including a block by Samantha Sanders and London Austin-Roark that clinched the 25-22 win to even the match at 1-1.

A&M carried the momentum into the third set, scoring the first five points and carrying a six-point lead at 14-8. Club Italian then scored five unanswered points to tie the set for the first time. The Italians later took their first lead at 18-17, but the Aggies tied the score four times before retaking the lead at 22-21. The Italians, however, countered with three straight points to be serving for the set, 24-22. Hans staved off one set point with a kill before Club Italia countered with a kill to win, 25-23, and take a 2-1 lead in the match.

Club Italia held a 20-17 lead in the fourth set when A&M rallied. The Italians hit wide and then got stuff blocked by Morgan Davis and Mallory Talbert. A&M served into the net on the ensuing play, but Davis got a solo block and Amy Houser served an ace to tie the score, 21-21. After a long, exciting rally, Makena Patterson ended the play with a kill to give the Aggies a 22-21 lead. Club Italia tied the score with a kill, but Brookah Palmer answered with a kill to put A&M ahead, 23-22. An attack error put the Aggies at set point, but Club Italia connected on a kill to get within 24-23. Hans then secured the win and evened the match and forced a fifth set as her attack from the back row caromed off the Italians’ block for the set-winning kill.

Hans and Patterson provided strong play at the net during a 4-0 run that gave the Aggies a 7-5 advantage in the final set. The lead was short lived, however, as Club Italia went on a 7-1 run to go up 12-8. A&M got within 12-10 and 13-11 before an A&M service error followed by an attack error ended the set and gave Club Italia the 3-2 victory.

The Aggies are now off until they officially report for preseason training on August 7. They will host an exhibition match against TCU on August 18 at Reed Arena and then open a new era of Aggie volleyball as first-year head coach Laura “Bird” Kuhn takes the team to the Ohio State Tournament and the season opener against Ohio on August 24.

On how the team progressed throughout the tour…

On what she learned about the team during the tour…

“I learned that it came down to end game, so we need to work on the last five to 10 points. Finishing is key.”

On what she is looking forward to most this fall…

May 18  Depart for Rovinj & Pula, Croatia