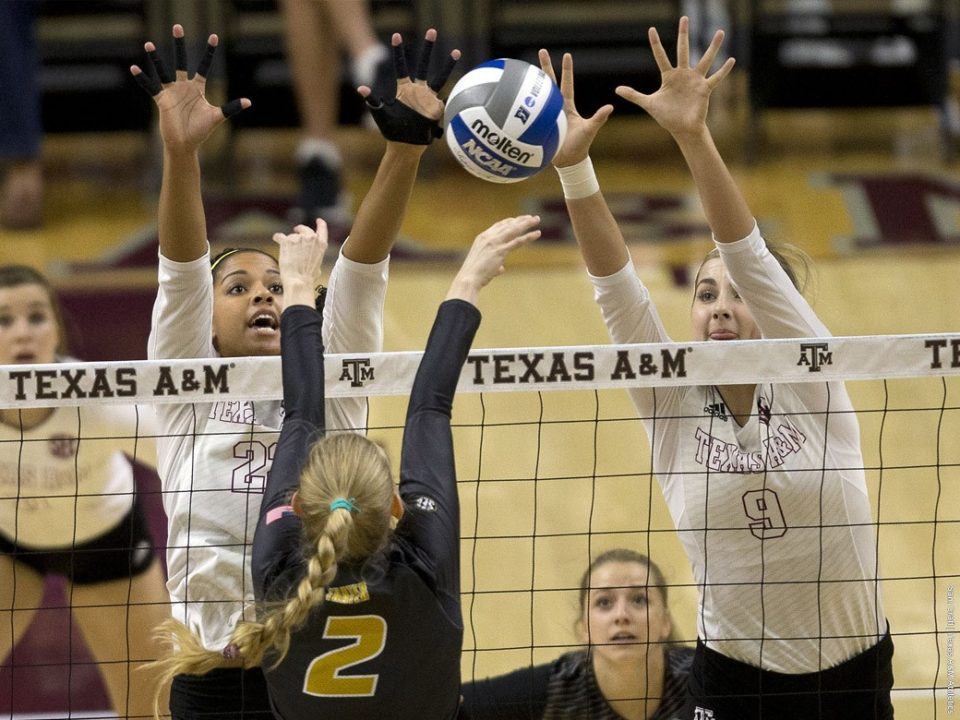 Mizzou's undefeated streak in the SEC came to an end as Texas A&M rallied from one set down to win the match in four. Current Photo via Texas A&M Athletics

The two newest members to the Southeastern Conference faced off yesterday, with Texas A&M coming away with the victory. This was Missouri’s first SEC loss of the season, and it marked the end of the Tigers’ 13-match win streak.

Mizzou had three players with double-digit kills: Kira Larson (15), Carly Kan (14) and Emily Thater (11). Kan played a well-rounded match with 2 aces and 13 digs. Alyssa Munlyn led the Tigers in blocks with 5, and Courtney Eckenrode led the team in assists with 45. Alexa Ethridge tallied the most digs in the match of any player with 19.

Texas A&M plays it next match away against South Carolina on Sunday, October 30th, at 4 p.m. (E.S.T.) at the Carolina Volleyball Center. The Aggies swept the Gamecocks in their previous meeting two weeks ago. Mizzou returns home this Sunday against Mississippi State. The first serve is scheduled for 1:30 pm (C.T.) at the Hearnes Center.

A post-match recognition in front of the home crowd had already been planned to honor Texas A&M head coach Laurie Corbelli and associate head coach John Corbelli, who recorded their 500thvictory at the helm of the Aggies with A&M’s road win at Georgia last week. The Aggies made the ceremony—as well as the coaching duo’s 501st victory—extra special by knocking off the Tigers, who entered the match atop the SEC standings with a 9-0 record and riding a 13-match win streak.

It was Texas A&M’s seventh victory over the last eight matches as the Aggies improved to 13-7 overall and 7-2 in the SEC to close out the first half of conference play. Missouri dropped to 18-4 overall after suffering its fifth consecutive loss in the series against the Aggies and joins Kentucky and Florida with one loss in league play.

Senior middle blocker Jazzmin Babers led all players with seven block assists, giving her 446 for her career and putting her within 10 block assists of tying the school’s all-time record for block assists.

Texas A&M got off to a strong start, jumping out to a 16-11 lead in the opening set. The Tigers quickly got back into the set, going on a 6-1 run to tie the score at 17-all. The teams exchanged points and the Maroon and White held a 19-18 edge before Missouri reeled off four unanswered points to take its first lead, 22-19. The Tigers, who outhit A&M, .133 to .089 in the frame, went on to take a 24-20 lead. The Aggies fought off two set points, getting back-to-back kills by Babers and Hans before Missouri’s Carly Kan put down her fifth kill of the set to close out the win.

Texas A&M used a 6-0 run to go up 9-4 in the second set, and the Aggies stayed in the lead for the remainder of the set. A&M kept its five-point advantage at 16-11 before the Tigers began to chip away, using a 4-1 run to get within 17-15. Missouri stayed within two points at 19-17 before McGee and Reasor had back-to-back kills, and an ace by Aiple put the Aggies ahead, 22-17. The cushion quickly evaporated as A&M committed four errors during a 5-1 Missouri run that put the Tigers within 23-22. Blake then punished the Tigers for an overpass with a kill that put A&M at set point, and Kan hit wide on the next play to close out the 25-22 win for A&M, evening the match at a set apiece.

Missouri overcame a three-point deficit early in the third set and took its first lead at 11-10 after A&M hit into the net. The Aggies quickly got on track and began to separate from the Tigers with a 10-3 rally that put A&M up, 20-14. A&M, which outhit the Tigers, .382 to .195, went on to build its largest lead at 23-16 on a block by Babers and Reasor. Missouri got back within 23-18 before Reasor put the Aggies at set point with a kill. The Tigers stayed in contention with back-to-back kills, but the rally ended when they served into the net to close out the 25-20 win for the Aggies, giving A&M a 2-1 lead in the match.

There were 17 ties and nine lead changes in an intense and nerve-wracking fourth set. Except for A&M’s 4-1 lead at the beginning of the set, neither team held more than a two-point advantage. Missouri took its last lead at 19-18 following a Kan kill and an A&M attack error into the net. A kill by Blake knotted the score at 19-all, and Missouri then hit wide to return the lead to the Aggies. Missouri would tie the score at 20-20 and again at 23-23 before Babers and McGee put down back-to-back kills to clinch the victory.

Kira Larson had a team-high 15 kills for Missouri, which not only was playing without season kill leader Melanie Crow, but also lost her back-up, Sydney Deeken, to an apparent ankle injury midway through the first set.

Texas A&M begins the second half of its conference slate Sunday as the Aggies hit the road to take on South Carolina. First serve is at 3 p.m. (4 p.m. ET) at the Carolina Volleyball Center. Texas A&M swept the Gamecocks, 25-6, 25-15, 25-18, when the teams met just over two weeks matches ago at Reed Arena.

The match will be televised on the SEC Network with Holly McPeak and Sam Gore calling the action.

The Tigers earned a gritty opening set victory after falling behind 16-12 at the midway point. Mizzou used a key late 4-0 run and 3-0 run to set up set point. Senior Carly Kan (Honolulu) tallied her team high fifth kill of the first set, securing a 25-22 triumph.

Mizzou’s first set rally occurred after junior Sydney Deeken (California, Mo.) suffered an injury that took her out of the match. In her first appearance of the year, sophomore Paige Perego (Ballwin, Mo.) stepped in for Deeken and delivered a key kill and block to aid Mizzou’s comeback.

Texas A&M used strong defense and improved hitting en route to its 25-22 second set victory. Mizzou struggled to find consistency throughout the set, but a string of late Aggies errors made it only a one point deficit (23-22 A&M). The Tigers later suffered a pair of mistakes of their own, as Texas A&M evened the match at one apiece.

The Aggies delivered their strongest offensive set of the evening in the fourth set, keying a 25-20 triumph over Mizzou. The Tigers defense only managed one total block in the set, as Texas A&M posted 16 kills on .382 hitting (three attack errors). Larson once again paced Mizzou’s offense, adding six additional kills to her evening’s total.

Junior Courtney Eckenrode (The Woodlands, Texas) remained active at setter, securing her fourth double-double of the season in the fourth set.

Mizzou continued to show impressive grit and competitiveness in the fifth and final set. The Tigers and Aggies went back and forth throughout, before the home team ultimately claimed a match-clinching 25-23 set win.

Mizzou returns home on Sunday, Oct. 30, with a contest against Mississippi State. First serve is scheduled for 1:30 pm (CT) inside the Hearnes Center. Fans can watch the match live on SEC Network + via WatchESPN.