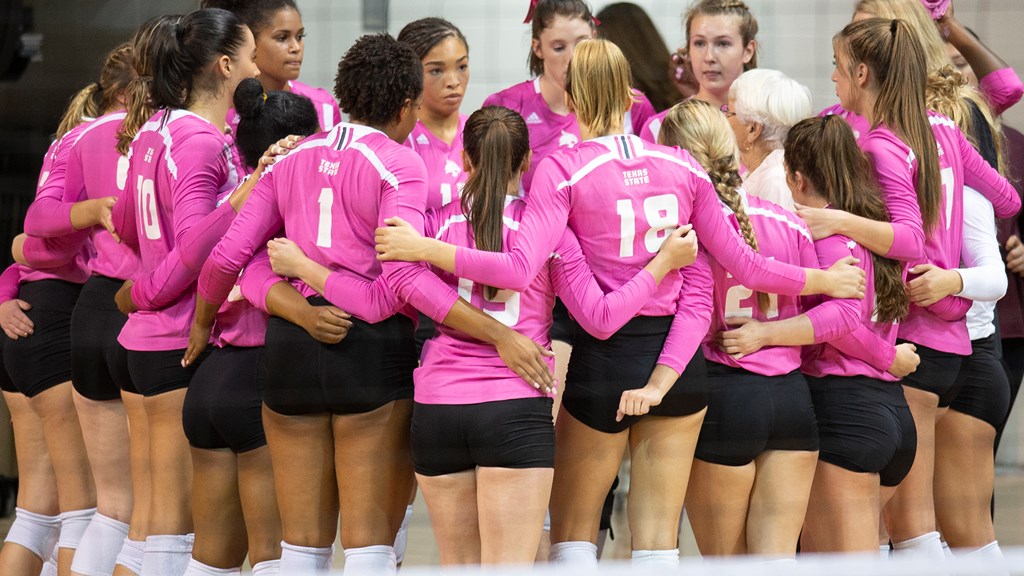 Skylar Ball and Lauren Reichard both led GS with 12 kills each. Maddie Bryant added 11 digs and 10 kills for the losing side. Madison Brown tallied 44 assists, while Joscelin Morrow (15), Katelynn Riner (13) and Camila Gomez (13) combined for 41 digs.

Texas State had an opportunity for the sweep in Friday’s match, but Georgia Southern mounted a huge rally to win the opener 25-23. The maroon and gold got on top 15-10 and later 20-13, but the home side closed on a 12-3 run to snatch the first frame by the narrowest of margins.

The Bobcats scored the first four points of the second and never looked back, tying the match with a 25-14 set triumph. They jumped on top 10-4 and later 21-10 before finishing off the period by the 11-point score line.

The third set was much closer than the second, but the result was still the same with TXST winning 25-21. GS initially turned a 7-4 deficit into an 11-8 lead. The Eagles played even with the Bobcats all the way until 15-15, when a 5-0 run from the visitors turned the tide of the evening. TXST was able to side-out with GS the rest of the frame to take their first lead of the match.

The maroon and gold shut the door on the Eagles by winning the final set 25-22. Texas State scored each of the first five points and looked to be cruising to victory, but the home side had other ideas. Georgia Southern quickly scored six of the next seven points to tie the match back up, and neither team led by more than one point until a 4-0 Eagle run gave the home team an 18-15 lead. GS fought hard to send the evening into a decisive fifth, but Texas State powered into one final 10-4 run to end the night.

Texas State improved to 6-0 all-time against Georgia Southern. The Eagles did, however, manage to win their first set ever in the series history.

The maroon and gold will close out its weekend with a 5:30 p.m. match Oct. 6 at Georgia State in Atlanta.