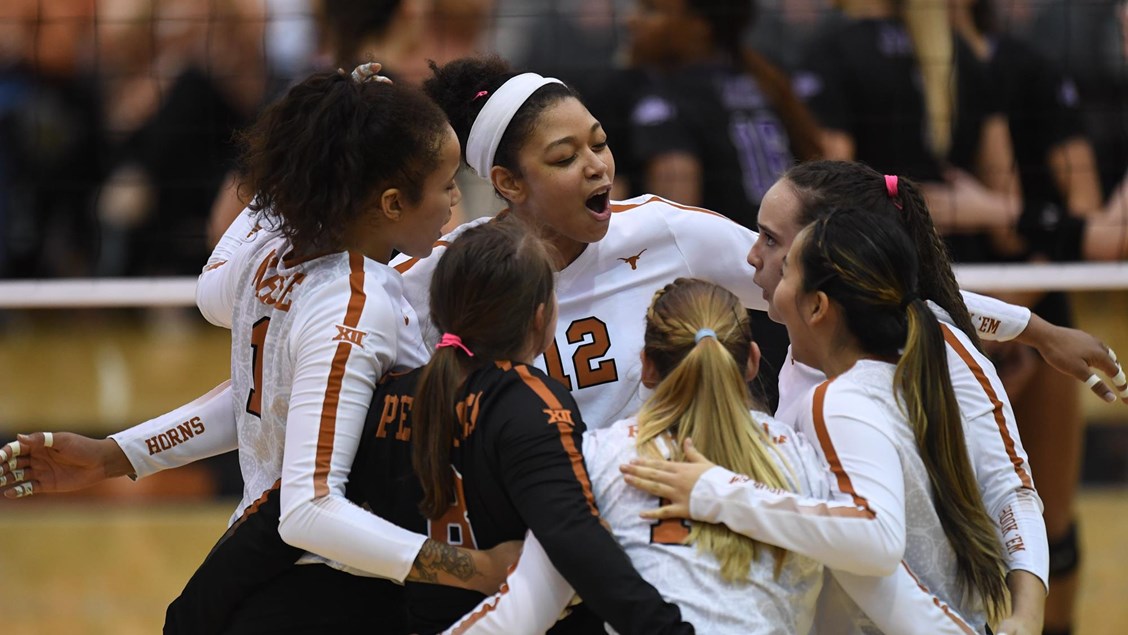 Texas advances to the 2nd rd and improves to 32-0 in NCAA 1st rd matches.

Texas will play Texas State in the second round of the 2018 NCAA Tournament on Friday November 30th at 8 p.m. CT. The match will be televised on the Longhorn Network.

-The Longhorns have hit .309 or better in six-straight matches and nine out of the last ten

-The Longhorns are currently on an 11 game win streak

-Texas has swept 12 opponents this season

-White had double-digit kills for the 23rd time this season

-Eggleston’s .591 efficiency was a career high

-Petersen has double-digit digs in 19 matches this season

-Hahn has double-digit digs in three matches this season

AUSTIN, Texas – One of the best seasons in the history of SFA volleyball came to an end Thursday night at Gregory Gym as the Ladyjacks dropped a 3-0 decision to fifth-ranked Texas in the opening round of the NCAA Tournament.

SFA’s loss put an end to the nation’s longest winning streak. Headed into their opening round NCAA Tournament showdown against the Longhorns, the Ladyjacks had won their previous 29 matches dating back to Saturday, Sept. 1.

SET ONE | #5 Texas 25, SFA 14
• Thanks to some early errors by the nation’s fifth overall seed in the NCAA Tournament, the Ladyjacks got their hands on an early lead.
• Texas committed a trio of unforced attack errors as well as a service error to help SFA jump out to a 6-3 lead on the nation’s biggest stage. McKenzie Brewer added one of her two service aces during that opening run for good measure.
• The Ladyjacks’ lead, however, proved to be short lived. 2018 Big 12 Player of the Year Micaya White and 2018 Big 12 Freshman of the Year Logan Eggleston each pounded down a pair of kills during a 7-2 run by the Longhorns that handed the home team a 10-8 lead.
• Out of a media timeout after the Longhorns opened up a 15-9 lead, SFA used a kill and an ace from Coleman to fuel a 4-2 run that cut the Texas lead down to 17-13.
• White took over for the Longhorns down the stretch, adding another trio of terminations during Texas’ 8-1 run to close out the frame.
• The Longhorns totaled 17 terminations and hit .364 in the frame while SFA amassed only five kills.

SET TWO | #5 Texas 25, SFA 17
• Once again, the Ladyjacks were able to get the upper hand early on. Daron and Makenzee Hanna teamed up for a block on the set’s first point while Xariah Williams chipped in a kill to keep SFA ahead 2-1.
• An 8-2 response from Texas, however, helped the home team take the lead for the rest of the set. White hammered down three more kills in that surge while Yaazie Bedart-ghani added another two.
• Twice SFA managed to pull within three points but each time the Ladyjacks did so Texas answered with runs of 4-0 and 4-1 to regain control.
• Texas hit .375 in the middle set and turned in 18 kills. For SFA, Xariah Williams powered down four of the the team’s nine kills in the set.

SET THREE | #5 Texas 25, SFA 21
• With their backs against the wall, the Ladyjacks again came out as the aggressors and claimed an early 6-4 lead behind kills from Daron, Makenzee Hanna and Hollas.
• Anyia Williams’ lone termination of the set kept SFA in front 8-7 but Eggleston starred in a key stretch for the Longhorns that allowed the home team to jump in front for good. She finished with three kills in Texas’ 5-1 run that gave the Longhorns a 12-9 lead.
• SFA continued to fight until the bitter end, cutting the Longhorns’ lead down to one point on two occasions. Consecutive kills from Hollas and Coleman made the Texas lead 18-17 before Texas went on a 5-1 run to take a 23-18 lead.
• The Ladyjacks generated 12 of their 26 kills in the final frame and held the Longhorns to 14 kills on a .265 attack percentage.

KEY PERFORMERS/STATISTICS OF NOTE
• SFA hit .063 in the match with Hollas providing team-highs in both assists and digs. Texas hit .336 – the highest single-match attack percentage by an SFA opponent in 2018 .
• The Ladyjacks also saw their nation-leading 11-match winning streak in true road matches come to an end Thursday. Heading into their match against Texas, SFA was the only team in the nation that had not lost a true road match in 2018.
• Brewer concluded her career on a great run from the service line. Through the last four matches, the senior turned in a total of 11 aces through 13 sets played which translated to an average of 0.85 aces per set.
• Brewer, Coleman, Hanna and Peyton Redmond all played in their final matches in an SFA uniform. SFA’s four seniors helped the Ladyjacks return to the NCAA Tournament after a 12-year hiatus.
• SFA established new program records for wins in a season (32), consecutive wins (29) and winning percentage in a season (.914) during its memorable 2018 campaign.
• Eggleston put in a match-high 14 termination while hitting .591 for Texas. White added 12 kills while Bedart-Ghani finished with 11.

QUOTABLE
SFA head coach Debbie Humphreys on the match | “It’s been a wonderful opportunity getting to play. Certainly getting to come into this environment and play somebody the caliber of Texas was something we were really excited about and that experience did not disappoint us in the least. I’m very pleased with our team’s performance. I thought we fought well, I thought we served tough and I thought to the very end we just kept trying to put as much pressure on the Longhorns as we possible could. Just the season as a whole for us has been an amazing ride and there is four months worth of emotions in here ready to come out at any moment.”
…on the challenges that Texas presented | “I don’t know if you noticed, but they (Texas) play the game a lot higher above the net than we do. When you get to this level that really is the difference. I think we’re as good of defensive team, we do some things just as well. I mean we’re as good of a serving team, there are a lot of areas of our game that are just as good as theirs. But the size factor becomes an issue when you start talking about volleyball and we don’t have anybody that jumps as high as a lot of their players do or touches as high so we’re getting a lot of balls hit at us from a lot of different angles that we’re not seeing on a regular basis and they all have got a lot of pace on them. We’re digging balls with pace but not coming from those kind of angles. I think that’s the biggest difference. They’ve got great players, we’ve got good solid players as well, but we just are just not playing the game as high above the net.”
…on receiving the draw against Texas in the opening round of the NCAA Tournament | “We’ve come here three times for the NCAA tournament and we’ve played them in spring matches. We’re very aware of what they bring to the table and what caliber of team they are. We just looked at it as a wonderful opportunity because we do know that upsets happen in sports and the only opportunity you have to get that upset is to get out there and leave everything you got out on the court. Unfortunately, for us it wasn’t enough but I feel very good with our performance because I literally believe we left all we had out there.”
…on where the 2018 season ranks as a whole | “We’ve had some good seasons and this one ranks right up there near the top. You don’t go into a season thinking, ‘Let’s go win 29 games in a row’. You just go in trying to get a little bit better each day, trying to improve, trying to get ready for whatever is next. You take it one match at a time and then all of a sudden you look up and you’re on this crazy win streak and the media and everyone is talking about it. We’re not talking about it, we’re just focused on who’s next. For us, the only reason we know we’re on that kind of win streak is because you guys kept telling us. For us, it was just about who do we have this week and we would prepare one week at a time and get ready ready for the matches that were taking place that week, and try to get a little better every single week. This group, they were very gritty. When the stage was big, when we had some big conference matches or opportunities before conference play started to play some teams we knew could help our RPI, we showed up in the big moments and that was probably the thing that stands out the most about this team. Showing up in the big moments and we were able to go into our bench if somebody was struggling, we were able to go to that depth. We had a little bit more depth than we’ve ever had before.”

SFA junior Danae Daron on showing a lot of fight in the third set and if that’s the mentality of the team | “I just feel like we knew that it could be our last set, so might as well be our best set.”

SFA junior Ann Hollas on showing a lot of fight in the third set | “Being a gritty team has been one of our mottos throughout the season. We’ve always kept fighting no matter the score, we just take it one point at a time.”