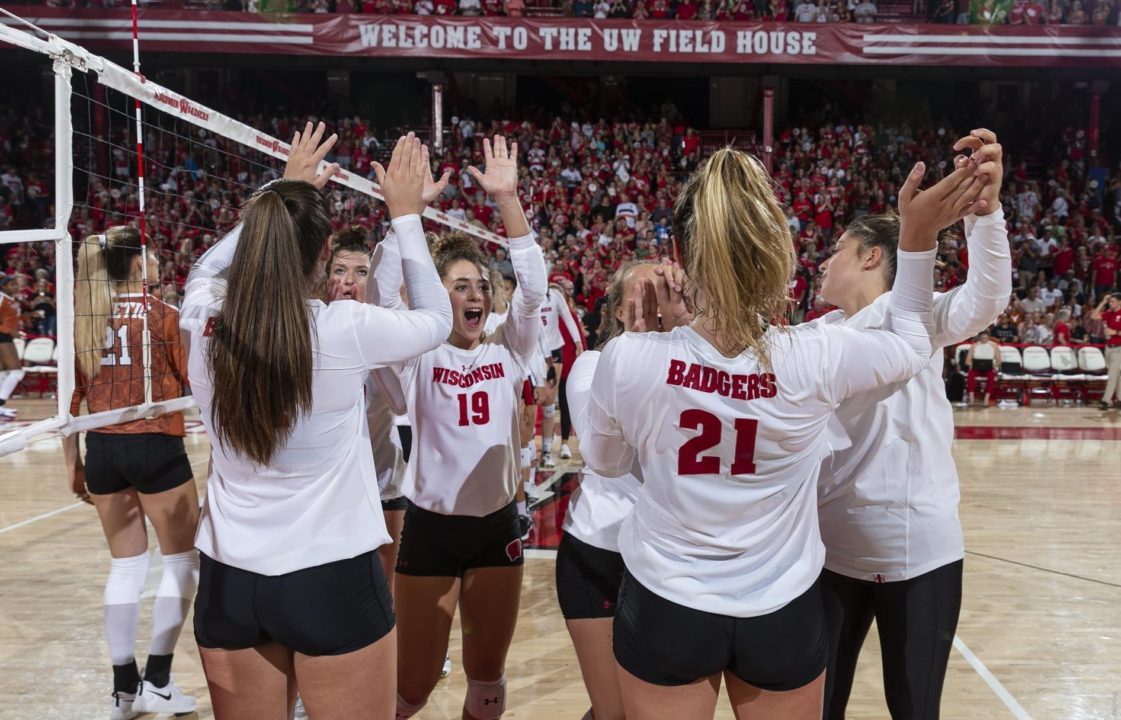 The sixth-seeded Wisconsin volleyball team earned a first-round victory over Green Bay Thursday night at the UW Field House on the first day of the 2018 NCAA Tournament.  Current Photo via Wisconsin Athletics

MADISON, Wis. – The sixth-seeded Wisconsin volleyball team earned a first-round victory over Green Bay Thursday night at the UW Field House on the first day of the 2018 NCAA Tournament. The Badgers swept the Phoenix, 25-9, 27-25, 25-15.

After a quick Wisconsin (23-6) first set victory, Green Bay (20-11) responded with a 5-0 run to start the second set. UW responded to erase the deficit, but the Phoenix rallied again late in the game to serve for two match points. With the set on the line, the Badgers stayed hungry and earned two match points of their own before sealing a 27-25 victory. Wisconsin led from the first point to the final point in the third set en route to a first-round win.

Defensively, Wisconsin out blocked the Phoenix 11-5.5 behind five blocks each from Rettke and Williams. The Badgers also earned a 62-60 advantage in the backcourt. Junior Tiffany Clark and Haggerty both tallied a team-high 15 digs.

Straight from the court
“First of all, congratulations to Green Bay on an excellent season. Like Molly (Haggerty) was saying on the way down, it was hard to score against those guys. Defensively, they played so hard. That libero is as good a libero as we’ve seen this year. I thought she was fantastic, and we knew that going in. She passed at a real high level. Our game plan as we were going on is whatever side she’s on, serve the opposite side. Let’s not even let her get her hands on the ball. Defensively, I thought she was really special.

“I thought it was a good first match. We came out ready to play. Green Bay really upped their game in the second (set), and we were behind there in the end, but I liked how our mentality was to stay with it. You can only control what happens on your side of the net. They were digging like crazy and really serving some pills at us, and I thought we did a really good job of just staying with it and fighting and getting ourselves into the third set. It was a good first win. We’re excited to still be playing.”

“I think that’s what’s so great about the Big Ten. Especially that Penn State match, those matches just give us so much confidence. Every single day in the Big Ten, you’re going up against the best teams and I think that just really prepares us for the tournament. Whatever’s thrown our way, we’re ready for it.”

“We’ve been doing this— thriving in tough situations and tough sets in the Big Ten— all season. That really prepared us for this moment now, and it really boosted our confidence going into it. We got the first-game jitters out of the way for the tournament. We have a lot of young players out there so it’s just good moving forward now.”

“I told the team after the match, I’ve learned in my experience that you shouldn’t talk much with your team after a loss. This is a different loss. We’re disappointed of course, but what we’ve accomplished this season, I’m so proud of and I’m so proud of who our student-athletes are as people. They’ve really come together and been amazing teammates so that’s something else I’m really proud of. I’m proud of who these ladies stand for and I told the seniors that they’re leaving a legacy. That was their goal at the beginning of the season and they’re definitely leaving a legacy with this program.

“Wisconsin’s blocking is by far the best block that we’ve seen this year. We even played Minnesota and I think Wisconsin’s block is much better than Minnesota’s block. It was challenging, we worked hard this week and put pressure on our players.”
-Green Bay head coach Abbey Sutherland

The Badgers face Pepperdine Friday in the second round of the NCAA Tournament in the UW Field House. First serve is set for 7 p.m. and tickets may be purchased at the gate.

MADISON, Wis. — The Green Bay volleyball team concluded a successful season this evening in the First Round of the NCAA Tournament against the #6 Wisconsin Badgers, falling in three sets despite a thrillingly tight second game. The Phoenix finish the season at 20-11, following their first-ever Horizon League regular season championship and first berth to the NCAA Tournament since 2003.

“You know it’s a successful season when a team has reached their potential and you don’t want it to end,” said head coach Abbey Sutherland. “We have done both. Our group has made this season an incredible journey of growth, grit, and positivity. We often say, “breathe, believe, and battle.” I am proud of our fight tonight against a top team in the country.”

Green Bay was neck-and-neck with Wisconsin in the first set (9-25), tying the game at four points apiece before the Badgers took 21 of the next 26 points. Instead of being discouraged, the Phoenix answered by opening the second set with a 5-0 run, forcing a Wisconsin timeout. The team continued to fight throughout the game, even out-blocking the towering Badgers four to three. Green Bay claimed set point twice before their opponents managed to pull off the win, 27-25.

Wisconsin pulled off a sizable lead early in the final set (15-25), with Green Bay never being able to come within five points of their in-state foes. The Badgers weren’t able to completely snuff out the Phoenix, however, as the teams traded nearly every point starting when Green Bay was behind 3-9 and ending when the Phoenix were down 11-16. A 4-0 run by Wisconsin sealed the outcome.

Freshman Alexandra Zakutney had quite the evening, tying her career-high kills for three sets with 13 and leading the team by far in the process. Senior Jessica Wolf added six kills of her own, as well as three blocks at the net. Also attributing to the team’s blocking total was sophomore Ashley Sledge, collecting four throughout the night by helping with nearly every stop.

The defense was all over the court, with three players making it into the double-digits for digs. Senior Austyn Everingham was a force during the first two set, scooping up 10 of her 11 total, while classmate Vanessa Buman held down the fort in the last set by picking up 11 of her 20. Sophomore Taylor Wolf was consistent in the back line during the entire match, also amassing 11 digs.

The program waves farewell to three standout seniors: Vanessa Buman, Austyn Everingham, and Jessica Wolf. As a class, the group won 75 matches, earning several league awards in the process. Those include Buman’s Defensive Player of the Year award, Everingham’s All-Academic Team honors, and Wolf’s All-Tournament Team recognition, all occuring during this season.

Buman collected an impressive 1,481 digs in her career, moving her into 5thfor all-time digs. Her average of 4.13 career digs per set also places her 4thin those standings, helped by her strong seasons as an upperclassman.

Everingham will cement her place in the record books by playing in 452 sets throughout her entire career, the fourth-most for a player in program history. She will also end as the number 7 player for all-time digs, finishing her career with 1,366 total.

“When the seniors set goals at the beginning of season, they said that they wanted to leave a legacy,” added Sutherland. “Austyn, Jessica, and Vanessa have left a special stamp on this program and we are so grateful for the heart, hard work, and dedication that they brought to our program.”