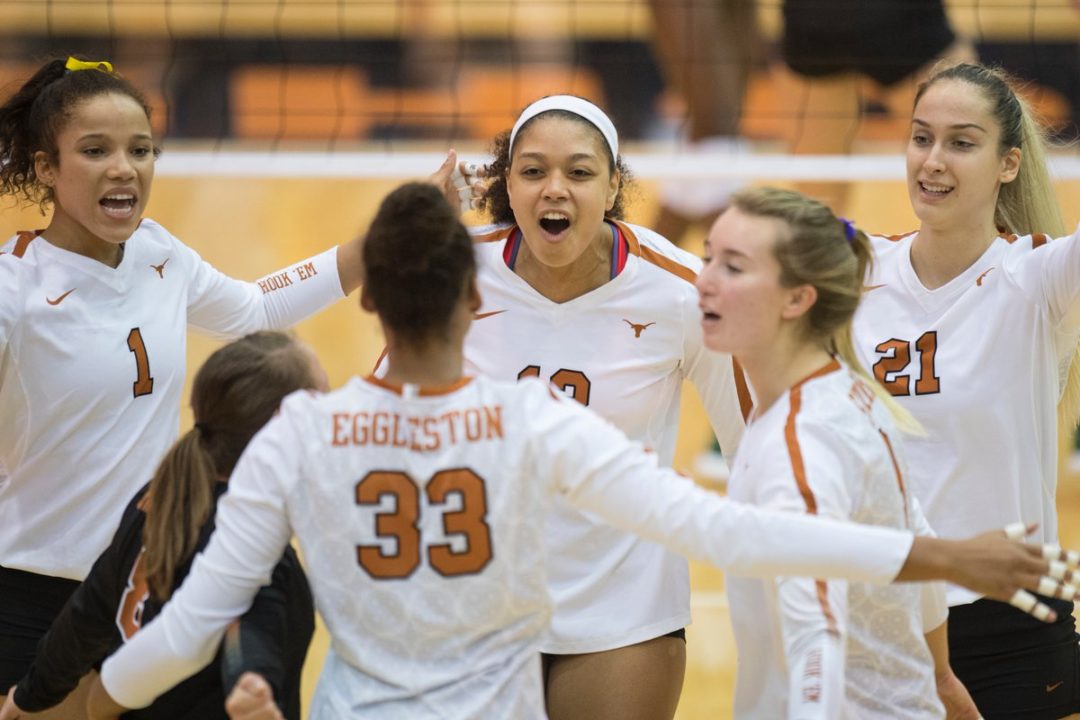 #6 Texas hit at a .333 clip and put up 12 blocks in a sweep of #18 Baylor on Wednesday, extending the Longhorns' win streak over the Bears in Austin to 43 matches and improving the all-time series record to 82-2. Current Photo via Texas Volleyball

#6 Texas hit at a .333 clip and put up 12 blocks in a sweep of #18 Baylor on Wednesday, extending the Longhorns’ win streak over the Bears in Austin to 43 matches and improving the all-time series record to 82-2.

Baylor piled up 16 kills and outhit Texas .250 to .185 in Set 1, but could not close out the victory. The Bears led by as many as four at 17-13 after kills by Philo and Shelly Fanning. The Longhorns scored five in a row to grab an 18-17 lead, including two kills and a block by Logan Eggleston. Baylor tied it up six times, last at 23-all, but a service error and hitting error gave Texas the 25-23 win. Pressley managed seven kills in the stanza.

The Longhorns hit at a .409 clip in Set 2, committing just two errors, while cruising to a 25-16 win. The teams grabbed a 9-4 advantage with help from four Baylor errors. Texas led by as many as six at 13-7, but the Bears cut the margin to three on three occasions. The Longhorns scored four in a row to push ahead 21-14 and held on from there, winning the stanza on a Pressley miscue at 25-16.

Texas kept up its hot hitting effort in Set 3, posting a .435 clip, while holding Baylor to a -.026 effort. The Bears committed 10 hitting errors in the set. Six miscues boosted the Longhorns to a 13-4 lead. Baylor would get no closer than seven the rest of the way. Kills by Butler and Eggleston pushed the margin to 10 at 22-12. Down 23-13, a kill by Philo and a Texas error gave the Bears two points in a row, but the Longhorns answered with kills by Katarina Luketic and Johnson to close out the night at 25-15.