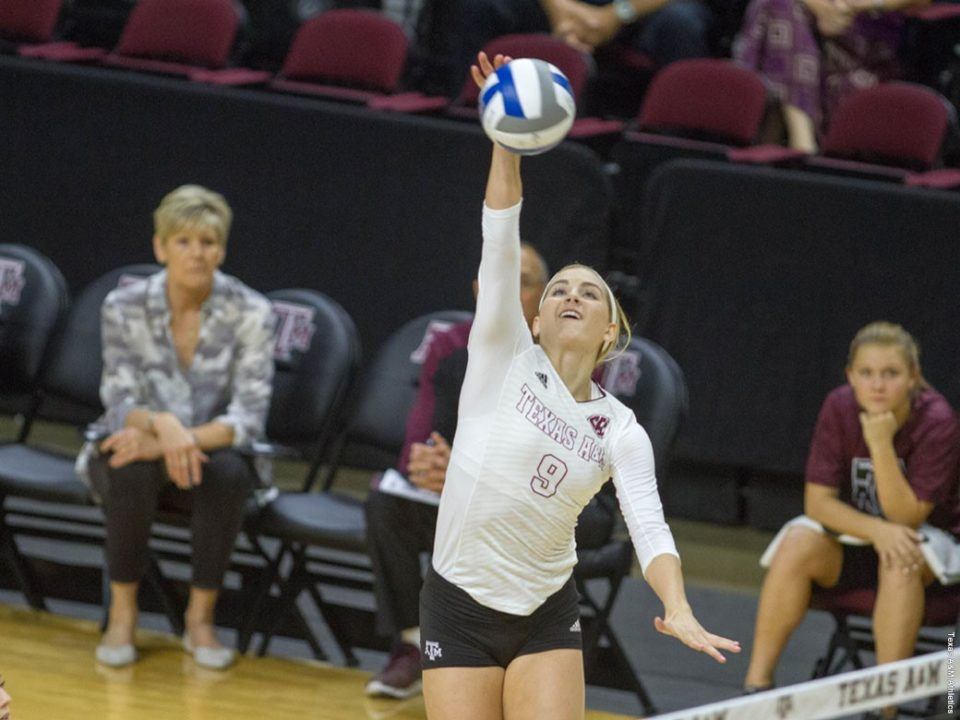 Texas A&M got revenge after an early season loss to Alabama, but Krystal Rivers for the Crimson Tide was the most impressive individual on the court. Current Photo via Texas A&M Athletics

The Texas A&M Aggies hosted the Alabama Crimson Tide at Reed Arena, and defeated the Tide in four sets. The Aggies were looking for redemption, after losing to Alabama in their season-opener. They have now won 9 out of their last 10 matches.

Defensively, Texas A&M was led by Kaitlyn Blake with 6 blocks, and Amy Nettles with 18 digs.

Although losing the match, Alabama had several individual stat leaders. Krystal Rivers continues to shine, notching 25 kills in the match against Texas A&M. Rivers also had 10 digs to give herself eight double-double so far this season.

Coming up, Texas A&M will host Tennessee on Sunday, November 6th, at 1:30 p.m., while Alabama will return home to face Arkansas on Sunday at 1 p.m.

Freshman outside hitter Hollann Hans had 16 kills, and junior outside hitter Kiara McGee added 14 as the Aggies won their fourth consecutive match and also picked up their ninth victory over their last 10 matches to improve to 15-7 overall and 9-2 in SEC matches.

Alabama, which upset A&M, 3-2, on Sept. 23 in Tuscaloosa, Alabama, suffered its fourth consecutive loss and dropped to 15-10 overall and 4-8 in conference play, as well as 0-5 all-time in matches played in College Station.

Junior libero Amy Nettles led the Aggies with 18 digs to reach 1,000 digs in her career, with the milestone 18th dig falling in for a kill. Senior defensive specialist Victoria Arenas, the reigning SEC player and defensive player of the week, added 13 digs, and Hans pitched in 10 to record her third double-double of the year.

Junior setter Stephanie Aiple also posted her third double-double of the season, tying her season high with 13 digs and also dishing out 45 assists, giving her 3,119 assists for her career and moving her into seventh place in the A&M career records.

Sophomore middle blocker Kaitlyn Blake, who leads the SEC in blocks per set, had a match-high six blocks to lead A&M to a 9-5 advantage in team blocks. Senior middle Jazzmin Babers added three blocks and moved into a tie for second place in the A&M all-time career records for block assists with 451, five shy of tying the record of 456 held by Cindy Lothspeich (1994-97).

Texas A&M spotted the Crimson Tide a 3-0 lead to start the match, and the Aggies continued to trail, 16-13, before a kill down the line by Hans marked the start of an 8-1 run to give A&M its first lead. The teams traded points before a kill by McGee, followed by an Alabama attack error put the Aggies at set point, 24-19. Alabama’s Krystal Rivers, the national leader in kills and points per set who also lit up the Aggies for 29 kills in the previous meeting, put down her fifth kill of the frame, but the Tide whiffed on its next attack attempt to close out the set.

Alabama, which was outhit, .146 to .053 in the opening set, outhit A&M, .256 to .065, in the second stanza and took advantage of the Aggies’ unforced errors to even the match. Blake and Babers had back-to-back kills to tie the score at 10-10 before Alabama went on a 5-0 run. Senior outside hitter Emily Hardesty ended the rally with consecutive kills to put A&M within 15-12, but it would be the closest the Aggies would get as the Tide kept a lead for the remainder of the set. Alabama later got back-to-back kills and an ace to take its largest lead at 23-16. Hans and Blake combined for a block to end the run, but the teams exchanged points for the remainder of the frame, with Alabama blocking an A&M attack to get the win heading into the intermission.

The Aggies let a 7-3 lead quickly evaporate in the third frame, but they later redeemed themselves in a huge way by fighting off five set points to win the crucial set. Alabama would use a 5-0 run to take its first lead, 13-11, and the Tide would continue to reel off series of points, taking advantage of two A&M miscues to build its largest lead at 21-15. Alabama maintained its six-point advantage and was serving for the set at 24-19 following Rivers’ eighth kill in the stanza when A&M stormed back. Hans got a kill through the block, and Alabama was whistled for a ball-handling error on the ensuing play. Rivers then committed two unforced errors, hitting into the net and hitting long to put A&M within 24-23 and forcing Alabama to call a timeout. Aggie opposite hitter Ashlie Reasor ricocheted a kill off the Alabama block coming out of the timeout as A&M fought off the fifth set point and tied the score at 24-all. The Tide, which was outhit, .293 to .239, then hit wide on the next play to give A&M its first lead since 11-10, and more importantly put the Aggies at set point. Rivers got a kill off the block to tie the score for the sixth time, but McGee powered down a cross-court kill to put the Aggies at set point for the second time. McGee then teamed with Babers to block Rivers for the set-clinching point.

A&M also let a 9-4 lead get away in the fourth set as Alabama went on a 7-1 run to take its first lead at 11-10. McGee got a kill off the block to end the rally, and Reasor followed with a kill to quickly return the lead to the Aggies. Alabama knotted the score at 12-12 before A&M erupted for eight unanswered points, including Nettles’ milestone dig that fell in for a kill to put the Aggies ahead, 20-12. A&M, which outhit Alabama, .469 to .235, took its biggest lead and was serving for the match at 24-16 following an Alabama attack error. Rivers kept the Tide alive, recording her match-leading 24th and 25th kills before Blake closed out the match with her ninth kill of the contest.

Texas A&M continues its four-match homestand against Tennessee on Sunday at 1:30 p.m. at Reed Arena. It will be “Superhero Day,” and fans are encouraged to come dressed as their favorite superhero for chances to win Aggie Superman shirts and gear. Fans also will have chances to win Aggie gear and more by playing volleyball bingo. Bingo cards will be available at the marketing kiosk on the concourse.

COLLEGE STATION, Texas. – Alabama volleyball fell in a tough-four set road match at Texas A&M Thursday night, as the Aggies used a late comeback in the third set to spur a decisive win in the fourth to take the match, 3-1.

Alabama (15-10, 4-8 SEC) dropped the opening set to Texas A&M (15-7, 9-2 SEC), 20-25, but rebounded with a big 25-18 win in the second to even it up at intermission. The Tide reached set point first in the third set but the Aggies made a huge late comeback to win, 25-27, and seal it with a 16-25 win in the fourth. Krystal Rivers led all players with 25 kills, putting her 71 shy of the Alabama career record. She added 10 digs for her eighth double-double, her fifth in the last seven matches, while fellow senior Brittany Thomas earned her fourth double-double with 12 kills and a team-leading 19 digs.

Alabama scored three-straight points to start the first set and held onto the lead for the first half, remaining up by three at the media timeout, 15-12. The Aggies fought back to tie the set out of the break with a 4-1 run, making it 16-16, and took the lead shortly thereafter at 18-17. Texas A&M scored two more points to make it 20-17 before Alabama took a timeout looking to halt the Aggies’ momentum, having scored four-straight points. The Aggies closed out the frame with a 5-3 run, winning 25-22.

The two teams were evenly matched to the 10-point mark until Alabama rattled off five-straight points, capped by a solo block from Texas native Abolanle Onipede, to lead 15-10 at the media timeout. With a five-point lead at 19-14, a kill by Hayley McSparin made it 20-14 as the Aggies took its first timeout. Up 21-16, a long back-and-forth ended with Leah Lawrence tipping a kill to the middle of the floor to make it 22-16 and Natalie Murison followed with an ace to make it 23-16 as Texas A&M took its final timeout. The Tide held on to win, 25-18, and even the match at 1-1.

Tied at 2-2 early in set three, Texas A&M used a 5-1 run to build a 7-3 lead but Alabama continued to chip away at the deficit, eventually tying it at 11-11 on a Thomas service ace and taking a 12-11 lead on a kill by Rivers. Texas A&M took its first timeout trailing 13-11 and Alabama continued to pull away with the Aggies taking its second timeout down 19-14. Texas A&M closed the gap to three points as Alabama was forced to take a timeout up 21-18 and, after reaching set point 24-19, the Tide had to burn its second timeout after four-straight points by the Aggies made it a one-point game, 24-23. Two more points swung set point in Texas A&M’s favor, 25-24, and the Aggies eventually completed the comeback with a 27-25 win in the third to take a 2-1 match lead.

Texas A&M carried its momentum into the fourth, building an early 5-1 lead as Alabama had to take an early timeout. The Tide chipped away at the deficit and eventually tied it up at 10-10 on a kill by Thomas and took the lead on the next point. Tied at 12-12, the Aggies scored four-straight points to make it 16-12 as the Tide took a timeout but the run continued after the break, eventually stretching to eight-straight points before a kill by Lawrence gave the Tide possession trailing 20-13. Texas A&M eventually reached set point with a double-digit lead, 24-14, and won the set, 25-16, to take a 3-1 match decision.