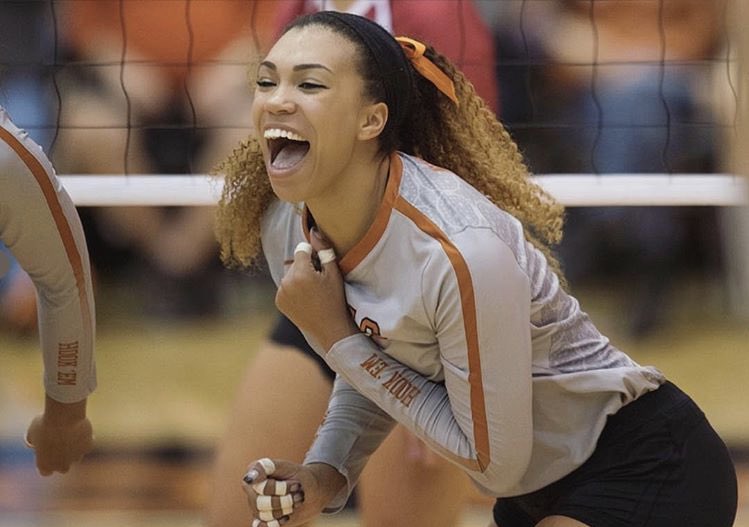 Former Texas and USC opposite and three-time All-American Ebony Nwanebu has signed a professional contract to play for Büyükçekmece in Istanbul, Turkey. Current Photo via Texas Athletics

Former Texas and USC opposite Ebony Nwanebu has signed a professional contract to play for Büyükçekmece in Istanbul, Turkey.

The three-time All-American shared that she was living her dream via twitter on Aug. 16.

I wish I could go back and tell 9 year old Ebony that all her dreams will come true.

Because your girlie is moving to Instanbul, Turkey next week to be a “professional volleyball star”.

“They say when you dream a thing more than once, it’s sure to come true.” https://t.co/G3NC8DAG4M

At USC, Nwanebu posted 3.47 kills and 0.82 blocks per set as a rookie en route to first team All-America, AVCA Pacific South Region Freshman of the Year and Pac-12 Freshman of the Year honors. In 2014, she played with the U.S. National Team at the Montreux Volley Masters Tournament in Switzerland, earning a silver medal. She went on to turn in 3.12 kills and 1.44 digs per set, while hitting .226 and adding 55 blocks and 17 aces.

Turning to her international career, Nwanebu’s new team, Buyukcekmece welcomed her and even shared her airport pickup on Facebook last week. “The new transfer of the Buyukcekmece Volleyball Academy, Ebony Nwanebu, arrived in Istanbul yesterday evening,” the team said in an Aug. 25 post. “The athlete from the University of Texas, was greeted by the club manager and the technical team.”

Nwanebu said hello to the team’s fans upon her arrival.

Nwanebu was among the alumni that returned to Gregory Gym for the Orange-White Scrimmage on Aug. 19 pitting past players against the current Longhorn team.