The Volleyball World Mourns The Death Of Italy’s Sara Anzanello 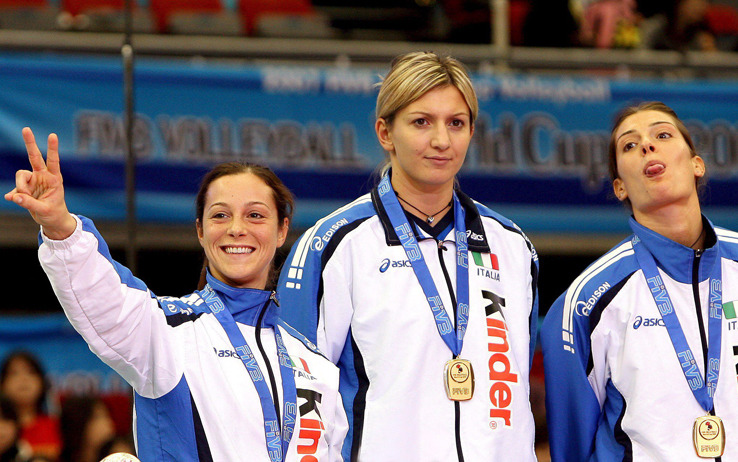 Sara Anzanello (centre) standing on the podium together with her friends and teammates Eleonora Lo Bianco (left) and Francesca Piccinini (right).  Current Photo via CEV

The Italian volleyball community was shocked this Thursday by the death of recently retired star middle blocker Sara Anzanello. The 2002 WCH gold medalist was only 38 years of age and had been battling cancer for the last few months. The news spoiled what was to be a great year’s end for Italian fans, fresh off celebrating their team’s WCH silver medal, an achievement which Sara herself proudly celebrated in her social media channels.

Sara was a known winner. Having debuted with the Italian national team at only 17 years age, she amassed 278 caps with the squad. In 2002, she helped Italy achieve its biggest accolade to date with the gold medal at FIVB’s Women’s volleyball World Championship tournament. She was also part of the dominating squads that won gold at the 2007 and 2011 World Cups, winning 21 out of the 22 matches in both tournaments. She was likewise a brave warrior outside of the court, retiring in 2013 after a having to get a liver transplant due to being infected with hepatitis, only to come back to the game 2 years later.

Bruno Cattaneo, president of the Italian Volleyball Federation, reacted to the news:

“It’s really shocking news. Sara was a very special girl who seemed to have managed to win her personal battles; but unfortunately things did not go as we all hoped. In addition to being an athlete of the highest level, she was an exceptional person. She was part of our family. On behalf of the whole Federation, I want to send a sincere embrace and a deep condolence to her family loved ones.”

Anzanello’s last post to her Facebook page before her death was an announcement that she had cancer of the lymphatic system and was going to begin chemotherapy.

“I am afraid because I want to live,” she said poignantly. “You never know what and how many challenges life puts before you, hardly enough is ready. What is the thing you want more than any other, your dream in the drawer, your biggest wish? My dream is to live. Simply living, walking, being outdoors, a nice bath in a clear sea, the sand under your feet, the white snow that surrounds me on a sunny winter day, my paintings, my kitchen, my small vegetable garden synergistic, an evening with my family and with the people I love. Living, without great pretensions, but living.”

Anzanello underwent a liver transplant in 2013 and briefly returned to play in Serie A in 2014. The tumor was found earlier this year when she was undergoing testing to get back on the list for a new liver transplant.

The Italian Volleyball Federation has stated that all Series A matches this Saturday and Sunday will obey a minute’s silence in memory of Sara.