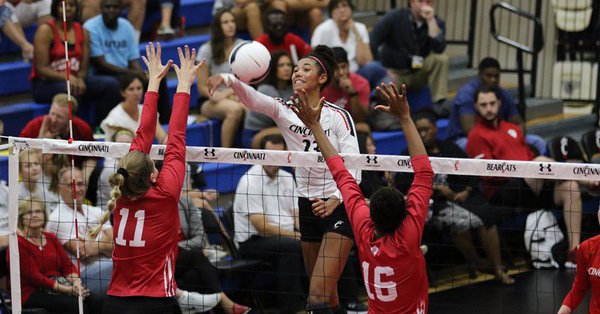 The American Athletic Conference has announced the winners of the league’s weekly volleyball honors for the week ending on October 14: Cincinnati's Jordan Thompson and UCF's Jordan Pingel.  Current Photo via Cincinnati Athletics

PROVIDENCE, R.I. – The American Athletic Conference has announced the winners of the league’s weekly volleyball honors for the week ending on October 14.

Thompson earns her fifth weekly accolade this season and ninth of her career after another historic weekend of play. Thompson set her fourth American record of the year, recording a stunning 44 kills in a five-set win over Wichita State on the way to leading her team to another weekend sweep. Thompson and her teammates handed the Shockers their first loss at the Charles Koch Arena in an American match. She became the first player in conference history to reach the 40-kills mark in a single match. Thompson averaged 7.89 kills, 8.39 points, 3.00 digs and 0.56 blocks per set with a .400 hitting percentage and five blocks. Thompson also led her team on Friday night with 27 kills and 18 digs in a four-set win over Tulsa as the Bearcats remain undefeated in conference play with a 7-0 record.

After averaging an astounding 7.89 kills per set in two big road matches, it's no surprise that Jordan Thompson claimed her fifth @American_VBall Offensive Player of the Week honor this season!#Bearcats | #momentum pic.twitter.com/C1iwjAPwRQ

Pingel played a pivotal role in helping her team hold foes to hitting below the .200 mark as UCF extended its winning streak to 13-straight matches. The Knights own a 7-0 conference record, as the program picked up its 1,000th win on Sunday, becoming just the 24th NCAA Division I team to reach that mark. Pingel averaged 6.25 digs per set, registering 25 digs in each of the Knights’ four-set victories. She collected her 2,000th career dig, to become the second player in American Athletic Conference history to reach that milestone.

A pair of 25-dig outings earns Jo her second straight honor from @American_VBall!

Melville was a key contributor in both the front and back rows, to help the Knights in extending their winning streak. The freshman outside hitter reached double-digit kills in both wins, averaging 4.12 kills and 2.75 digs per set with a double-double and five blocks. She had 16 kills and eight digs against Temple and 17 kills and 14 digs against UConn. Her 12 double-doubles this year lead The American.

Flowers averaged 19 kills per match (4.22 kills per set) and hit .281 through a 2-0 weekend—the Tigers’ first weekend sweep since November 2016. She posted double-doubles in both wins, tying career-highs with 20 kills and six blocks in a 3-2 victory over SMU on Sunday.

Payne had an efficient weekend at the net, hitting .393 and recording double-digit kills twice through a pair of five-set matches. She pummeled 13 kills on 27 swings with one error to hit .444 against UConn on Friday. She then knocked down 12 more kills and hit .345 with three stuffs in a 3-2 win over Temple on Sunday.

Hansel averaged 4.33 kills and 4.50 points per set in wins against SMU and Houston. The junior right side hitter earned a career-high 20 kills in the Green Wave’s win over the Mustangs while hitting .364 on Friday. Hansel also had a strong performance against the Cougars on Sunday, tallying 19 kills while hitting .318.

Brown was a force at the net against Cincinnati, recording a career-high 28 kills, while hitting .284 with 12 digs. She also had eight kills, 13 digs and two service aces in a sweep over ECU on Friday, averaging 4.50 kills, 5.12 points and 3.12 digs per set over the weekend.