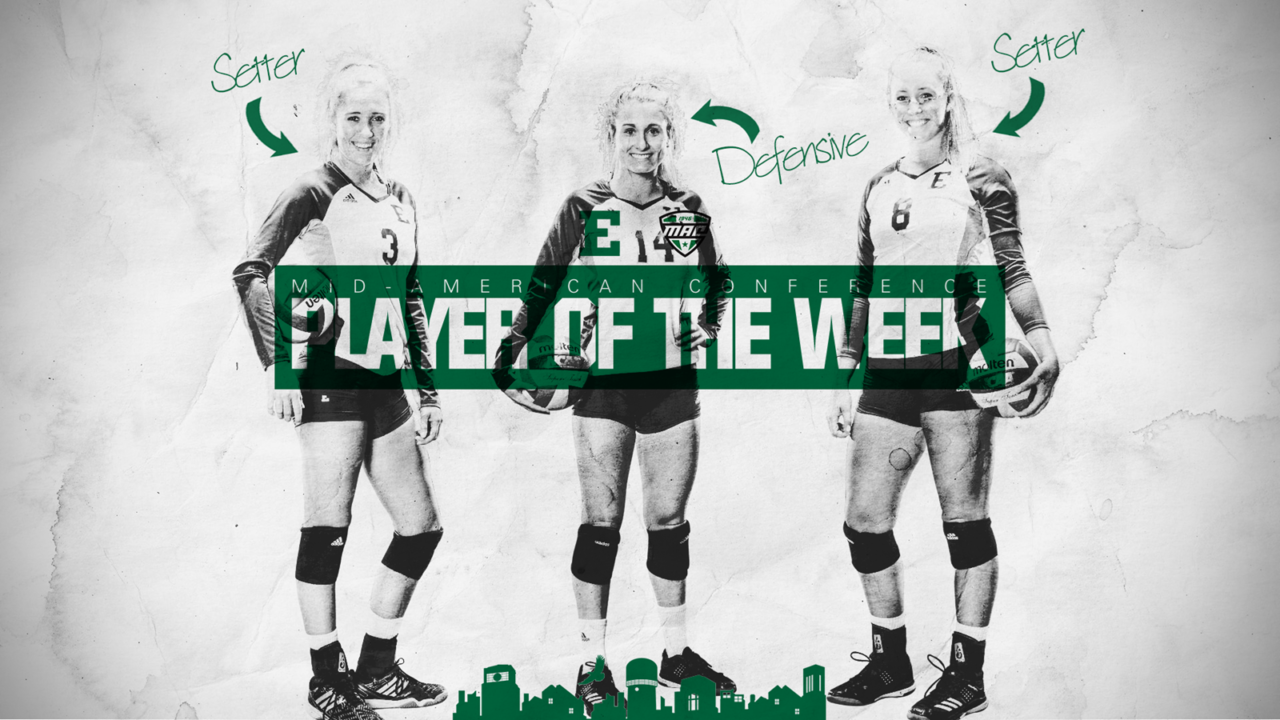 Corinne Jemison, Miami, Middle Hitter
Freshman – Kentwood, Michigan/East Kentwood
Jemison was a force in the middle in leading Miami to a 2-0 Mid-American Conference start on the road this past weekend. She finished with 17 kills, an average of 2.83 kills per set. She made only three attack errors in 27 attempts for an impressive hitting percentage of .519. That included a .562 attack percentage in the win over Buffalo Saturday. Jemison also scored for the block, assisting on four blocks over the weekend. She was responsible for 19.0 points in the six sets, an average of 3.17 points per set.

Congrats to @m_payne16 and Corinne Jemison for each being named MAC East Division Player of the Week!https://t.co/2SffNiyxrK#RiseUpRedHawks pic.twitter.com/QMrZ7OmZPC

Meg Wolowicz, NIU, Middle Blocker
Senior – Manitowoc, Wisconsin/Manitowoc Lincoln
Wolowicz led NIU to two victories this weekend against Toledo and Ball State… The senior averaged 4.71 kills per set and hit .300 for the weekend… She led all players with 16 kills in NIU’s sweep of Toledo, hitting .344 in the match… It was the fifth time this season Wolowicz hit over .300 in a match… Eight of her 16 kills Friday came in the third set… Wolowicz followed that up with 17 kills in a four-set win over Ball State Saturday night… Over her last seven matches, Wolowicz is hitting .266 and averaging 4.89 kills per set.

Wolowicz led NIU to a MAC opening weekend sweep. The senior averaged 4.71 kills per set and hit .300. Over her last seven matches, Wolowicz is hitting .266 and averaging 4.89 kills per set. #MACtion pic.twitter.com/uGsYgKoCWa

Margaret Payne, Miami, Middle Hitter
Junior – Bloomfield Hills, Michigan/Cranbrook Kingswood
The Miami volleyball team held its two opponents to a .090 attack percentage in two straight-set road wins to open MAC play last weekend. A big part of that was the play of junior middle hitter Margaret Payne up front. She finished with 16 blocks in six sets, an incredible 2.67 blocks per set average for the week. After recording five blocks in the win over Akron on Friday, Payne followed that up with a career-high 11 blocks (one solo and 10 assisted) on Saturday. She contributed offensively in the win over Buffalo as well with 13 kills and a .429 attack percentage. For the week, Payne scored 24.5 points (including 19.5 in just three sets versus the Bulls), an average of 4.08 points per set.

Alyssa LaFace, Eastern Michigan, Libero
Senior – Allen Park, Michigan/Allen Park
Senior Alyssa LaFace churned out an amazing two-game stretch in Eastern’s 2-0 opening to Mid-American Conference play. In the Eagles’ four-set victory at Central Michigan, the libero had 35 digs, and followed that performance with a 22 dig match in EMU’s sweep of Kent State. Her 35 digs is good for fourth in the modern-era record book for digs in a four-set match. She finished the week with an eye-popping 8.14 digs per set mark, had 57 total digs, and did not commit a reception error in 27 attempts.

Can we get a hoo-ha, two-times Monday???

Congrats @alyssa_laface3 , @MalloryRajewski and @rileytaylor98 for getting MAC West Player of the Week for the ✌️ time this season!!

Vera Giacomazzi, Ohio, Setter
Sophomore – San Vendemiano, Italy/Liceo Scientifico G. Marconi
Giacomazzi led Ohio (7-8, 2-0 MAC) with 84 assists (12.00 per set) to help the Bobcats open 2018 Mid-American Conference play with a pair of wins. She put together an impressive performance in a four-set victory over MAC East Division rival Kent State on Thursday (Sept. 20) at the Convocation Center, leading the match with 40 assists while adding eight digs and four total blocks (one solo, three assisted). Giacomazzi then led the match with 44 assists on Saturday (Sept. 22) in a road sweep of West Division foe Central Michigan. This weekend marked the first time this season Giacomazzi has totaled at least 20 assists in back-to-back matches.

Riley Taylor, Eastern Michigan, Setter (Junior – Indianapolis, Indiana/Perry Meridian)
Redshirt senior Mallory Rajewski and junior Riley Taylor executed the 6-2 to perfection to open Mid-American Conference play, averaging 13.14 assists per set in the Eagles two victories. The pair divvied out an outstanding 57 assists in a four-set win on the road at Central Michigan to kick off the weekend, and then put up 35 in a sweep of Kent State. The duo upped their combined season average to 11.82 assists per set, and also provide fantastic defense with a 4.89 digs per set average.