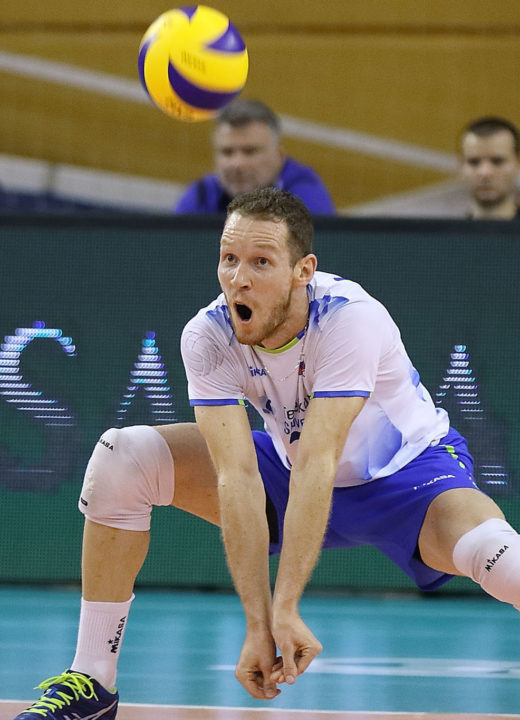 After a nice season with Trentino in the 2016/2017 season, which ultimately saw the team fall to Modena in the league’s semifinals, Slovenian star Tine Urnaut is changing sides and signing with PalaPanini’s squad, inking a two year deal with the club, per volleyball.it.

The 6’7″ 29 year old outside hitter is no stranger to the Italian fans, having played for teams such as Copra Piacenza, Umbria Volley, Volley Calippo, Trentino, and Top Volley Latina. As a member of the national Slovenian team, he was a gold medalist of the European League in 2015 (where he was the highest scorer) and a silver medalist of the European Championship of the same year (where he received the best outside spiker individual award, together with Earvin N’Gapeth).

Being one of Europe’s finest hitters, he will compliment Bruno Rezende, who also recently signed with the team; Earvin N’Gapeth, who is signed through 2020; and American Max Holt, who is also signed through 2020, very nicely, making Modena a true powerhouse and front-runner for Champions League gold. Here is how he reacted to the deal:

“I am happy, very happy to be in Modena. We agreed very fast, we all know that this is the most prestigious team in Italy and Europe, a top level club that aims to win all. It will be great to play with great teammates and a coach like Stoytchev, who had already wanted me in Trento and now in Modena. I can not wait to start the season. Every time I played at the PalaPanini I was impressed by the warmth of the audience, a warm environment that really pushes you, which makes life difficult for opponents. Playing with Bruno and  Ngapeth? They are among the strongest players in the world in their role and I can only be proud to be part of a team that will fight to win, always. “

Here is his new team reciprocating his fondness, wishing him a happy birthday (September 3):