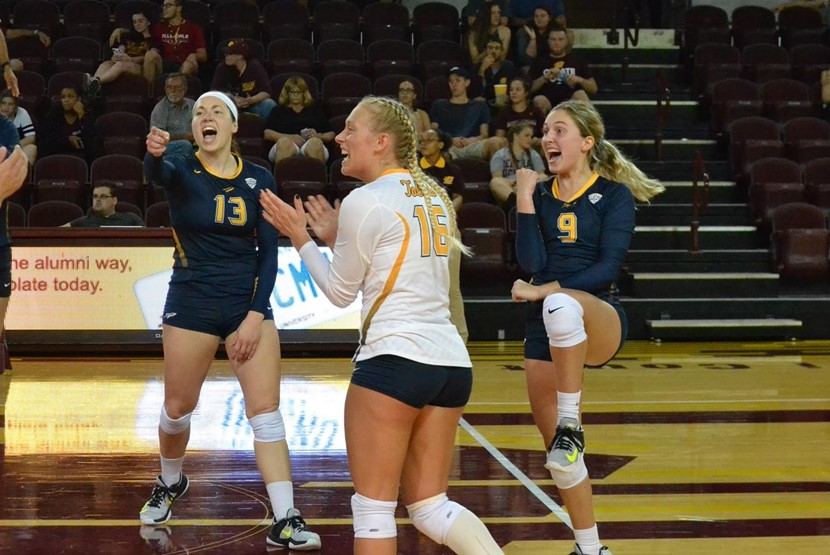 The Toledo volleyball team won for the fifth time in its last six matches, beating Kent State on Saturday night 3-0 (25-23, 25-22, 25-15). The Rockets are now 10-10 on the year and 5-3 in Mid-American Conference play. With losses by Ball State and Western Michigan on Saturday, UT sits in a three-way tie atop the West division in the MAC.

With the victory over the Golden Flashes, head coach Greg Smith notched the 100th win of his career. He is the fastest coach in school history to reach 100 victories with the program.

The Rockets return home next weekend to battle two of the top teams in the East: Miami and Bowling Green. Toledo hosts the RedHawks on Friday, Oct. 20 at 7:00 p.m. and the rival Falcons come to Savage Arena on Saturday, Oct. 21 at 5:30 p.m.

First Set: Toledo took an early 8-4 lead and looked to be in control, but the Golden Flashes came back to go ahead 13-11. The Kent State lead grew to five, 20-15, and looked to be enough to win the first set. The Rockets, though, stormed back and scored 10 of the next 13 points, including seven straight to take a 22-20 lead. Thomas and Beasley accounted for the final two kills of the first set for Toledo and helped make the final score 25-23.

Second Set: The second set followed a similar blueprint that the first set did. Kent State grabbed the lead early; a 4-1 advantage quickly grew to 10-6. Toledo got all of those points back to tie the score at 14-14, but the Golden Flashes once again distanced themselves from the Rockets, taking a late 21-17 lead. Kent State put itself in a great position to tie the match at 1-1, but Toledo again made a tremendous comeback. Down four with their backs against the wall, the Midnight Blue and Gold rattled off six straight points to take a 23-21 lead and completely flip the script on the Golden Flashes. Three of the final four points were scored by Toledo in a set it would win 25-22.

Third Set: There was no grand comeback by the Rockets in the third set because they didn’t need one. They led early on in the final frame and, even though Kent State held a lead for a short time at 12-11 and 13-12, Toledo went on a 13-2 run to end the both the set and the match, securing a three-set sweep with a 25-15 win in the third set. Townsend and Swope both tallied three terminations each in that dominant run to end the match.