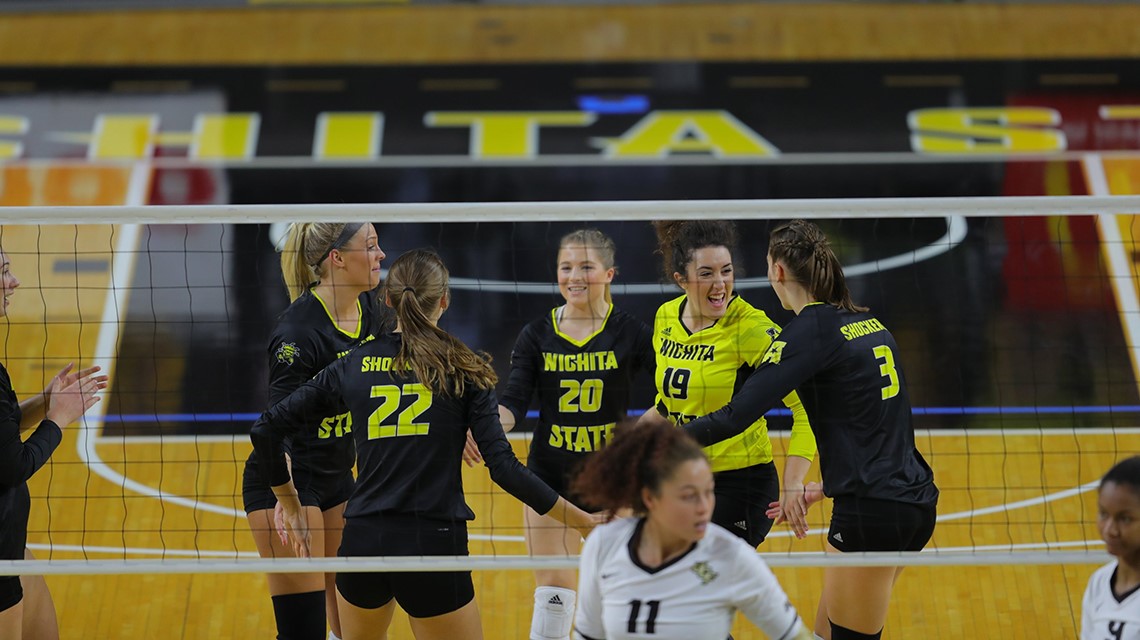 Before an energetic home crowd of 3,687, the #25 Wichita State Shockers defeated the SMU Mustangs in four sets to stand alone atop the American Athletic Conference standings.

In the first set, the Shockers led 14-8 early, but the Mustangs fought back and scored seven of the last 10 points to steal the frame 25-23. The second set ended with Wichita State turning the tables by scoring the six final points and winning 25-18.

The third was all Wichita State with Lehman notching five kills en route to an easy 25-12 victory. In the fourth, Lehman added another six kills and Civita registered nine of her 29 digs to help the Shockers seal the victory by the same 25-12 score.

Wichita State plays again on Sunday when they welcome Tulsa to Charles Koch Arena, while SMU remains on the road, traveling to Tulsa for a match against the Hurricane, also on Sunday.

Lehman hit .576 in the match and also added two digs and three blocks. Tabitha Brown had 13 kills, while Emily Hiebert had 44 assists and 12 digs. Giorgia Civita led the Shockers with 29 digs.

NEXT MATCH:
• The Shockers are next in action on Sun., Oct. 15 when they host Tulsa at 1 p.m. inside Charles Koch Arena for Havoc in the Heartland

WICHITA, Kan. (SMU) – The SMU volleyball team suffered its first American Athletic Conference loss Friday night, losing 3-1 at No. 22 Wichita State in the Charles Koch Arena in Wichita, Kansas. It was just the fourth meeting between the two programs, and the first as a conference match.

Lauren Mills recorded her league-best 12th double-double with 10 kills and 14 digs, and freshman Lexi Nordmann recorded seven blocks to lead the Mustangs. Wichita State hit .275 with 56 kills to improve to 7-0 in The American and 15-3 overall.

The Shockers won the last three sets, ending the match with a 25-12 victory in the fourth. SMU committed 33 attack errors, including nine blocks by Wichita State. The Shockers finished with 90 digs as a team, while SMU recorded 70.

Wichita State scored six straight at the end of the second set, taking advantage of four SMU attack errors, to win 25-18 and tie the match at one set apiece. The Shockers again built an early lead, scoring four of the first five points, and again held a sizeable advantage late in the set, 17-12. SMU again battled back, scoring five straight with three kills, a block and an ace, tying the score at 17-17. This time, however, the Mustangs were unable to capture the lead, posting just one more block before the fateful Wichita State rally.

The Shockers hit .500 in the third set with 19 kills en route to a 25-12 win for a 2-1 lead in the match. After posting three blocks each in the first two sets, SMU managed just one in the third. The Mustangs were held to just 10 kills on the offensive side, with three scored by Brunstein.