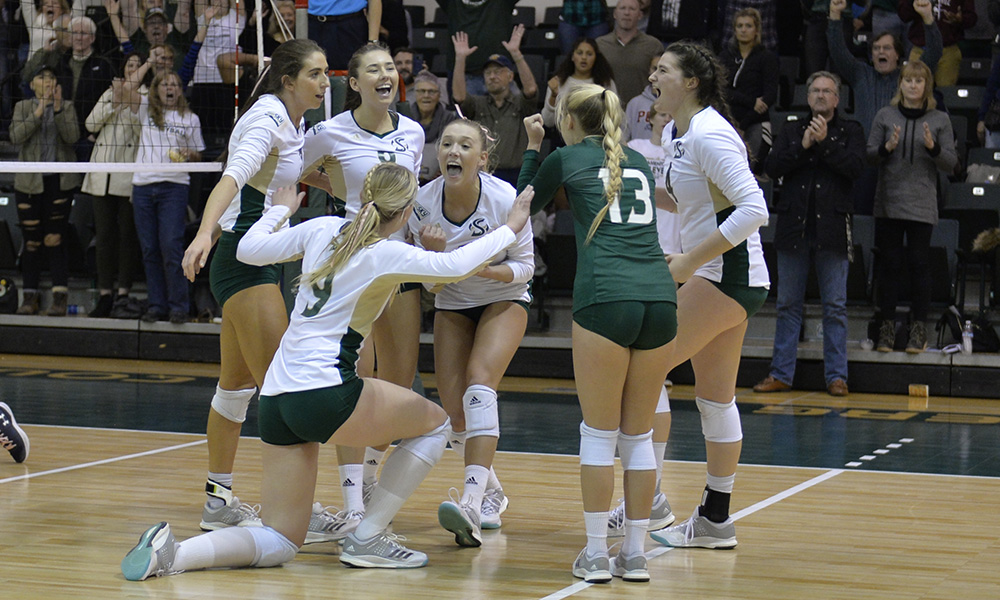 Regular season champion Sacramento State, No. 2 seed North Dakota, No. 3 Idaho and No. 4 Portland State are all on to Friday's Big Sky Tournament semifinals. Current Photo via Sacramento State

The top four seeds all moved on Thursday in Day 1 action at the Big Sky Championships. Regular season champion Sacramento State, No. 2 seed North Dakota, No. 3 Idaho and No. 4 Portland State are all on to Friday’s semifinals.

It Was Over When: In a final set that featured 18 ties, the match came down to the wire. It took five set-point tries for the Fighting Hawks to finally clinch the win. A stuff by Dooley and Griffin gave UND its first try at 24-23. Dooley and Julia Kaczorowska added kills and another Dooley stuff made it 27-26. Hale registered one final kill to knot it at 27, before a Tamara Merseli kill and a block by Vail and Griffin sealed the victory.

It Was Over When: Idaho State did not go quietly in Set 3, taking a late 20-17 lead with an midset run. Hirst notched three straight kills and the Vandals helped with a service error to make it 20-17. Idaho responded with an 8-3 run of its own to close out the set. After a tie at 22, Idaho scored three of the final four, two on Sharp kills and one by Carman.

Key Stats: Northern Arizona served up 13 aces, including eight in a 25-13 opening set win. Portland State won the remained of the statistical categories, 56-41 in kills, .237 to .172 in hitting efficiency and 10-7 in blocks.

It Was Over When: Although Portland State jumped out to an 8-1 lead to start Set 4, the stanza was far from over. NAU rallied to take the lead at 19-18. An ace and a block by Parker Webb led a 4-0 Viking rally to make it 22-19, but again the Lumberjacks surged to tie it at 22 and 23 and hold off a match-point try at 24-23. Heaven Harris kept NAU in the game with a kill, but Bettenay and Sych came through with the final two putaways for PSU.

Next Up: Portland State moves on to face No. 1 seed Sacramento State at 10:05 p.m. ET Friday in the second semifinal match.

Key Players: Senior outside Shannon Boyle notched a match-high 16 kills and added 15 digs and an ace to lead the way for Sac State. Junior outside Mikaela Nocetti followed with 14 kills, nine digs and three blocks. Junior middle Lana Brown led the team at the net with four stuffs, while junior libero Skyler Takeda paced a group of four double-digit diggers with 16. Junior middle Brie Gathright served up four of the team’s 11 aces.

It Was Over When: UNC grabbed a 23-18 lead in Set 4 after a 9-2 run, including seven straight points to start. Kloehn notched two kills and a block and three others turned in kills to put the Bears up five. Sac State countered with a 6-0 run of its own, including three UNC miscues, which made it 24-23 Hornets. Northern Colorado had the first set point try at 25-24. A Boyle kill thwarted that, then an ace by Kennedy Kurtz and a Bear hitting miscue stole away the win and the match.

Next Up: Sacramento State moves on to play Portland State at 10:05 p.m. ET Friday in the second semifinal match.