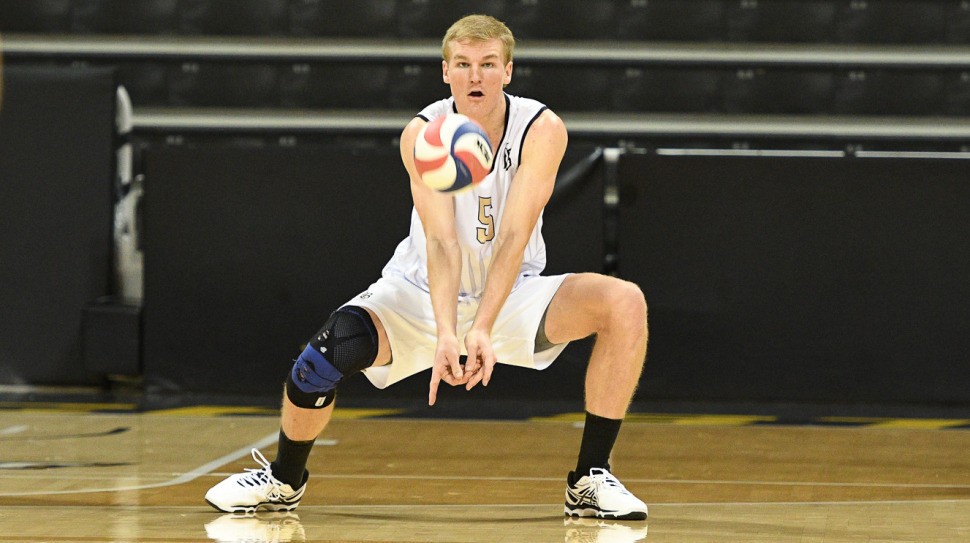 #1 LBSU made quick work of #14 USC in a sweep Saturday night. The 49ers 9-0 start is their best in 10 years. Current Photo via Long Beach State Athletics

The Beach were led by Kyle Ensing with 13 kills, hitting .435 on the night. He also added 7 digs, 2 blocks and 2 aces. In LBSU’s 9 matches this season, Ensing has led in kills in 7 of them. He was joined in double digits by senior outside hitter Bjarne Huus, who pounded 10 kills and leading all attackers hitting at a .571 clip. His career-high 4 aces provided half of all of the offense from behind the service line for the 49ers. Junior setter Josh Tuaniga ran the offense to efficiency (.425) by dishing out 36 assists. He narrowly missed a double-double with 9 digs. Tuaniga also added 2 blocks and 2 kills. Libero Jordan Molina added a career-high of his own; he led all floor defenders with 12 digs against the Trojans.

USC was led by outside hitter Gianluca Grasso with 11 kills. Jack Wyett and Ryan Moss both contributed 8 kills each, with Wyett adding 8 digs to lead the Trojans. Setter Chris Hall ran the offense by garnering 28 assists.

The Beach were solid offensively as they hit .425 (42-8-80) in the contest as Ensing led the team with 13 kills on .435 hitting (13-3-23). Ensing has now led Long Beach State in kills in seven of nine matches. Joining Ensing in double-figures was senior outside hitter Bjarne Huus who recorded 10 kills in the contest. Huus led the Beach with a .571 attack percentage, committing just two errors on 14 swings.

Junior setter Josh Tuaniga narrowly missed a double-double as he tallied 36 assists and nine digs on the night. He also added a pair of kills, and two blocks. Tuaniga has been a key component to Long Beach State’s success this season as he has paced the offense and done a solid job controlling the ball.

Defensively, libero Jordan Molina held down the back row with a career-high 12 digs. He also had help from TJ DeFalco who added eight digs, as well as Ensing who contributed seven.

At the net, freshman middle blocker Simon Anderson put up four block assists to lead the team. He also had a solid game offensively, knocking down six kills on 13 attempts with just one error for a .385 clip. The all-around performance by the Beach stymied USC (3-5) which was limited to just .180 hitting (35-17-100). The Trojans were unable to figure out Long Beach State as they committed 17 attack errors, seven service errors, and mustered just two block assists.

USC’s best performance of the night came in the first set when the Trojans started out with a 5-3 lead. Despite Long Beach State evening the score (6-6) with a Huus ace, USC managed to take back the lead as it went up 15-11. Down by four, Long Beach State used a 4-0 run, highlighted by another Huus ace, to tie the game back up (15-15). From there, the Beach jumped out in front 19-17 on back-to-back kills from Nick Amado and DeFalco, before Huus took it to set point with his third ace of the set. Lastly, Ensing put the game away with a kill to give Long Beach State a 25-22 victory.

Once again, USC took an early lead in the second set but Long Beach State was unfazed. The Beach quickly turned the two-point (4-2) deficit into a three-point lead (8-5) forcing a USC timeout. LBSU went on a 7-0 run to jump out to a 10-5 advantage as Ensing knocked down an ace of his own. The Trojans chipped away at the Beach’s lead and cut it down to a one-point game (16-15) but could not regain the lead. Following the break in action, the Beach dominated as they closed out the second set on a 9-2 run to win 25-17.

The Beach hit .500 in the first and third sets and tallied a .312 attack percentage in the second, while never allowing the Trojans to hit higher than .290.

Huus finished the match with a career-high four service aces to contribute half of the Beach’s total aces in the match.

USC lost its fifth straight match to fall to 3-5 on the season, while Long Beach State of the Big West remained undefeated at 9-0.

Gianluca Grasso led the Trojans with 11 kills, while Jack Wyett and Ryan Moss each had 8 kills.