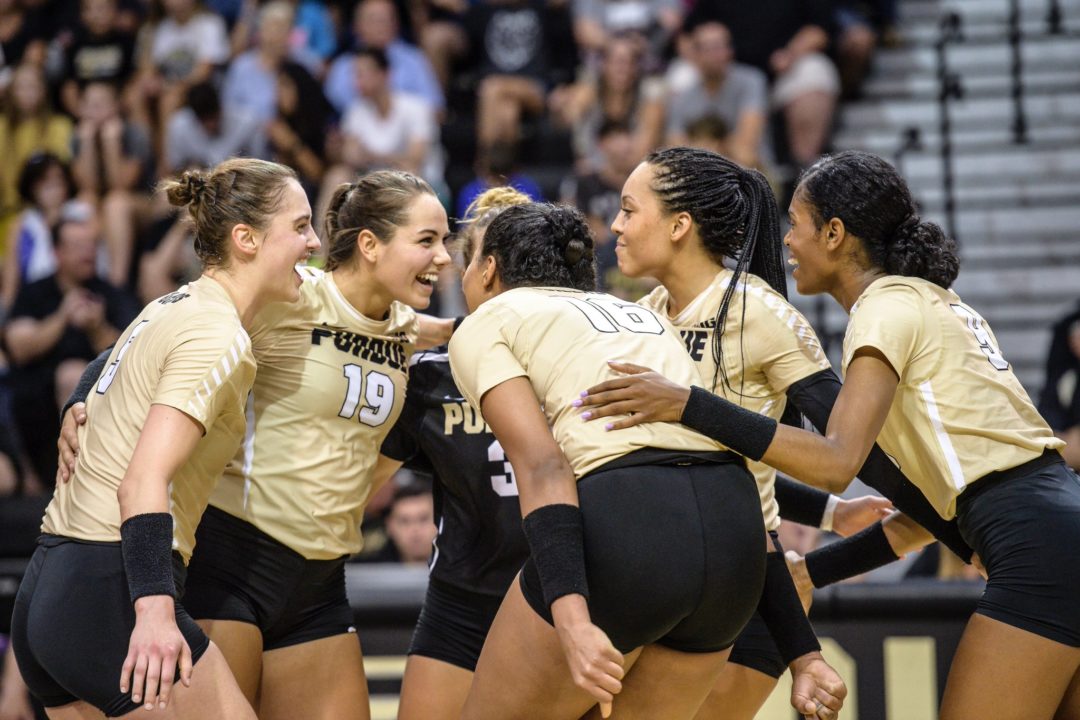 Purdue finishes the Kansas Invitational with a sweep of Belmont. Current Photo via Purdue Athletics

LAWRENCE, Kan. – After winning in four sets against #7 Creighton and losing in four sets to #9 Kansas, Purdue finally earned a sweep over Belmont in the very tough Kansas Invitational. Lost in the shuffle of the high level of play is that all three ranked teams went 2-1 on the weekend after #7 Creighton swept #9 Kansas Saturday night.

Belmont, hitting only .011 on the night. Arianna Person finished with 9 kills and 7 digs to lead Belmont.

The Boilermakers stepped up defensively against a complex offense as they out-blocked the Bruins 9.5-to-2 and held them to a .011 hitting percentage. Brooke Peters led the defensive effort with her fourth-straight 10-plus dig effort and her second-consecutive match without a service reception. She now has been aced just once in the last six contests in which she was served 87 times. Peters earned 11 digs to give her 42 on the weekend. Jena Otec and Carissa Damleradded seven and six digs respectively.

After two weekends of competition away from West Lafayette, the Boilermakers are set to come home to Holloway Gymnasium for matchups against Miami (Ohio) and Loyola (Chicago) on Sept. 15 and 17.

LAWRENCE, Kan. — Despite strong rallies in both the second and third sets, the Belmont University Volleyball team was unable to take a set away from its third consecutive ranked opponent at the Kansas Invitational.  The Bruins (5-6) fell to No. 17 Purdue (8-1), 3-0, on Saturday afternoon.

Kills by senior Arianna Person (Lenexa, Kan.) and graduate student Jessica Vestal (Concord, Calif.) hoped to set the tone for BU at the top of the first set but the Boilermakers quickly rolled off a 5-0 run, pushing the Bruin bench to call a timeout to regroup, trailing 14-5.  A short flurry of points thanks to Vestal, freshman Mackenzie LePage (Franklin, Tenn.), a service ace by junior Alexa Nichols (Walton, Ky.) and a PU error helped Belmont narrow the gap to seven, 15-8.  Purdue grabbed a double digit lead, 20-10, and did not look back en route to its 25-13 set victory.

The Bruins worked hard to open the second stanza, using a kill by freshman Akia Warrior (Fort Worth, Texas) to notch the first point of the set.  Belmont remained within striking distance until Purdue put distance between the teams, outpacing 7-2 to pull ahead, 12-8.  BU continued to show signs of life down the stretch, using kills from LePage and seniors Brie Lewis (Stilwell, Kan.) and Person to close the gap to five points, 19-14.  The Bruins would record three more points before the Boilermakers took the set, 25-17.

Belmont scored four unanswered points to take the lead early in the third frame, 5-3.  The Bruins expanded their lead to 7-4 using dual blocks by Nichols and Vestal with a service ace by junior Haley Sullivan (Lemont, Ill.).   After an 11-11 stalemate, the teams remained separated by two points through the midpoint of the set.  Suddenly, Purdue surged ahead, capitalizing on late Bruin attack errors, grabbing a 20-15 lead.  Unfortunately, BU was unable to move closer down the stretch and fell, 25-19, in its strongest showing over the three sets.

Person led the team with nine kills.  Warrior contributed 23 assists and a solo block.  Person and Sullivan both recorded seven digs to lead the Bruins.

Belmont returns to action on Friday, September 22 in the friendly confines of the Curb Event Center.  The Bruins open OVC play, hosting Morehead State, beginning at 6 p.m.  The match can be seen live on the OVC Digital Network and live stats will be available.  Fans may also follow the team’s Twitter account (@BelmontVB) for live, in-game updates.