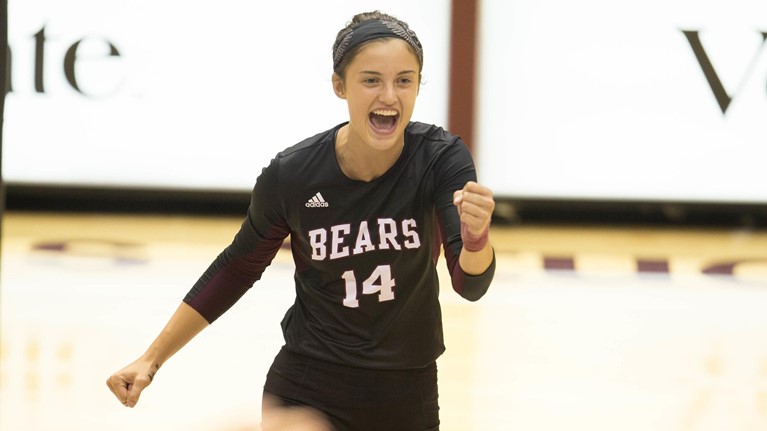 MALIBU, Calif. – 23rd ranked Missouri State righted the ship after a four-set loss to eighth ranked Washington earlier in the day with a sweep of Wyoming in their second match of the Pepperdine Asics Classic.

Missouri State pounded out 10 aces, a season high, against the Cowgirls. The Bears also continued to prove their grind-it-out defensive attitude by limiting Wyoming to hitting just .105 and only 29 kills.

On the Missouri State offense, Lauren Boone led all attackers with 10 kills, while Lynsey Wright and Lily Johnson had 8 kills each. Setter Daniele Messa ran the offense with 25 assists and added 13 digs to record a double-double. Emily Butters followed up a career high against Washington by leading the Bears again in digs with 16.

For the Cowgirls, Emily Lewis had 8 kills. The Wyoming offense was led by Marissa Harmon with 15 assists. Defensively, Madi Fields led all defenders with 17 digs.

MALIBU, Calif. — Missouri State picked up a sweep of Wyoming Friday evening after falling to eighth-ranked Washington in four sets in the morning contest on the first day of the Pepperdine Asics Classic at Firestone Fieldhouse.

The volleyball Bears moved to 5-3 on the season, continuing their success against a difficult early-season schedule. Missouri State finishes its season-opening nine-match road swing Saturday at 6:30 p.m. against Pepperdine (5-2).

Wyoming Recap (MSU won 25-21, 25-12, 25-18)
Missouri State served a season-high 10 aces and limited Wyoming (3-5) to a .105 attack efficiency in a sweep of the Cowgirls. The Bears were plus-15 at the service line in the match with aces and errors for both teams factored in, adding nine blocks and 54 digs in the contest.

Senior Lauren Boone swatted a season-high 10 kills and hit .500, Butters had 16 digs, and Daniele Messa had a double-double with 25 assists and 13 digs to go with four aces and three blocks.

The Bears served three aces in an 11-3 run midway through the first set for a 19-12 lead, only to see Wyoming block three attacks during a four-point span to pull even a 21-21. Wright answered with a kill and a block, Gerri Idos served MSU’s fourth ace of the set, and Messa’s solo block capped a 4-0 run to win the set.

Wright had three kills and two blocks by the time the Bears led 11-6 in the second set, and Boone and MacKenzie Irwin paired up for consecutive blocks during a 6-0 run for a 19-9 lead as MSU cruised to the double-digit win by limiting Wyoming to six kills against eight errors.

Missouri State raced to an 8-1 lead in the third set, but Wyoming challenged midway through the period by closing to 14-11. MSU picked up the next two points at the service line with a Cowgirl error and Messa ace, and led by four-plus points from there. Boone and Villarreal each had two kills in a 6-0 run to 23-13, and Wyoming fought off four match points before missing a serve to give MSU the win.

MALIBU, Calif. – Wyoming looked to get back on track against Missouri State on Friday night. The Bears used ten service aces compared to UW’s two to take the 3-0 win. MSU also used Wyoming’s eight service errors to run away with the victory.

Lewis led all Cowgirls with eight kills during UW’s second match of the day. McArdle recorded six, with Traphagan adding five against the Bears. McBride topped four kills with a team-high five blocks to conclude her Friday. Harmon recorded 15 assists with redshirt sophomore Cori Aafedt adding a season-best seven. Fields once again led UW in digs with 17, and also recorded three assists during the match.

Set One:
The Bears were able to jump out to a 5-1 lead but the Cowgirls never shied away. UW tied the score at eight and a kill from McBride then gave the Brown and Gold it first lead of the match. MSU used a 7-3 run to which Wyoming shortly after used its second timeout. The Cowgirls went on a 5-1 run to tie the score at 21, but MSU scored the last four points to win the set, 25-21. Fields had nine digs, while Traphagan and Lewis had four and three fills, respectively.

Set Two:
Missouri State and Wyoming’s offense both came out feisty early in the second set. Seven of the first ten points came from kills. Wyoming took its first timeout with the Bears up, 10-6. At that point, the set was back and forth until a 6-0 run from MSU to give it a 19-9 lead. Missouri State would go on to take the set, 25-12 and a 2-0 set lead. Lewis posted three kills for UW in the second set, as Fields led the team with six digs.

Set Three:
MSU’s aggressiveness helped trigger a 10-2 lead to begin the third and final set. The Bears first had set point up 24-14 before the Cowgirls went on a 4-0 run to force a MSU timeout. A service error gave Missouri State the final point and match. McArdle led the Brown and Gold with four kills in the third set.

Wyoming will close out the Pepperdine Asics Classic with a tough test in No. 8 Washington on Saturday. The match is set to begin at 3 p.m. MT.