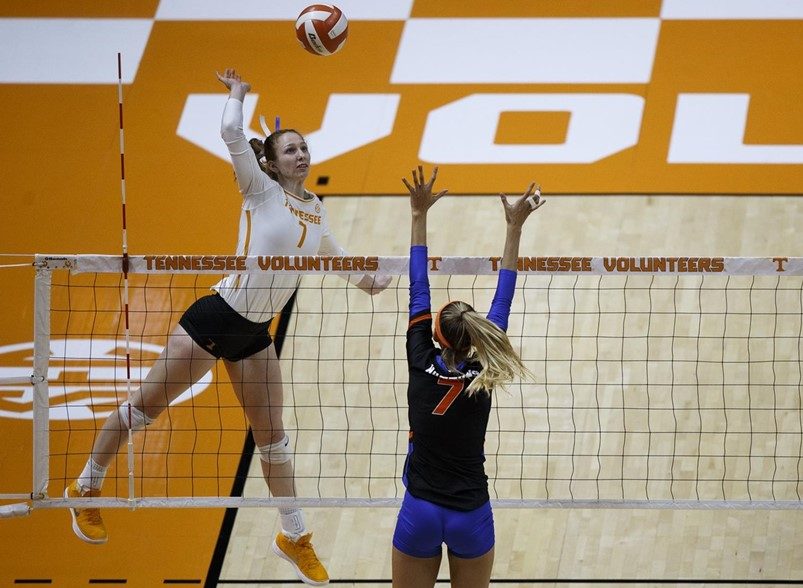 Texas A&M’s Hollann Hans averaged 6.62 points, 5.62 kills and 3.38 digs per set as the Aggies went 2-0 in the final week of the regular season. She posted back-to-back double-doubles to finish the season with a league-best 12 double-doubles in SEC matches.

Congratulations to Hollann Hans, who was named the SEC Offensive Player of the Week for the fourth time this season.🏐🏐🏐🏐https://t.co/q9iqMm1B7e#OwnIt #GigEm pic.twitter.com/tC6v53szAo

Tennessee’s Erica Treiber averaged 2.29 blocks per set as the Lady Vols posted two wins last week to finish 16-2 in the conference. She tallied five total blocks in the win over No. 13 Florida, and recorded her first double-double of 16 kills and 11 blocks against Ole Miss.

Georgia’s Meghan Donovan recorded 101 assists over two wins for the Bulldogs, good for an average of 14.43 assists per set. Her 60 assists against Mississippi State set the program record for assists in a four-set match in the rally scoring era.

For the fourth and final time in 2018, @meghan__donovan is the @SEC Setter of the Week!

Georgia’s Mallory Hernandez averaged 5.71 points and 5.43 kills per set and posted a .321 hitting percentage as the Bulldogs won their final two matches of the regular season.

Back-to-back 19-kill performances to end the season has earned @malhernan @SEC Freshman of the Week!