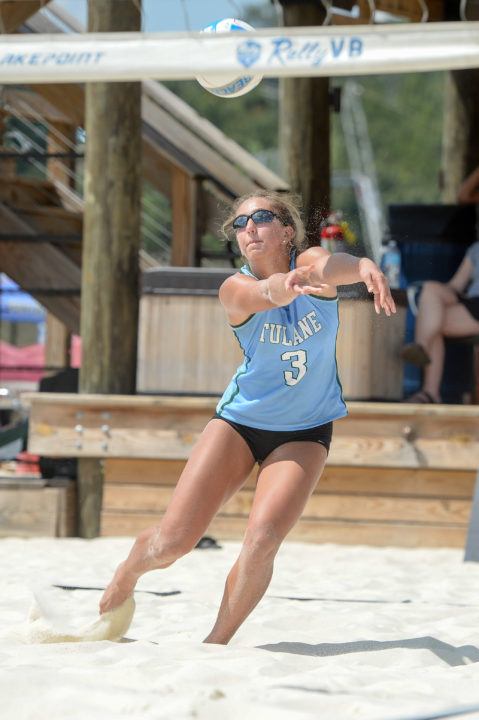 Tulane beach volleyball wrapped up the winningest season in program history on Saturday afternoon at the UNO Beach Courts, adding a pair of victories over Houston Baptist and UNO in windy weather conditions. With the wins, Tulane finished with a 24-13 record on the year and remained undefeated all-time against the Huskies and Privateers.

Following both duals, the Green Wave honored five graduating seniors for their contributions to the program over the last four years.

“We played very well today in unrelenting wind because we worked hard to control the first two contacts. As a team, we’ve come a long way with that this season. I’m proud of the players for working hard in the conditions and earning two more wins. It was also a privilege to see our five seniors compete a final time and win before we send them off to accomplish far more profoundly important goals in their chosen careers.”

The Green Wave completed the season sweep of the Huskies with a 4-1 decision to start things off from the Lakefront, with three of five courts being decided in straight sets.

Anna Chin and Sarah Strasner turned in the first Tulane results of the day, giving the Green Wave an early 1-0 lead in the dual on scores of 21-17, 21-18 from court four. Tulane’s No. 5 pair of Briana Correa and Hannah Holmes also sealed a match win after dropping a tight set two, 22-20, as the duo rebounded for a 15-11 final in the deciding set.

Up 2-0 on the Huskies, the Green Wave sealed their first win of the afternoon on court two, as Lan Nguyen and Annie Shurtz pulled off a close 21-19 victory before shutting the door on their competition in a 21-11 decision. Tarin Mergener and Madeline Mertz would post identical scores on court three to give Tulane a 4-0 lead with all eyes turned to court one.

Tulane’s court one pairing of Tea Juric and Kaylie McHugh played a hard-fought match with HBU’s Aeriel Horton and Jessica Wooten, coming just short of a set-one victory on a score of 21-19. Both pairs battled in the second set, with Juric and McHugh emerging victorious on a tight 25-23 decision to force a third outing.

Though Tulane’s No. 1 duo led for the majority of the set, the Huskies bounced back for a 16-14 win in the deciding set to take court one 2-1 as the Green Wave came away with a 4-1 victory in the dual.

In what would be the final match for five Green Wave athletes, Tulane posted its 15th sweep of the season in a 5-0 rout of the Privateers, the second victory over its crosstown rival this season.

Much like earlier in the afternoon, courts four and five started Tulane off in the win column, as Sarah Strasner closed out her collegiate career alongside Christina McAfee in the No. 5 position with a straight-set victory over the Privateers. Tulane’s court-four pairing posted a similar result, as Hannah Holmes’ final match in the Olive and Blue gave the Green Wave their second win of the day on scores of 21-19, 21-13.

On court three, Mertz and Mergener made quick work of the Privateers, recording their sixth win in seven matches as a pair. Tulane’s No. 3 duo defeated Brook Frank and Rachel Kuhn 21-15 in set one before holding the Privateers under ten points in the second for a final score of 21-8.

Shurtz and Nguyen also turned in a pair of wins from court two, sweeping the Privateers 21-13 and 21-17 for their third consecutive match victory as a pair.

Up 4-0 in the dual and going for a five-court sweep for the second time on the day, Juric and McHugh emerged victorious in their final match together, teaming up for a 21-14 set-one win over the Privateers. With both teams cheering from the sidelines, Tulane’s No. 1 pair completed the 5-0 sweep of UNO and closed out the 2017 season in winning fashion on a 21-17 set-two decision over Blessing Dunn and Cara Sander.

With a victory in the final match of her collegiate career, senior TeaJuric wrapped up her time in New Orleans with a record of 103-43 as the winningest player in Tulane beach volleyball history.

Results from the New Orleans Duals