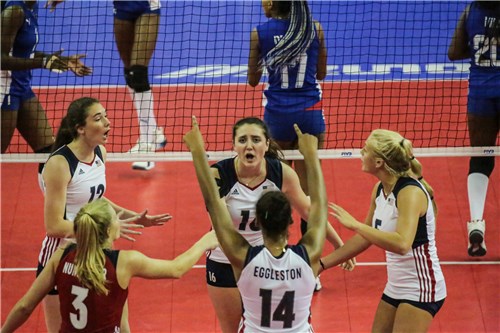 After working through higher ranked Puerto Rico and a five-set thriller with Cuba, the U.S. Women’s Junior National Team found things much easier against Guatemala. In a match that got progressively wider in terms of margin, USA saw a 14-2 edge in blocks, 6-0 in aces and almost tripled the amount of kills. Caitlin Baird (12 points) led the team in scoring for the first time in the event while no Guatemalan’s logged more than four points. Destiny Cox and Adeola Owokoniran also pitched in nine points each. Team USA will now move on to the semifinals.

USA head coach Keegan Cook: “I am satisfied with everyone’s performance; the result in the third set was especially good. All the different combinations and variety of players on the team gives us a chance to work on different possibilities if necessary for what’s coming ahead. Our overall performance has been awesome and our recovery after yesterday’s demanding match was really good.”

Guatemalan captain Carmen Elisa Gomez: “The preliminary round was a real challenge and we never gave up. We have a lot to learn from United States. We are ready to practice more and set for the next phase; we need to improve our serves and reception.”

To round out Pool A, Cuba edged out Puerto Rico to finish in second of the group. That means they will take on the third-place team from Pool B (Costa Rica) in the quarterfinals while Puerto Rico is pushed to having to take on the runner-up from the other pool (Mexico). The Puerto Ricans held the advantage in aces (10-4) and had two less team errors. Those extra errors came at a good price for Cuba though, who was the riskier side and brought more presence at the net in attacking (47-27 Cuba in kills) and blocking (13-9 Cuba in blocks). Ariana Pagan (10 points) led the way for a Puerto Rican side that had more scorers, but they couldn’t stop Ailama Cese Montalvo (19 points) and Yamisleydis Viltres Pacheco (15 points) for Cuba, contributing to their demise.

Cuba head coach Regla Torres: “It was a bad performance, we came out short, we were over confident. I thing they thought – United States is tougher so if we faced them head to head, this would be a walk in the park- they are wrong, there is no small opponent. They need to learn that we have the obligation to face everyone with the same game level. We will continue playing the same; we need to change in form, in character, in attitude, in motivation. They must be motivated to perform.”

Puerto Rico captain Paulina Pérez: “We had an excellent energy and attitude, we played well against Cuba, and we worked hard to win that third set. My team was confident, our serves were effective and we always scored when our passing was on the spot. I am very satisfied, despite the variations in our line-up.”

In a match where the loser would be capped to the fifth-eighth place losers bracket and the winner would finish third in the pool, Costa Rica earned a sweep of Honduras. That will send Costa Rica to the quarterfinals to take on the second place team in Pool A. They’ll hope for strong contributions in attack and serve again, but need to sure up a block that caused them an eight point deficit (4-12). Leading the way for Costa Rica was Edya Espinoza Rojas (17 points), who was one of two players on her side with double-figure points.

Costa Rica head coach Andrés López: “This was our first goal, advance into the next round winning only one game from the three in pool-play, so we reached our first objective, now we need to set new goals in the next round, it will be harder because our opponents are stronger and more demanding, but it is all a learning process. We are happy to have beaten our zonal opponent, it’s always good. We balance our offense between sever players; Honduras doesn’t, so our strategy was to control Nathaly Pérez. My team’s energy was low; they are tired from yesterday’s late match. Today we will study our next opponent to determine our plan.”

Honduras head coach Osiel Vásquez: “We were mentally prepared to beat Costa Rica, my girls new what to do and they didn’t execute. They did not follow our game plan, they do not respond. Our serves should have been stronger, my girls were supposed to attack Costa Rica’s short players, we didn’t do it.”

The defending champs had their most stern challenge to this point, as the host-nation played them very tight. While Dominican wins Pool B and get a bye to the semifinals, Mexico finishes second and seemingly validates how much of a threat they can be. In a match where the total points were 95-91, neither team had much of an advantage in one category or another, but there was a brilliant individual match between Uxue Amaya Guereca Parra (29 points) for Mexico and Natalia Martinez (23 points) for the D.R. The Dominican would get more from the supporting cast though, leading to the victory.

Dominican Republic head coach Wagner Pacheco: “It was a difficult match, it wasn’t easy facing Mexico. Uxue is an outstanding player, her strength is impressive, and she was difficult to stop. We had a slow beginning; it was hard to get into rhythm because of the rain delay which also affected the other team. Now we need to rest and practice tomorrow; we will probably face Cuba in semifinals, if so, it will be a great match.”

Mexico captain Uxue Guereca: “We feel good, we really put up a fight against Dominican Republic, and we are satisfied buy a little disappointed for our loss. We were hoping to win. For tomorrow’s match against Puerto Rico we feel optimistic and hope for the fans support. Mexico needs to be more consistent and we are motivated to reach the semifinals.”