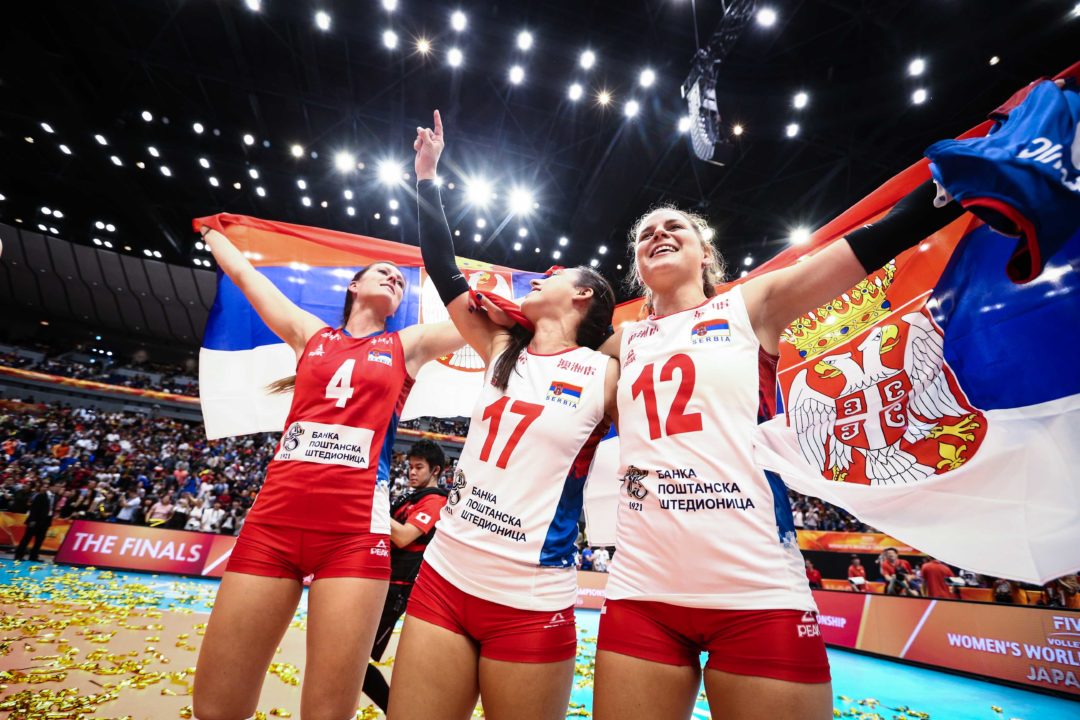 Serbia wasn't the only team to score a historic finish at the World Championships. Current Photo via FIVB

The story of their first World Championship title was well-told, but they weren’t the only country to hit a new high.

But they weren’t the only country to hit a new best position. Below, see the final ranking of teams at the 2018 World Championship, and after that, see a chart of each country’s history at the World Championships, and sine facts about how their 2018 performance stacks up historically.

Note that in prior years, many tournaments used ties to represent teams that were eliminated at the same level of the tournament. This year, they broke those ties by comparing records and results.

The Italian women have finished in the top 5 at the 2018 World Championships for 6 consecutive tournaments, but 2018 was just their 2nd medal (silver) after winning in 2002.

Aside from a few anomalies (1994, 2010), China has consistently been in the hunt for World Championship medals for almost 40 years. The bronze medal win over the Dutch marked their 6th medal-winning performance, which is the 3rd-most all-time behind Russia (13) and Japan (7). It broke a tie with the United States.

The Dutch women were the biggest upward-movers in this tournament. Their previous best finish was 7th place in 1998 in Japan, and their second-best previous finish was 8th place in 2006, also in Japan. By placing 4th this year, they become the 16th different nation to have a top-4 finish on their resumes.

By beating Japan for 5th place, the Americans earned a consolation prize after building high hopes by winning the Nations League tournament earlier this year. The Americans had never-before finished in exactly 5th place. It was also their lowest finish since 2006 (9th) after winning the title in 2004. Their finish tied Cuba (2002) and Russia (2014) as the lowest-ever finish by a defending champion.

The Brazilians never really looked right in this tournament, and wound up missing the Final 6 altogether. They haven’t been lower than 7th since 1982, where they finished 8th.

The most-decorated team (if we include the USSR years) in the history of the tournament, Russia, plagued by injury-after-injury, had their worst-ever finish this year: 8th. If 8th in the world is your country’s worst performance, and it took injuries to your 2 best players for that to happen, then that’s maybe some solace. Read more here.

The Dominican Republic’s 9th-place finish was their 2nd-best ever, though it was a drop from their watershed 5th-place result in 2014.

Turkey is a rising world power, but their 2018 result could viably be viewed as a setback. They played well all summer, including a silver medal at the Nations League, but things really fell apart at the World Championships. 10th matches 2006 as their lowest-ever finish in the 4 years that they’ve qualified.

Germany’s World Championship record is a bit complicated, but in total, while the 11th-place finish, that included a 3-2 upset of Brazil, felt like an outperformance, in historical context it was not a good result. They finished 7th in 2010 and 9th in 20214. 1998 was the last time they finished lower than 11th (13th).

Thailand was the team that almost became the tournament’s Cinderella. They wound up in just 13th place, tied for their best-ever finish, but with near-upsets over Russia and the US on their resume, in spite of having the worst injury run of any team in the tournament, they made their name.

Azerbaijan had their 2nd-straight World Championship 15th-place finish in the former Soviet republic’s 4th-ever World Championship appearance. Paulina Rahimova was the leading-scorer at the 2014 World Championships for as long as she participated, and was an early leader in 2018, though was eventually overtaken for that title. There just wasn’t enough around her to lift the Azerbaijanis any higher.

A 3-0 win over Argentina was enough to advance them to the 2nd round and improve upon the 21st-place performances in 2002, 2006, and 2014 (they didn’t qualify in 2010). They’re also the first team to ever lose to an African side (3-1 to Cameroon) at the women’s volleyball World Championship.

Canada has been eliminated in the 1st round of their last 6 World Championship appearances, dating back to 1986. While the ultimate rankings were different, they were effectively the same. Canada hasn’t won more than 1 match in a World Championship since 1990 (where they went 2-4).

Argentina has only once finished higher than 15th at the World Championships: in 1960. 2018 was their 6th appearance.

Cameroon beat Kenya to the title of ‘first African win’ by a few hours, but Kenya had the higher finish.

Cuba has won the World Championships 3 times (1978, 1994, 1998), but thanks largely to defections, the program is just a shell of that former team. Cuba went winless in the tournament.

Trinidad & Tobago won a historic set against Thailand in their historic first appearance at the World Championships, which was enough to put them slightly ahead of Kazahkstan. T&T’s coach left after the tournament for a developmental post with the FIVB.

Kazakhstan was better than their 0-5 finish (0-15 in sets) at the World Championships, but they seemed to really lack energy and enthusiasm for the task-at-hand.