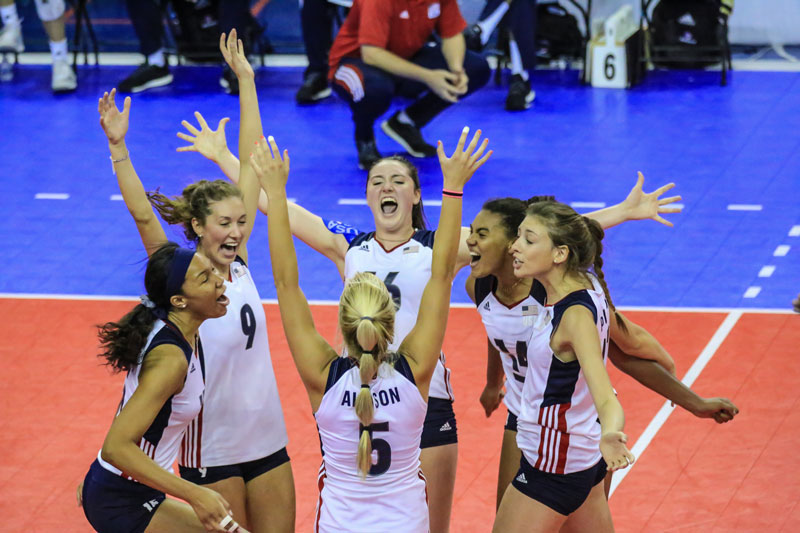 The United States Junior Women's National Team got by Mexico to set up a Gold Medal rematch with the Dominican Republic. Archive Photo via NORCECA

The defending champions in this event continue to roll, as they have now won 12 of 13 sets thus far in the competition. Their latest victim, Cuba, falls to the Bronze medal match against host Mexico while the Dominicans will face the United States for Gold. They were actually out-struck in kills (33-36), but they’ll mainly look to carry over their block (8-2) and serve (9-2 in aces) that paired with Natalia Martinez‘s (17 points) efforts were enough to earn a sweep over Ailama Cese Montalvo (13 points) and Cuba.

Dominican Republic head coach Wagner Pacheco: “These are two good teams; we respect each other very much. This is so far our best performance in the tournament, my girls were focused; they battled well, and counterattacked well too. Our serves helped and our defense was sharp. For me, our concentration and high spirit were essential in today’s victory.”

Cuba head coach Regla Torres: “They couldn’t execute our tactic plan. My players are still too anxious. The lack of practice matches and preparation is obvious. Added to the fact that Dominicans are the world sub champions and play at a higher level; I am not content. We must fight strong tomorrow, our next opponent won’t hand out anything.”

Things were extremely tight through three, especially in the middle games, but all of the sudden the United States Women’s Junior National Team erupted for a 25-9 set victory over Mexico to finish off the home team. They will hope that sends them to the Gold medal match against the Dominicans with momentum, while Mexico will try for a medal in the third place match against Cuba. Not only did Team USA notch more kills (48-36) and blocks (13-8) in the match, but the serve (12-3 in aces) was excellent. Uxue Amaya Guereca Parra (22 points) for Mexico along with Skylar Fields (21 points) and Logan Eggleston (15 points) also put up wonderful individual bouts for the match.

USA head coach Keegan Cook: “My team was outstanding in the comeback in set two. If you don’t follow principles as a team, which you agree on, whether you’re on or off the court, the game gets really hard; when you follow principles you can have a set like the fourth set. Dominican Republic is the most experienced team here, they’ve been in finals and they manage good sets, they are really good in tipping the ball; we’re excited to be in the finals, we expect clean volleyball.”

Mexico Libero Jocelyn Landeros: “Generally speaking, we could have done more; individually we make off short and for our supporters, for the team, for our coach and for everyone. We will continue to fight for what’s left, hoping to improve and make some adjustments. We were to anxious, we weren’t thinking when we were attacking, the same happened in serves, we failed a lot in serves, our blocking wasn’t effective enough because they are taller, stronger and with higher reach than us. We need to be smarter.”

Costa Rica made quick work of Guatemala to rebound from their quarterfinals loss by dominating in the serving game (10-2 in aces) and at the net defensively (7-1 in blocks). They’ll now play for 5th place against Puerto Rico and will hope that Santa Volkovs Dumbraitis (12 points) and Susan Alpizar Campos (11 points) continue their strong play so the nation can finish on a high note. For Guatemala, they get sent to the 7th place match against Honduras where they will look to avoid a last-place mark.

Costa Rica opposite Santa Volkovs: “Our attitude was our strongest weapon in beating Guatemala. In other interviews, our captain has said that we haven’t lost our serenity and today we confirm it once again. We controlled every aspect of the game, we did it well.”

Guatemala wing spiker Arianne Tenenbaum: “It’s a really tough loss, we weren’t expecting this result. Our mental state was off, we really pressured ourselves because we wanted badly to beat Costa Rica. Guatemala was prepared, we knew what to execute, and we need to find confidence in our skills.”

Puerto Rico showed one game of hesitation in the third, but were the clear-cut top team in the other three that led to the four-set victory. Now they will face Costa Rica for a top five finish in the event with Honduras off to avoid last against Guatemala. Honduras actually held the strong block and wasn’t completely dominated in kills, but the Puerto Rican serve (12-3 in aces) was the difference. Honduras also saw 16 points from Nathaly Perez Jimenez, but with no one else above five points it wasn’t enough to overcome Jaylibeth Garcia (14 points), Paulina Perez (10 points) and company.

Puerto Rico head coach Rafael Olazagasti: “The only way my team can develop is theat everyone has a chance to play; our goal wasn’t only to reach the finals but to contribute in forming new players. This category is our platform for Puerto Rico’s future players. I made variations, it’s the system I’ve been using during the tournament, but I had confidence that my starters would bring a positive result. We lost the third set, but we finished the fourth by huge margin.”

Hondruas head coach Osiel Vásquez: “We are aware that there are five teams with much higher level than the three Central Americans. My opponent made changes, they played at our game level and we were able to win a set. We fought strongly; we couldn’t score more because we just can’t, but we´re happy with the result. This competition has been very important for our preparation for the upcoming Central American championship. Tomorrow we face Guatemala and our strategy is be offensive in with our serves and attack hard.”