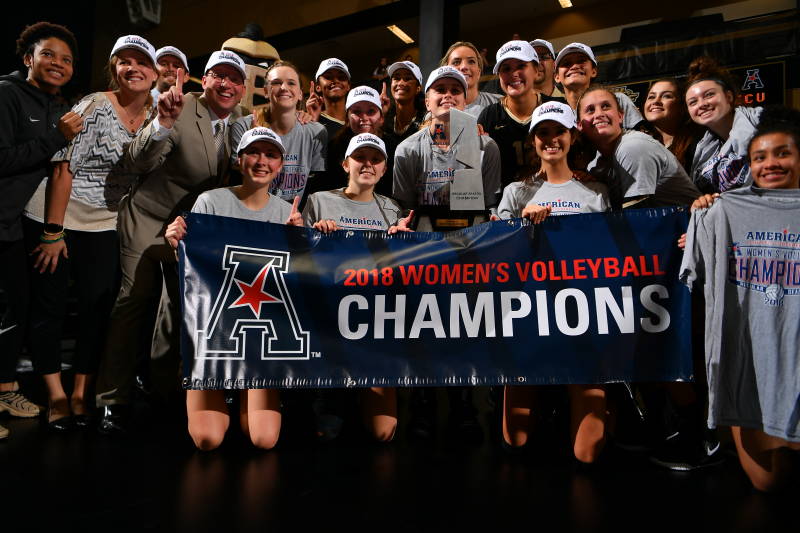 The league title is the Knights’ ninth in program history and earns the team its first NCAA Tournament appearance since 2014.  Current Photo via UCF Athletics

ORLANDO – It was a Sunday celebration in The Venue for the UCF volleyball team. The No. 22 Knights (24-3, 15-0) sealed their second American Athletic Conference Championship in five years with a sweep of ECU. The win also extended UCF’s winning streak to 21 matches, the fifth longest active unbeaten stretch in the nation.

After a slugfest with Cincinnati on Friday, the Knights turned in one of their top offensive performances of the season with a .340 clip over three sets. Freshman Briana Garcia was electric at the net converting 12 of her 19 swings for kills at a career-high .526 clip to lead all players. She was joined in double figures by Kristina Fisher with 10 scores. Anne-Marie Watson struck for eight kills at a blistering .375, while Nerissa Moravec drove home five kills on seven attempts.

McKenna Melville finished one kill shy of another double-double, as she totaled 11 digs. Senior Jordan Pingel, who has been the bedrock of this UCF squad all year, finished with a match-high 12 saves. The block only managed 5.5 rejections on the afternoon, but it played a central part in holding the Pirates to .198 for the match. Kathryn Wesolich led the way with a trio of block assists.

FIRST SET
UCF took an early three points lead at 9-6 following a kill and block assist from Garcia. The lead grew to as many as five, before ECU trimmed it back to three at 19-16. Watson powered a kill off the block to start a 6-1 run for the Black and Gold to finish the frame. Garcia was flawless on six kills from nine swings. Melville totaled five scoring swings as well.

SECOND SET
After trading points to start the set, the Knights fired off seven straight points to take a 16-7 lead, including a pair of aces from Pingel. UCF cruised on offense with a .423 hitting percentage and a 75-percent sideout mark. Fisher hammered five kills with no errors, while Pingel and Melville picked up five digs.

THIRD SET
Out of the break, the Pirates held onto an early lead before UCF leveled the score at 11-11. The Knights took multiple two-point leads, but ECU managed to climb back until the frame was tied at 21-21. A Garcia kill followed by an error by the Pirates created just enough space, before Fisher finished off the match. Watson torched five kills for a .714 attack percentage

Miss our championship-winning sweep of ECU?

NOTES TO KNOW
>> Melville’s double-double streak came to an end at nine matches.
>> Wesolich now has 120 block assists on the season. The rookie is just 22 away from tying Emily Bridson’s 1993 single-season record.
>> Pingel now has 514 digs this season, just 58 shy of the single-season record.
>> UCF dropped in seven aces on Sunday. It was the second highest total this season.

CHAMPIONS AGAIN
>> The league title was the Knights’ ninth in program history, including seven from the A-SUN between 1994 and 2003.
>> By clinching a share of the league championship and holding the tiebreaker over Cincinnati, the Knights earned The American’s automatic qualifying spot in the NCAA Tournament.
>> The Black and Gold will make their first appearance in the NCAA Tournament since 2014.
>> Head coach Todd Dagenais will take the Knights to back-to-back postseason appearances for the first time in his tenure at UCF.
>> UCF joined SMU as the only two programs to win multiple American Athletic Conference titles.

UP NEXT
The Knights will hit the road for their final regular season road trip to SMU and Houston next weekend.