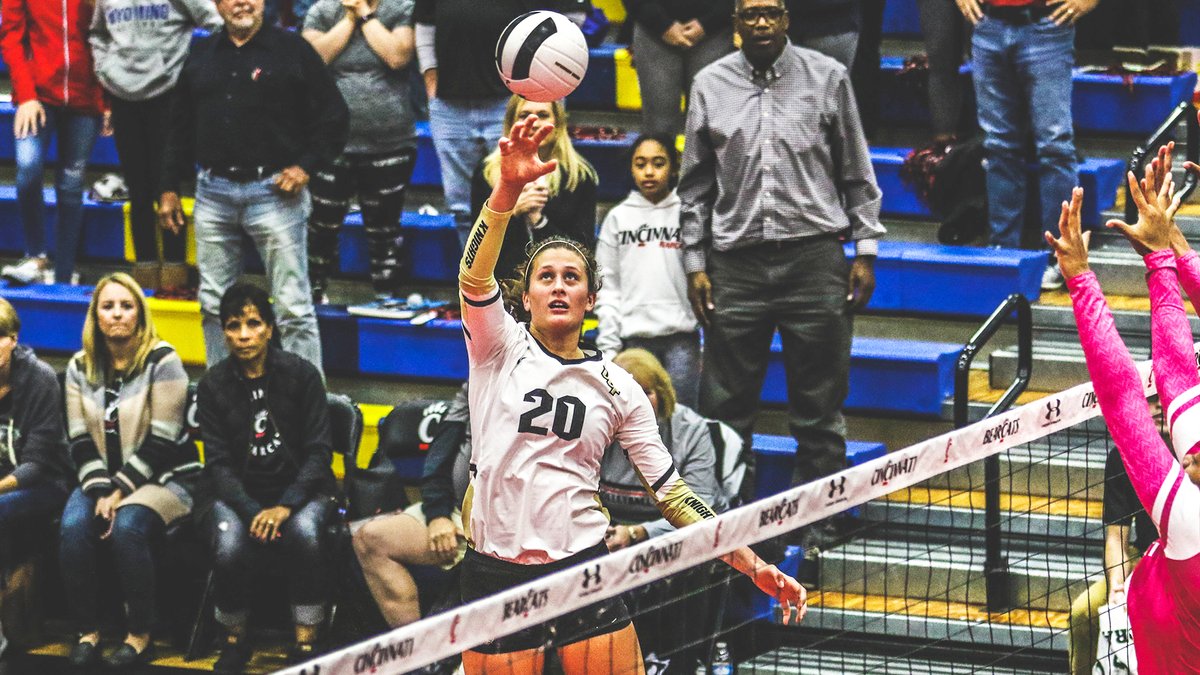 PROVIDENCE, R.I. – The American Athletic Conference has announced the winners of the league’s weekly volleyball honors for the week ending on October 28.

Melville earns her second-straight conference honor and third this season, as the freshman outside hitter continues to shine in her rookie campaign. Melville averaged 6.11 kills per set and hit .299 while recording 27 or more kills in each match with two double-doubles through another 2-0 weekend for the Knights. Melville had 27 kills and 20 digs in a five-set win over Houston on Friday and reached a career-high 28 kills and 16 digs with a .339 hitting percentage in a 3-1 win over SMU on Sunday. She leads the conference with 16 double-doubles this year, as UCF is on a 17-match swing with an 11-0 conference record.

Make that ✌️ straight Player of the Weeks for Mac!

Our fourth consecutive nod by @American_VBall.

Payne was a force at the net, recording 18 blocks through two wins and reaching the 400-blocks milestone while averaging 2.00 blocks per set. Her performance in the front row helped the Bulls stifle each of their opponents’ offenses, holding SMU and Houston to hitting below the .200 mark. The senior middle blocker also had eight digs and contributed to USF’s offense, recording 16 kills and a pair of service aces. She had 10 blocks in a 3-2 win over SMU and eight more stuffs in a 3-1 win over Houston.

The middle blocker has been named the @American_VBall Defensive Player of the Week after a ridiculous 2.0 blocks per set during our 2-0 weekend. 🤘

Pingel had another strong back row performance to help her side remain unbeaten in conference play. The senior libero averaged 6.33 digs per set and a .911 reception percentage. Pingel recorded 34 digs in a 3-2 win over Houston and bumped 23 more in a 3-1 victory over SMU. The Knights are 12-0 at the Venue this season.

Bivins made her presence felt over the weekend, averaging 5.11 kills per set on a .320 hitting percentage with 13 digs, four blocks and two service aces. After knocking down 13 kills against Cincinnati, she clobbered a career-high 33 kills while hitting .419 in an exciting 3-2 win over ECU on Sunday. Her 33 kills are the most by a Tiger since 1995, as 21 of her 33 kills came in the final three sets, including nine in the deciding fifth set. She became the second player in The American this season to reach the 30-kill milestone.

Hansel led Tulane’s offense in a 2-0 weekend at home, defeating Cincinnati on Sunday for the first time since 1995 after beating ECU on Friday night. The junior right side hitter recorded double-digit kills in both performances, tallying 15 against the Pirates while hitting .560 and 13 against the Bearcats while hitting .379, averaging 3.50 kills per set and a .463 hitting percentage.

Horsfall once again bolstered the back line for the Golden Hurricane’s defense, picking up 39 digs for a 5.57 digs per set mark en route to leading Tulsa to a perfect 2-0 weekend at home. The 2-0 record improves Tulsa’s home record in 2018 to 10-1. She had 22 digs against Temple and 17 against UConn.

Koon hit .462 with 19 kills on 39 attempts with just one error through two sweep victories, boosting the Shockers’ offense to hitting over .300 in both wins. She posted a match-high 12 kills on 23 attempts with only one error for a .478 attack percentage against Temple and hit .438 with seven kills against UConn.