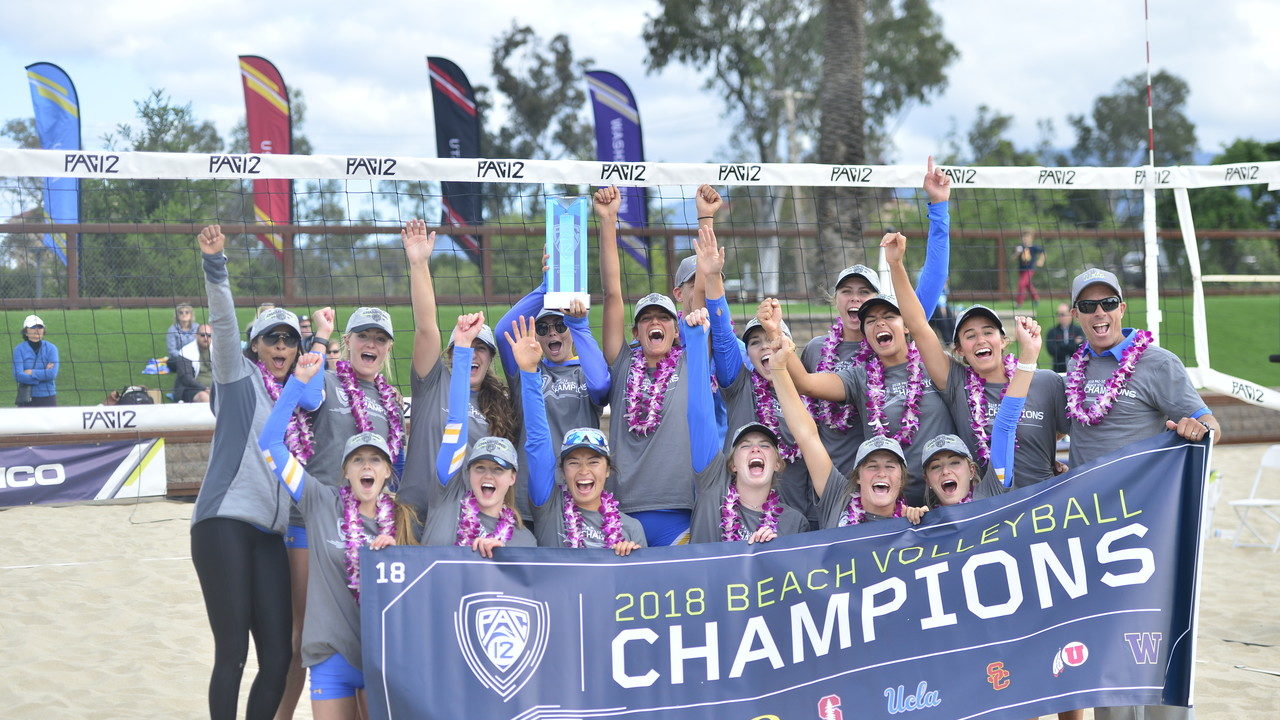 No. 1-ranked and top-seeded UCLA defeated USC to claim the Bruins’ first-ever Pac-12 Beach Volleyball Championship crown on Saturday afternoon at the Stanford Beach Volleyball Stadium. The Bruins did not drop a dual in the three-day event, extending their program-record win streak to 30 in a row. Current Photo via Pac-12 Conference

STANFORD, Calif. – No. 1-ranked and top-seeded UCLA defeated USC to claim the Bruins’ first-ever Pac-12 Beach Volleyball Championship crown on Saturday afternoon at the Stanford Beach Volleyball Stadium. The Bruins did not drop a dual in the three-day event, extending their program-record win streak to 30 in a row.

The Bruins won points at the No. 1, 2 and 4 pairs. Elise Zappia and Mac May claimed the team’s first point but the USC pair of Alexandra Poletto and Haley Hallgren won a close match at No. 5 to even the score, 1-1. In the second round, twins Nicole McNamara and Megan McNamara held off USC’s top pair of Tina Graudina and Abril Bustamante to win the first set, 21-19, then won in convincing fashion in the second, 21-15, to give UCLA a 2-1 lead. It was the first time this season the twins had defeated the Trojan pair, including a loss in the morning semifinal.

Zappia earned her 100th career win in the match, becoming the first Bruins to reach the milestone.

The deciding point came from the No. 3 pair of Savvy Simo and Madi Yeomans. The due did not lose a set all week, claiming the championship point by a score of 21-19, 21-16.

The day opened with back-to-back 3-2 decisions. Third-seeded Cal won the No. 4 and No. 5 pairs to take a 2-0 lead. But sixth-seeded Washington was hoping for another upset after upending fourth-seeded Stanford on Friday night. The Huskies won at No. 1 and No. 2 handily, evening the score at 2-2. Though winning in straight sets, Cal’s Iya Lindahl and Alexia Inman had to hold off UW’s Courtney Schwan and Destiny Julye, 24-22 and 26-24, to claim the winning point and Cal advanced to the contender’s final.

In the contender’s final, USC took care of business quickly, winning, 5-0, to advance to the championship dual rematch. The previous four meetings between the Trojans and Bruins this season had been decided 3-2 in either direction. The teams also met twice in last year’s championship, both duals also going 3-2, with the Bruins winning in last year’s semifinal. The Trojans got paybacks in the championship dual, however, winning their second-consecutive title.

In the morning’s semifinal, the Bruins and Trojans opened the day and needed to go the distance for a decision in first dual of the day. UCLA won 3-2 with the final point decided by Lily Justine and Sarah Sponcil at No. 2.

Five pairs were named to the all-tournament team, as voted on by the Pac-12 beach volleyball coaches: UW’s Schwan and Julye (No. 2 pair); USC’s Graudina and Bustamante (No. 1 pair); UCLA’s Simo and Yeoman’s (No. 3 pair), Justine and Sponcil (No. 2 pair), and the McNamara twins (No. 1 pair).

We are live at the #Pac12BVB Champions Award ceremony.