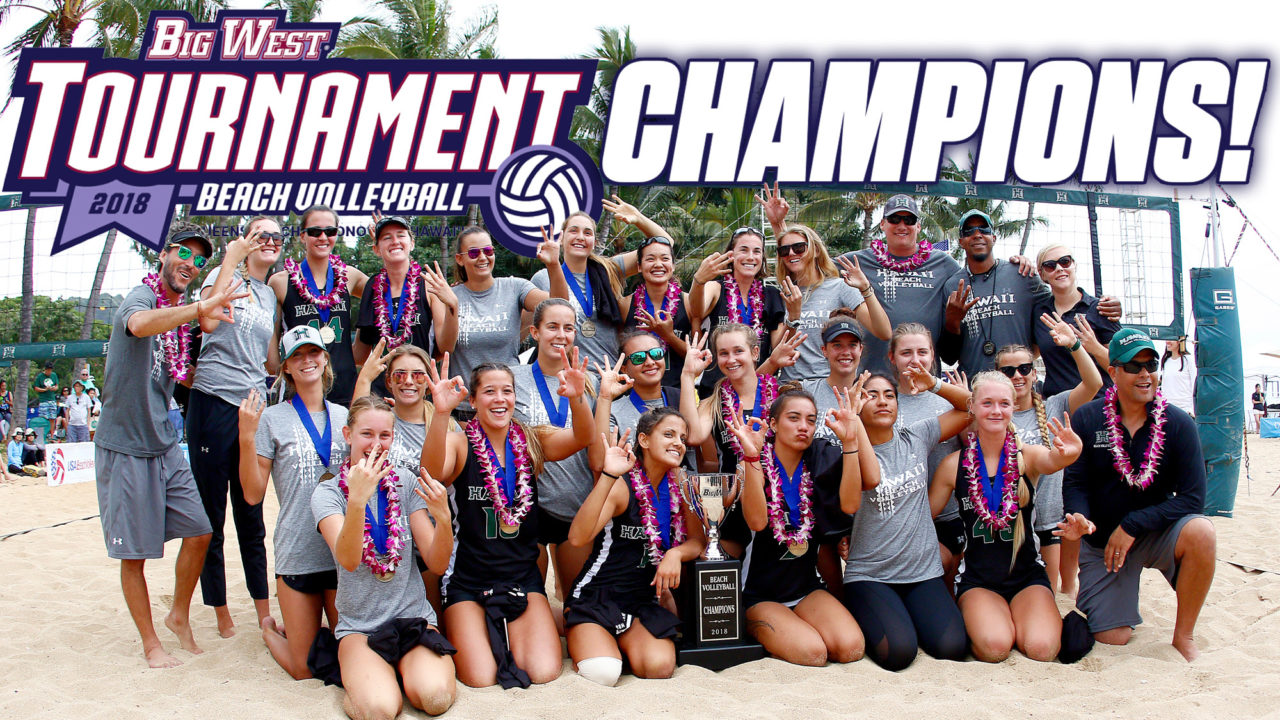 HONOLULU – The No. 3 University of Hawai’i women’s beach volleyball team captured its third straight Big West Tournament with a pair of wins over Long Beach State Saturday at Queen’s Beach. The Rainbow Wahine blanked the 49ers, 5-0, in a winners bracket meeting before taking down the 49ers, 4-1, in the title match.

It was a familiar route for the Rainbow Wahine (35-3) who defeated the 49ers (26-8) twice in each of its previous two title runs. UH is now 9-0 all-time in the Big West Tournament.

UH won in straight sets on four of five courts in the first meeting of the day vs. LBSU, but were pushed to three sets on all but one court in the finals. In the finals, UH took a 2-0 lead with a straight set win by Carly Kan and Laurel Weaver on Court 3 and a three-set win by Paige Dreeuws and Hannah Zalopany at Court 5. UH clinched the third and decisive point on Court 2 when Morgan Martin and Lea Monkhouse rallied for a  17-21, 21-7, 16-14 win over Megan Kruidhof and Rachel Nieto.

On Court 4, Ari Homayun and Amy Ozee dropped their first set in nearly a month when they fell 26-24 in the opening frame to Claire Newlander and Hailey Harward. But they rallied to win the next two sets and have now won 24 straight matches.

In the conclusion of the finals at the top flight, Nele Barber and Sasha Karelov rallied past Ka’iwi Schucht and Emily Maglio 20-22, 21-11, 18-16  to end the pair’s school-record 25-match win streak. It was the only point that UH dropped all weekend in an otherwise spotless performance while hosting the tournament for the first-time ever. UH has defeated Long Beach State in eight of the last nine meetings with six of those wins coming in the Big West Tournament.

A winner of 30 straight matches, UH now await its position in the NCAA Tournament to be held May 4-6, in Gulf Shores, Ala. The selection show will be at 1:00 p.m. HT Sunday on NCAA.com.

Meanwhile, the Big West Tournament continues tomorrow at Queen’s Beach with the Pairs Championship. A total of 16 pairs – including UH’s top four – will compete in a single-elimination bracket. First serve is at 10 a.m.

Hear from @UHBeachVolley 4-pair Amy Ozee & Ari Homayun after clinching the Big West title. This pair has also won 24-straight ? "It's always the goal to defend this beach."#RaiseTheCup | #GoBows pic.twitter.com/T0QAdikxDS