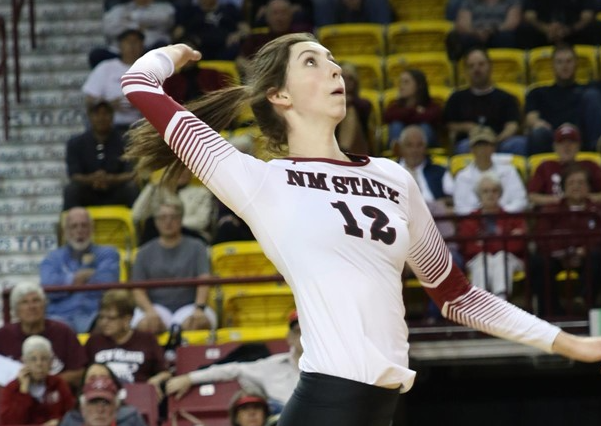 DENVER – Kansas City senior middle hitter Tyrecia Lukes and NM State junior middle blocker Megan Hart have been named the Western Athletic Conference Offensive and Defensive Volleyball Players of the Week, respectively, for the week of Oct. 15-21. This is the second WAC Player of the Week honor of the season and of her career for Lukes and the first-ever honor for Hart.

Lukes, a Miami, Fla., native led the WAC with a .632 hitting percentage last week. In a sweep of Grand Canyon, she finished with 13 kills on 19 attempts with just one hitting error for the .632 clip and a 4.33 kills per set average. It was the fifth time this season Lukes has hit over .600. She currently leads the WAC and ranks ninth in the NCAA in hitting percentage (.418) while averaging 3.19 kills per set.

For the second time this season @Tyrecialukes21 is named @WACsports Offensive Player of the Week! Watch Ty and the rest of the Roos on the road this weekend! #WACvb #TeamKC #RooUp pic.twitter.com/AsTedZztE3

Hart, a Kelowna, British Columbia, Canada native, had an outstanding week defensively for the Aggies, both at the net and in the back row. She led the WAC with 1.86 blocks per set and also averaged 1.86 digs per set as NM State went 2-0 on the week to extend its home winning streak to 20 matches. The middle blocker posted her first career double-double when she recorded 12 kills and 11 digs in a four-set victory against Utah Valley, adding a team-high six blocks in the match. Hart closed out the weekend with a match-high seven blocks in a sweep of CSU Bakersfield. She currently ranks fifth in the WAC with 1.05 blocks per set.