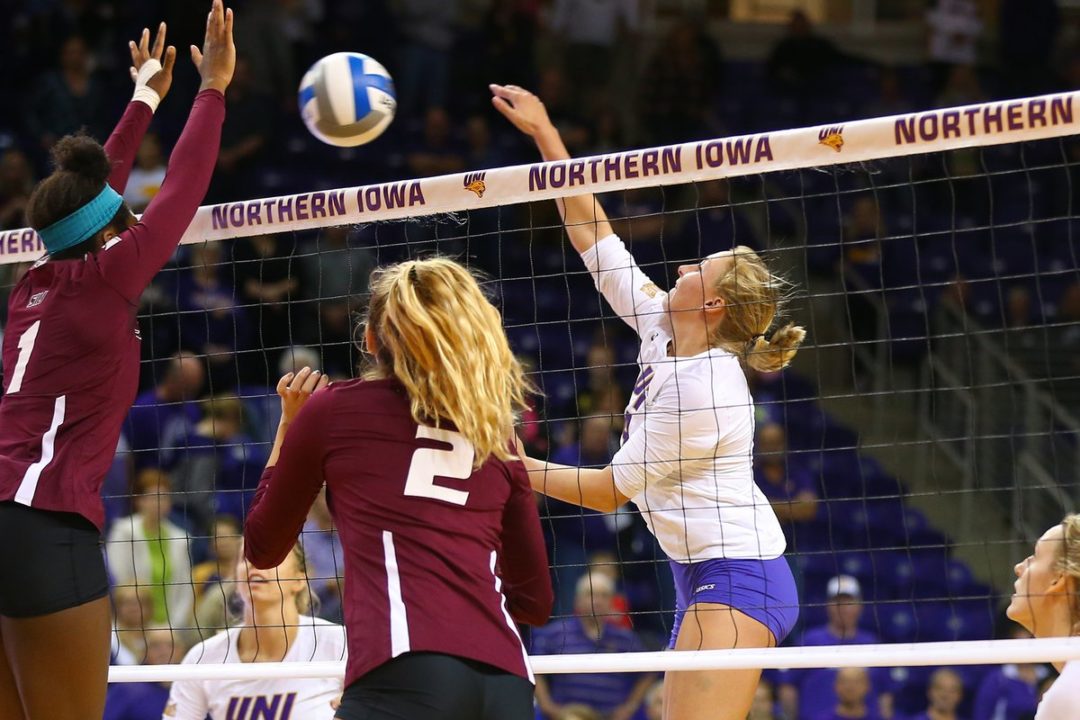 CEDAR FALLS, Iowa – Northern Iowa made quick work of Southern Illinois Friday night, dominating the match by more than doubling up on the Salukis offensively.

Three players reached double digit dig tallies including outside hitter, who tallied 11 putaways to surpass the 1,000 kill milestone for her career. Even more impressive is that the junior is now a member of the 1000-kill, 1000-dig club, having reached the saves milestone Sept. 15 vs. Omaha. She now has recorded 1,001 kills and 1,145 digs, including 44 career double-doubles.

Sophomore outside Karlie Taylor carried the offensive load for the Panthers with 16 kills to go with 13 digs and five aces. Junior middle blocker Piper Thomas added 12 kills and Weber followed with 11 kills and 15 digs. Junior libero Kendyl Sorge was tops on defense with 16 digs.

The Panthers snapped a 7-all tie in Set 1 with an 10-2 run, including kills by six different players. Down 17-10, SIU scored three of the next four, two on UNI errors, to pull within five, but they would get no closer. The Panthers wrapped the stanza with three straight points, all on Saluki miscues.

Northern Iowa raced ahead 10-3 in Set 2 with help from three kills and a block by Thomas. Weber turned in three kills as the Panthers stretched the lead to 11 at 19-8. Taylor notched a trio of putaways to lift UNI to a 22-10 advantage. A Moriah Johnson kill made it 24-12 and a Weber kill capped the set three points later.

A 5-0 midset run, including two Weber putaways, lifted UNI to a 16-9 lead in Set 3. Another three-point run featuring kills by Thomas and Taylor and a Lexi Astor ace, gave the Panthers a 20-11 edge. Southern Illinois did not go away quietly, however, scoring six of the next seven, three on Northern Iowa errors and two on a block and an ace by Brown, to pull within four at 21-17. UNI called timeout and came out of the break with four straight, two on Jaydlin Seeehase kills and the final two on Taylor aces.

Junior Bri Weber collected her 1,000th career kill and the University of Northern Iowa volleyball team rolled to a 3-0 victory over the Southern Illinois Salukis on Friday in the McLeod Center. UNI won by set scores of 25-16, 25-14, 25-17.

Sophomore Karlie Taylor led the attack with her 14th consecutive double-figure kill match and fourth straight double-double. Taylor tallied 16 kills and 13 digs with a .394 attack percentage for her 13th double-double on the year. Taylor closed out the match with back-to-back service aces that gave her a career-high five aces in the match.

UNI will return to the McLeod Center on Saturday to take on the Missouri State Bears. The Panthers and Bears will get underway at 7 p.m.

Sophomore setter Alayna Martin notched her sixth double-double of the season, as she dished out 11 assists and tallied a team-best 13 digs. Senior libero Ashley Edelen added 10 digs, which marked the 11th-straight match in which the Louisville, Ky. product has finished with at least 10 digs.

Two kills each by Fredriksson and Barrow staked SIU to an early 7-6 lead in the opening set before a 9-2 run put Northern Iowa ahead 15-9. Southern cut the deficit to five on four occasions, but the Panthers took set one, 25-17.

The Panthers’ momentum carried over into the second set, as they opened an early 10-3 lead and took their largest lead, 23-11, on a Saluki attack error. Fredriksson’s third kill of the frame and a solo stuff by Brown helped SIU stave off set point, but UNI sided out to take the second set, 25-14.

The Salukis got caught in a rotation in the third set as the Panthers used a 5-0 run to go up 16-9. A kill, followed by an ace by Brown highlighted a 5-0 run for Southern that got it to within four, 21-17, but Northern Iowa closed out the set, and the match, with four-straight points.

The Salukis are back on the road tomorrow, Oct. 14 at Drake. The match is scheduled for a 7 p.m. start time.