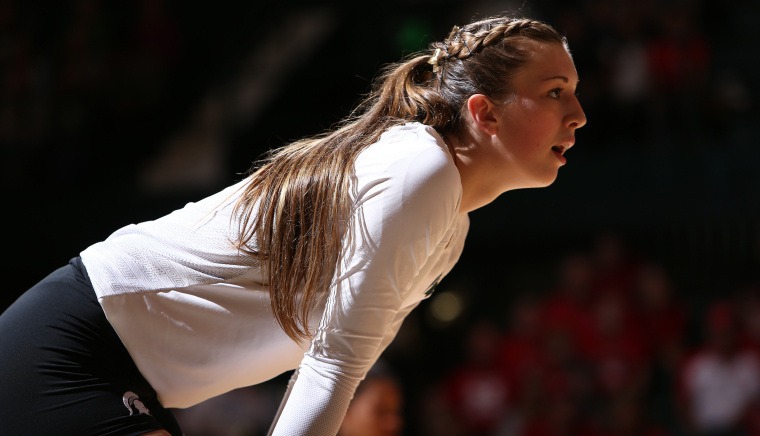 Michigan State faced a rough first set, falling 12-25 against the Gophers. However, the Spartans managed to pull together and defeat Minnesota in the second and third sets by tight margins. The Spartans’ 14 team blocks really helped them out in the fourth set, gaining a 7-point lead. Garvelink had 5 kills and 3 blocks in the fourth set alone, as Michigan State took game 25-18.

The Spartans took the fifth set by just two points to claim the upset.

MSU hit just .201 on the match, recovering from a .059 hitting percentage in the opening set and .150 in the second, and held Minnesota to .268. MSU had its most blocks since last November by posting 15, while Minnesota is just the second Big Ten team to reach double-digits against the Spartans with 10. MSU also had eight service aces to five for the Gophers.

Sarah Wilhite had a double-double for Minnesota, with 20 kills and 19 digs.

MSU rebounded not only from a rough first set, but also a 3-0 setback on the road at No. 24 Illinois on Wednesday. Minnesota was coming off a three-set sweep of No. 1 Wisconsin in Madison on Wednesday, and falls to 14-3, 6-2 Big Ten. MSU is now 16-4 overall and improves to 5-3 in Conference play.

The Spartans return home for a Wednesday night match against Rutgers at Jenison Field House. The match will be televised live on Big Ten Network at 6 pm, and will be MSU’s Breast Cancer Awareness match. Fans are encouraged to wear pink.

What’s Next: The Spartans will face Rutgers at home Wednesday at 6 p.m., and will travel to Ohio to face the Buckeyes on Friday night at 6 p.m.

The No. 3 University of Minnesota volleyball team fell to No. 14 Michigan State in five sets, tonight, in East Lansing, Mich. With the loss, the Golden Gophers fall to 14-3 overall and 6-2 in the Big Ten. MSU improves to 16-4 overall and 5-3 in league action.

Minnesota is on the road again next weekend when it travels to Iowa and No. 2 Nebraska, Friday and Sunday. Friday’s match is in Iowa City, Iowa at 6 p.m., while Minnesota plays in Lincoln, Neb., Sunday at 1 p.m. Both matches are on BTN.

Set 1: The Gophers hit a stifling .483 and 84 sideout percent to take a 25-12 first set win. Minnesota opened the match with a 5-1 lead. A Hart kill put Minnesota up, 9-3, which forced MSU to burn its first timeout of the set. A Wilhite tip later put the Gopher lead to 12-5, while a H Tapp kill put the deficit to 17-8. A Lohman/P Tapp block pushed the score to 19-11, while Hart added Minnesota‘s 20-12 point. After an MSU ball handling error, the Spartans used their second timeout of the set. The Gophers, however, came out of the break and had a kill from Wilhite, a P Tapp/Seliger-Swenson block, a P Tapp kill put it at set point, while an MSU attack error gave the Gophers a 1-0 lead.

Set 2: MSU had five blocks in the set to win, 25-20. Minnesota hit just .061 in the set to MSU’s .150. Michigan State opened up the second set with a 9-5 lead which forced Minnesota to call a timeout. The Spartans came out of the break and delivered an ace for a 10-5 lead. After a Spartan kill and a block, the Gophers called a timeout at 15-8. The Spartan lead was as large as 19-10 before the Gophers started chipping away. Minnesota went on a 4-1 run to cut the lead to 21-17 off a Wilhite kill as the Spartans called a timeout. The Gophers came within three at 23-20 off a Hart kill, but the Spartans finished off the set on a Gopher attack error and a Spartan block to tie up the match, 1-1.

Set 3: The Spartans rallied to take the third set, 25-21. Minnesota opened the third set with a 5-1 lead. The Gophers pushed the lead to 7-2 off a P Tapp kill, which led MSU to call a timeout. MSU responded out of the timeout and rattled off three-straight for a 7-5 Gopher lead. As the Gophers led 9-5, MSU added another three-straight as Minnesota called a timeout at 9-8. MSU tied the set at 11-11 off a kill. Minnesota had a two-point lead at 13-11 and 15-13 before MSU came back to tie both times before the Spartans took their first lead of the set at 16-15. The Gophers responded with three-straight on a Hart kill, a MSU attack error and a Rosado ace for an 18-16 lead. With a 20-17 Gophers lead, MSU came back and had a kill and an ace as Minnesota called a timeout. As the two teams tied it at 21, MSU finished off the set on a 4-0 run for a 25-21 set win.

Set 4: The Gophers tied up the match with a 25-18 fourth set win. Minnesota hit .316 in the set to MSU’s .225. Minnesota took a narrow 9-6 lead off a P Tapp ace, but MSU came back to tie the set at 9-9 and take a 10-9 lead off a kill. After the two tied it up at 11-11, MSU took a 12-11 lead as the Gophers called a timeout. The Gophers went on a 4-1 run and took a 17-14 lead as the Spartans called a timeout. The Minnesota lead increased to 21-15 when MSU had two errors, one service, one attack, while Wilhite added two kills. With kills from Seliger-Swenson and Wilhite, Minnesota led 23-16 as MSU used its last timeout. Wilhite finished off the set with two kills as the Gophers pushed game five.

Set 5: MSU finished off the match with a 15-13 set win. Despite Minnesota hitting .389 in the set to MSU’s .368, the Spartans took home the win. The two teams traded points through 6-6 before MSU had two kills for an 8-6 lead. MSU added a block for a 9-6 lead as Minnesota called a timeout. The Spartans added to their lead when they added a kill and an ace to take an 11-6 lead. The Gophers used their second timeout of the set. Minnesota responded and cut the Spartan lead to two off a Wilhite kill, a MSU attack error and a Wilhite block. MSU went up 13-11 off a kill. As MSU led 14-12, Hart provided a kill, but MSU finished off the match with a kill for the five-set win.

Up Next: The Gophers will face Iowa Friday at 6 p.m. on the road and will travel to Nebraska to face the Huskers on Sunday at 1 p.m.