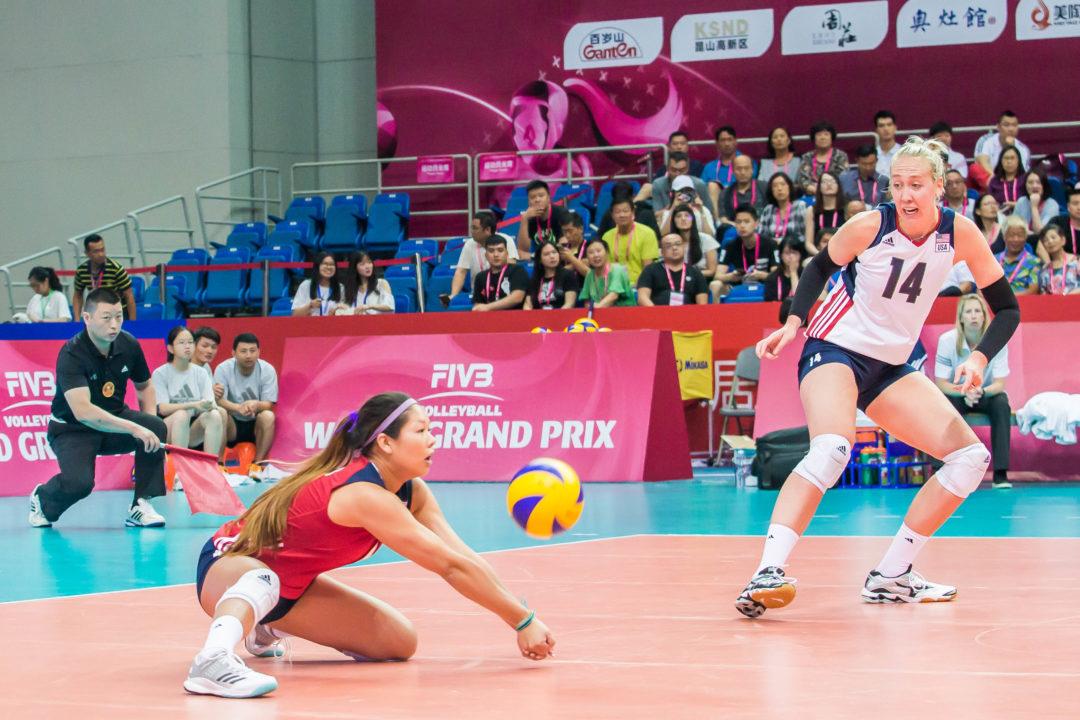 Justine Wong-Orantes, who recently finished a tour winning gold with the US at the Volleyball Nations League, will turn around quickly to join the Pan American Cup roster. Archive Photo via FIVB

USA Volleyball has announced its 14-player roster for the 2018 Pan American Cup that will be held from July 8th-14th in Santo Domingo, Dominican Republic. The group was chosen from among a preliminary 25-woman roster that have been participating in a training camp in Anaheim since May.

The tournament, considered largely a “B” team roster, is described by USA Volleyball as a “young team.” While by American standards, that’s true, as most of the chosen players graduated from college in the last two years, by international standards, 23 and 24 year olds often have years of international experience.

Among the noteworthy choices for the roster are the liberos Amanda Benson and Justine Wong-Orantes. The two were actually the liberos on the week 1 roster for the USA at the Volleyball Nations League, the country’s primary early-summer tournament. Wong-Orantes struggled with consistency in that week of play, and Benson never got a chance, and by match 3, outside hitter Kelsey Robinson had been installed as the team’s new libero, and she held on to the starting role for the remainder of the tournament. While Robinson stabilized the American defense, and helped drive them forward to the first-ever VNL title, the switch did limit a valuable development opportunity for the ‘true liberos’ on the roster.

So Wong-Orantes and Benson are being sent to the Pan American Cup instead to get some valuable reps in. The court time will be especially useful for Wong-Orantes, who didn’t play professionally last season, instead serving on the Long Beach State coaching staff.

Missing from the roster is 6’4″, 25-year old opposite Karsta Lowe. Lowe, a 2014 Olympian, retired from volleyball after the 2016 Olympic Games, but rejoined the team in May with a plan to make a full comeback to volleyball. She participated in the red versus blue scrimmage, but wound up not being chosen for this Pan Am Games roster.

The rest of the roster includes a veritable who’s-who of recent American collegiate stars. That includes setter Lauren Carlini, who was the 2017 Sullivan Award winner as the top American amateur athlete; and former Alabama star Krystal Rivers, who was one of the top collegiate scorers in the country during her NCAA career, and last year parlayed that into becoming the #1 scorer (by a whopping 45 points) in the French Ligue A. The 2016 NCAA Player of the Year Sarah Wilhite, and other star All-Americans from recent seasons like Paige Tapp, Kadie Rolfzen, Adora Anae, and Haleigh Washingtonalso highlight the roster.

7 members of the team will be making their international debuts, including Jordyn Poulter, a setter from Illinois – the only player on the roster with collegiate eligibility remaining.

“The roster selection was a real challenge for our staff, as it should be, when we have the depth of talent that we had in the gym for this training block,” said the team’s head coach Jon Newman-Gonchar said. “We had athletes make great strides in the short time we were together, which made determining our final 14 a heavy task.”