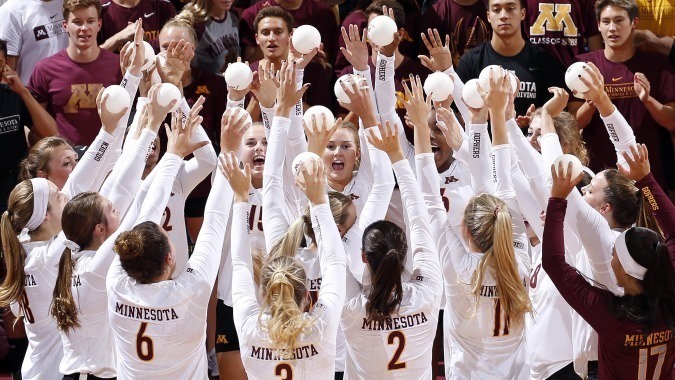 Minnesota will be represented by 11 players at the USA Volleyball open tryout. Archive Photo via Minnesota Athletics

USA Volleyball has announced a roster of 245 athletes who will participate in an open tryout in early March for a spot on several different U.S. National Team rosters. The tryout will be held from March 3rd-5th and will be used to evaluate players for the U.S. Senior National Team and the U.S. Collegiate National Team.

The camp will be directed by U.S. Women’s National Team head coach Karch Kiraly, who is also the head coach at UCLA. The whole tryout will be streamed live here.

Selected athletes for the U.S. Women’s National Team may begin their training in Anaheim, California, as early as the spring of 2017, or when an athlete’s scholastic or professional club season has concluded. The U.S. Collegiate National Team will be selected by the end of March.

A breakdown of the participants by position:

The defending NCAA women’s champions from Stanford aren’t represented at the camp; the runners-up from Texas will have 10 players at the camp – which includes another freshman Brionne Butler, who has enrolled early.

Nebraska, like Stanford, won’t be represented in the camp, but Minnesota, the other Final 4 team, like Texas is showing up en force – with 11 players, more than any other school.

Kiraly’s UCLA team will have two players in attendance as well – including middle Madeleine Gates and setter Kylie Miller.

While the U.S> National Team staff is running the camp, a number of coaches from all walks of the sport were invited from around the country to serve as court coaches and coders (or stat takers) for the event.

USA Volleyball told VolleyMob earlier this year that players will play 2 days of 6 vs. 6 in waves, after which they will be divided into teams and play a tiered tournament on the final day.

While this tryout isn’t the only way for players to be placed on a National Team, it is a valuable tool for coaches to unearth players. For example, 2014 FIVB World Championships MVP Kim Hill was identified from a similar open camp.

The camp was open to current college athletes born in the year 1989-1999. Junior athletes both in 1998 and 1999 and not currently enrolled in college had to be invited specifically to the camp.

A full breakdown of where the players are coming from, plus a list of all of the players, is below: