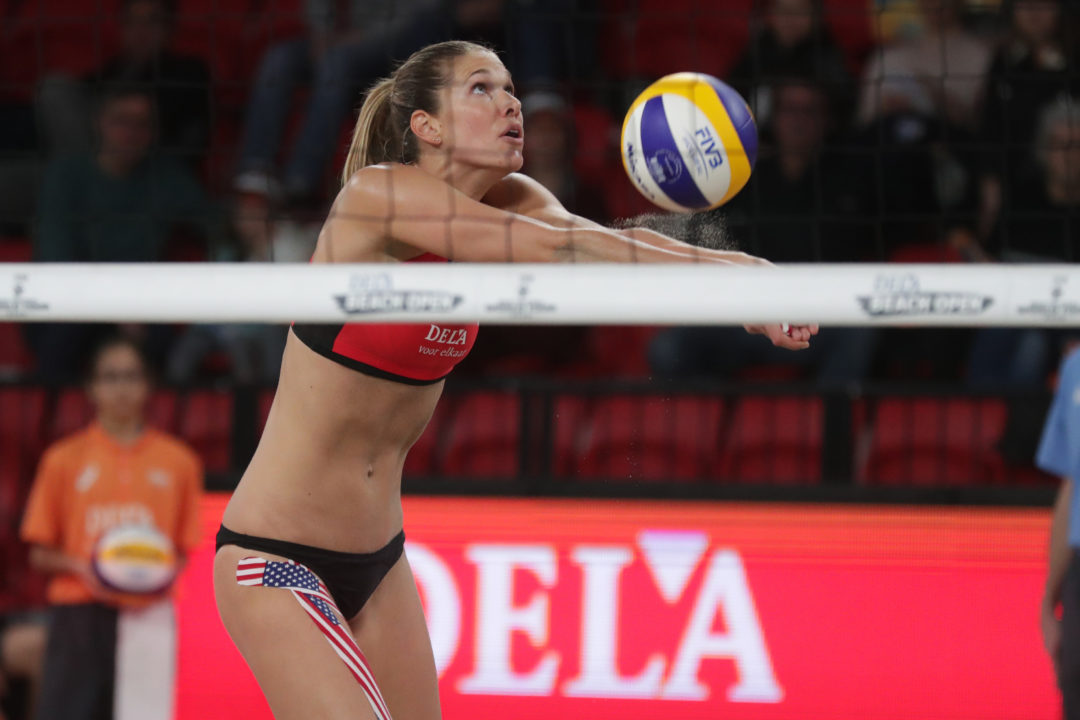 In November, Alix Klineman was found to have accidentally ingested a banned substance for the 2nd time in her career. Archive Photo via FIVB

AVP professional beach volleyball player Alix Klineman has been given a “no fault or negligence” ruling by the United States Anti-Doping Association (USADA) after testing positive for a banned substance.

The ruling, handed down on November 30th, 2017, came after she tested positive for the banned substances hydrochlorothiazide and triamterene in an out-of-competition sample collection on July 25th, 2017. Both drugs are classified as masking agents.

The USADA, during its investigation, says that Klineman provided them with records for a “permitted oral prescription medication” she was taking at the time of her positive test. That medication did not list hydrochlorothiazide or triamterene on the label; however, a detailed analysis of the tables found out that they were contaminated with the two banned substances.

As a result of the findings, the USADA did not give Klineman any period of ineligibility. Normally under these circumstances, results obtained from the event where the positive test would still be disqualified, but as this was an out-of-competition test, there were no results that were disqualified either.

There are precedents set around the sports world for not leveling suspensions when athletes are be able to prove (rather than just claim) that prescription medicines were unintentionally contaminated with banned substances. Brazilian swimmers Cesar Cielo, Henrique Barbosa, and Nicholas dos Santos in 2011 tested positive for a banned substance, but were able to prove that the most famous of the three, Cielo, had the caffeine pills that they were all taken rigorously-tested for banned substances, including the furosemide (also a masking agent) that wound up in them.

The Brazilian athletes were warned, which is technically different than Klineman’s result, which is effectively no sanction. That’s relevant, because a “warning” for accidental ingestion does not necessarily let an athlete off without a suspension on a second test, as was the case in that Brazilian doping case. A 4th swimmer involved by taking the same pills was given a 1-year suspension, as he’d previously been hit with a doping ban.

The 27-year old Klineman was suspended for 13 months in 2013 by USADA after a positive test for an Androgenic Anabolic Steroid, that they accepted at the time as a result of “inadvertent ingestion of her mother’s DHEA supplement.”

Klineman is now partnered with April Ross, and the two won the AVP Austin Open this weekend in Texas. The 6’5″ Klineman had a successful indoor career before returning to the beach in 2016. Last season on the AVP tour she won $15,487.00 while playing with a number of partners, including Jace Pardon. She and Lane Carico had a best finish of 2nd in San Francisco.

She and Ross have also played 4 FIVB tour stops together, most notably their first tournament together in early January at the 4-star event in the Hague, earning them $10,000 each.

Klineman has not yet been tested by USADA in 2018 according to their public records, though there are other anti-doping organizations eligible to test her (including FIVB at the World Tour events).