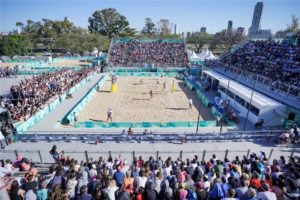 Team USA’s Tim Brewster and John Schwengel were successful today in their Round of 24 match-up against Brazilian pair João Pedro/Gabriel. The match was a real battle for the Americans, who took it 2-0 but with set scores of 25-23, 21-18, which shows the game was played at the teams’ absolute performance limit. The American pair will now move on to play Swiss duo Gysin/Broch in the Round of 16. The next phase of the competition will be a tough affair for the Americans, as their European opponents finished the preliminaries ahead of of Pool A with only one set lost at the tournament so far.

Meanwhile, in the girls’ competition, Team USA’s Newberry/Sparks, who had a “bye” for the Round of 24, learned who their opponents will be for the next phase will be, as Peru’s Allcca–Mendoza came back from behind to defeat Canada’s Roskic–Vermette 2-1 (19-21, 21-15, 15-12), thus preventing one of NORCECA’s hottest derbies.

As a side note, the gold and silver medalists at the 2018 FIVB Beach Volleyball U19 World Championships, Russia’s Shekunov/Veretiuk and Germany’s Pfretzschner/John, respectively, are also booked a spot in the next round, and are rightfully so tournament favorites. The same is true for the gold, silver, and bronzee medalists at the girls competition of the same year as well, Russia’s Bocharova/Voronina, Netherlands’s Schoon/Driel, and Spain’s Alvarez/Moreno, respectively

Great win against Brazil today! Playing Switzerland at 9am pst in the round of 16! Let’s gooo🇺🇸

Going into the next round after a great match against Brazil. Playing Switzerland in the round of 16 tomorrow at 1 pm, 9 am PST. @usavbeach

Boys’ Round of 24 Results

Boys’ Round of 16 Match-Ups

Girls’ Round of 24 Results

Girls Round of 16 Match-Ups