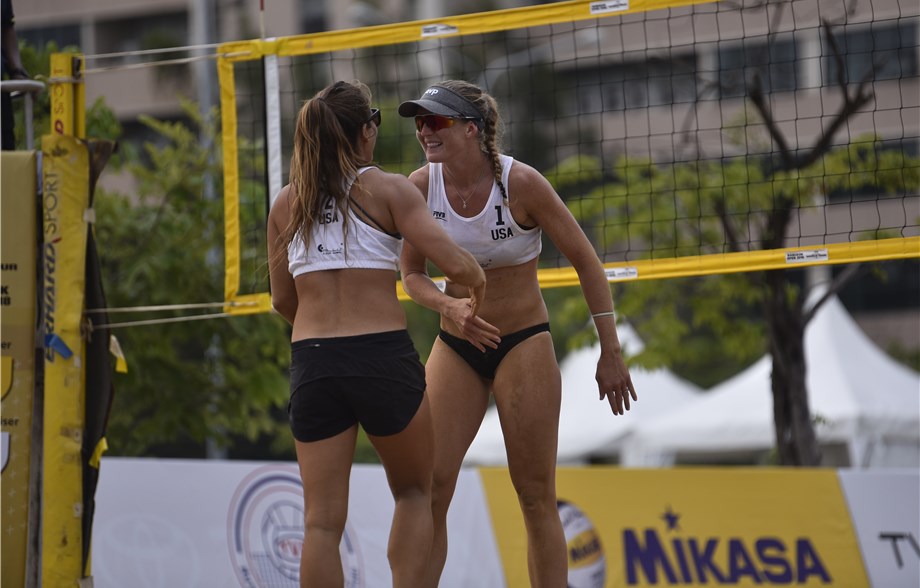 Americans Bree Scarbrough/Aurora Davis finished off a dream opening FIVB tournament with the gold medal at the Bangkok One Star on Sunday, while Japan's Yusuke Ishijima/Takumi Takahashi won the title in their third FIVB effort.  Current Photo via FIVB

Americans Bree Scarbrough/Aurora Davis finished off a dream opening FIVB tournament with the gold medal at the Bangkok One Star on Sunday.

The duo, which was competing in its second FIVB World Tour event, won six straight matches to go from the qualifiers to the title, including two tiebreak matches on Sunday.

In the semifinals, the Americans edged past Japan’s Ayumi Kusano/Takemi Nishibori 12-21, 21-17, 15-8. Once in the final, the pair used a strong blocking presence and serve to top Spain’s Maria Carro/Paula Soria 21-13, 18-21, 15-8 for the gold. Carro/Soria secured their second straight silver medal following the Manila One-Star last weekend.

Kusano/Nishibori went on to take the bronze, besting Canadians Nicole McNamara/Megan McNamara in straight sets. The Canadians were making their FIVB debut after finishing their junior year at UCLA, while the Japanese pair secured its second straight podium finish, following Manila gold.

On the men’s side, Japan’s Yusuke Ishijima/Takumi Takahashi, the No. 6 seed, topped fourth seeded Austrians Florian Schnetzer/Daniel Mullner for the gold medal after a pair of straight set victories on Sunday.

The Japanese pair, which was playing in its third FIVB event as a duo, topped Russians Aleksandr Kramarenko/Taras Myskiv in straight sets in the semifinals before downing Schnetzer/Mullner.

Schnetzer/Mullner made the final with a 21-18, 24-22 win over Spain’s Javier Huerta/Alejandro Huerta. The Spaniards picked up the bronze medal with a 21-18, 19-21, 18-16 win over the Russians, improving on their fourth-place finish at last week’s Manila One Star.