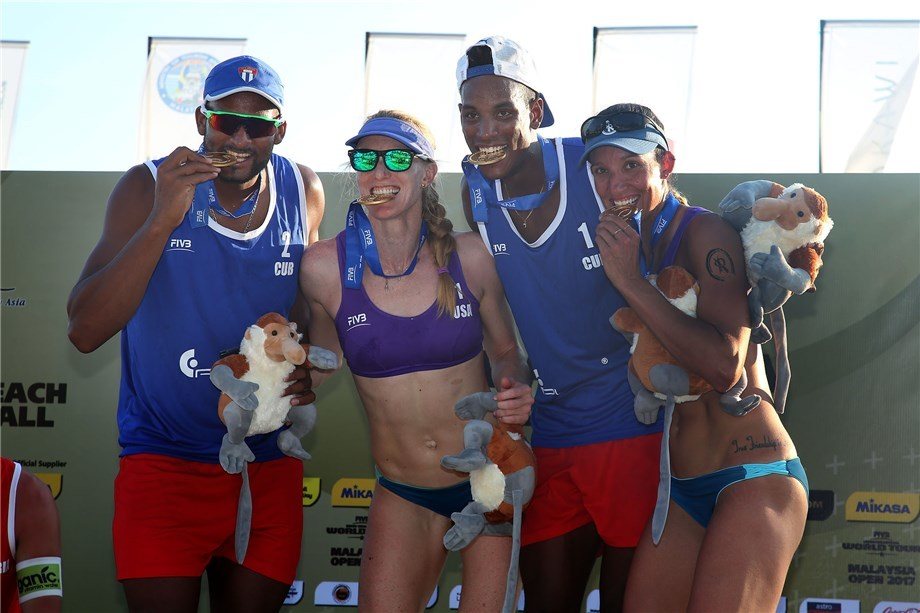 After two days of play at the Malaysia Open in Langkawi, Cuba’s Nivaldo Diaz and Sergio Gonzalez and the U.S.’s... Current Photo via FIVB

After two days of play at the Malaysia Open in Langkawi, Cuba’s Nivaldo Diaz and Sergio Gonzalez and the U.S.’s Emily Stockman and Kimberly Dicello stood atop the podium.

32 teams from 17 different countries took part in the competition that took place from April 15-16. The winners of the event were the ones to watch out for at the tournament, having had Olympic experience under their belts.

After a 33 hour flight to get to the tournament, the Cubans came out strong throughout the competition to end up in the finals. The 2016 Rio Olympians took down the Austrian pair of Florian Schnetzer and Peter Eglseer in a straight set sweep. With the first place finish, it marks the first time that the pair has won a World Tour medal.

In the bronze medal match of the competition, Estonians Mart Tiisaar and Lusti Nolvak took the third place honor in a two set sweep 2-0, (21-17, 21-17) over Serbains Lazar Kolaric and Djordje Klasnic.

The win for the Americans was not as easy as it was for the Cuban men, as they took three sets to down the Czech Republic’s Martina Bonnerova and Sarka Nakladalova in three sets. Each of the sets played entered into extra points.

After the semifinals, Dicello had a bit of a setback with an ankle injury, but that did not stop her from pushing forward to win the gold in Langkawi. The pair have now won their first World Tour event together, and improved from their fifth place finish at Sydney last month.

To take the bronze in an all Austrian match was Cornelia Rimser and Lena Plesiutschnig over the Strauss sisters in a sweep 2-0, (21-18, 21-13).