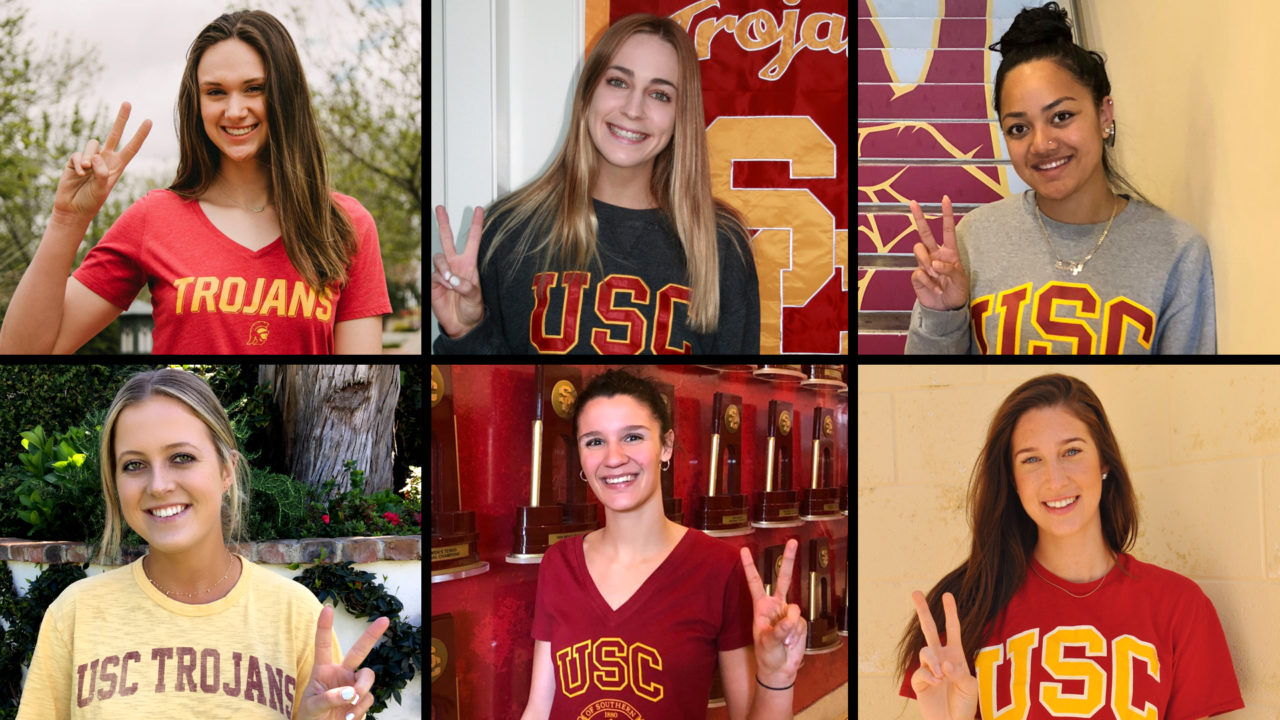 LOS ANGELES – The USC women’s volleyball program has added six student-athletes who will compete for the Women of Troy in the 2018 season, first-year Head Coach Brent Crouch announced on Wednesday, May 2.

“This is an excellent 2018 class,” said Crouch. “This group has athletes who can contribute immediately at potentially every position on the court, and students that belong at our elite academic institution. We graduated a solid group of seniors, but this class will be more than ready to step in and keep USC volleyball elite.”

Gross—a 6-3 middle blocker—was a standout performer for the Waves as an AVCA All-Pacific South selection in her sophomore season. She is a two-time choice for All-West Coast Conference first-team honors, a two-time WCC Player of the Week winner, and was also on the league’s honor roll as a freshman. Gross holds numerous Pepperdine single-match and single-season records for blocks and hitting percentage. Her 1.52 blocks per set ranked fourth nationally in 2017.

“Jasmine is both an outstanding volleyball player and person,” said Crouch. “She is an elite blocker and is extremely quick laterally. I expect her to compete immediately for playing time as a middle blocker. Jasmine is also one of the most driven learners I’ve come across, and we expect her to improve quickly in our teaching-oriented program.”

Hansen—a 6-4 middle blocker—prepped at Desert Vista High School and played for Aspire Volleyball Club. She has USAV High Performance experience at the A1 level and was a member of the High Performance all-tournament team. Hansen was the No. 70-ranked Senior Ace by PrepVolleyball.com and an all-region selection. She served as a team captain and was chosen as the team MVP as she led DVHS to three straight playoff appearances and the 2015 state crown.

“I am very proud to add Abby to our roster,” said Crouch. “She brings a warm, enthusiastic, personality; and is an excellent student. On the court, she attacks well off either one foot or two, behind and in front, in serve receive and in transition. She will become a force offensively during her career at USC and will push our middle blockers for playing time immediately.”

Humphreys is a 5-11 setter. She prepped at Corona Del Mar High School and played six seasons with the Laguna Beach Volleyball Club. Her high school squad went undefeated to win the league championship in each of her three varsity seasons. Humphreys is a three-time All-Pacific Coast League selection and was named Co-MVP as a senior. She was also a two-time All-Orange County choice and was the Daily PilotDream Team Player of the Year in 2017.

“Ashley is perhaps the most well-rounded volleyball player in this class,” said Crouch. “During her club career, she set and hit. As a setter, she is already running a fast offense, is comfortable going off one foot, and is an obvious leader on the court. I expect her to develop into an excellent setter during her career at USC.”

“Raquel is a highly-skilled setter with valuable experience playing internationally for her country,” said Crouch. “She brings a positive energy to our gym, and a competitiveness we love. She is already running a tempo nearly identical to what we will run in the fall and does so with precision from both perfect and medium situations, and in transition. With her addition, the setting position in 2018 is possibly the deepest it has been in several years, and that competition can only help our program improve.”

Schirmer is a 6-1 outside hitter with experience on the USAV Youth National Team. She prepped at Redondo Union HS and played for Mizuno Long Beach for seven years. Schirmer is a three-time all-league selection and was chosen as the MVP in 2017. Schirmer was named All-CIF as a senior and helped lead her squads to league championships three times. She was named to the JO all-tournament team three times and helped Mizuno win the national title in 2017.

“Brooklyn is a six-rotation outside hitter, the most important position on the court in terms of potential production,” said Crouch. “She is an elite passer and is an advanced attacker, capable of managing various attacking situations with a variety of shots. Brooklyn will push for time at the outside position early in her career and adds depth to our pin attack.”

Secrist is a 5-11 defensive specialist who helped lead Mater Dei HS to two CIF Southern Section Open Division Championships as an outside hitter (2015, 2017). She was named the 2017 CIF Southern Section Player of the Year and the Trinity League MVP. Secrist also helped take her team to a first-place finish at the Nike Tournament of Champions. She played six years with T-Street Volleyball Club where she earned several medal-stand finishes.

“With numerous family members that graduated from USC, Siena was born to be a member of the Women of Troy,” said Crouch. “She makes nice angles in serve receive, reads the game well, and has the tools to be a great passer. She comes from a club that teaches similar techniques to ours, and I’m excited to get in the gym with her.”

Last fall, the Women of Troy (25-10) received the 10th seed and appeared in the program’s 27th consecutive NCAA championship tournament (35th all-time) in 2017. The Trojans defeated Central Arkansas in the first round and upended No. 9-ranked San Diego in the second round to advance to the Gainesville Regional Championship hosted by No. 2-seed Florida. There, USC took down seventh-seeded Minnesota in a three-set sweep to advance to the team’s sixth NCAA regional title match in eight years. The Women of Troy finished in second place in the Pac-12 (14-6) after being selected to finish sixth in the coaches’ preseason poll.