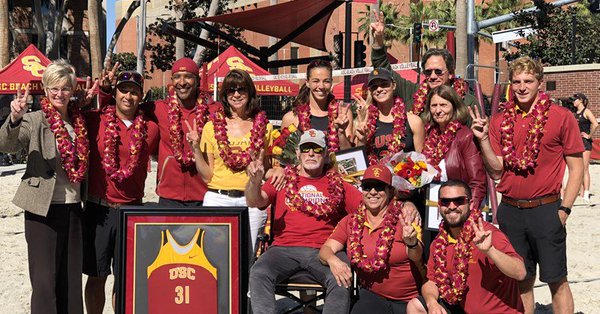 No. 5 USC wrapped up its home and regular season slates with a pair of Top 20 victories over No. 6 Long Beach State and No. 16 Grand Canyon on Tuesday. Meanwhile, No. 13 Cal edged No. 20 Saint Mary's.  Current Photo via USC Athletics

No. 5 USC wrapped up its home and regular season slates with a pair of Top 20 victories over No. 6 Long Beach State and No. 16 Grand Canyon.

Court 1 duo Abril Bustamante and Tina Graudina won both of their matches as did Terese Cannon and Sammy Slater, who played on Court 3 vs. LBSU and Court 2 against GCU. Both duos won in straight sets.

The Women of Troy won on Courts 1, 3 and 5 against the 49ers, picking up the final victory in three sets (21-16, 20-22, 15-13). Against the Lopes, USC picked up the wins on Courts 1, 2 and 4. Senior Jenna Belton teamed up with Maia Kaiser on Court 4 to grab a win in her final home match, while senior Jo Kremer earned victories in exhibition matches with Katrina Kernochan in both duels.

LBSU split the day’s matches, earning a 5-0 sweep of GCU in its opener. Court 2 pair Megan Kruidof and Rachel Nieto won against both USC and GCU in straight sets. The 49ers wrap up the regular season against No. 1 UCLA on Thursday.