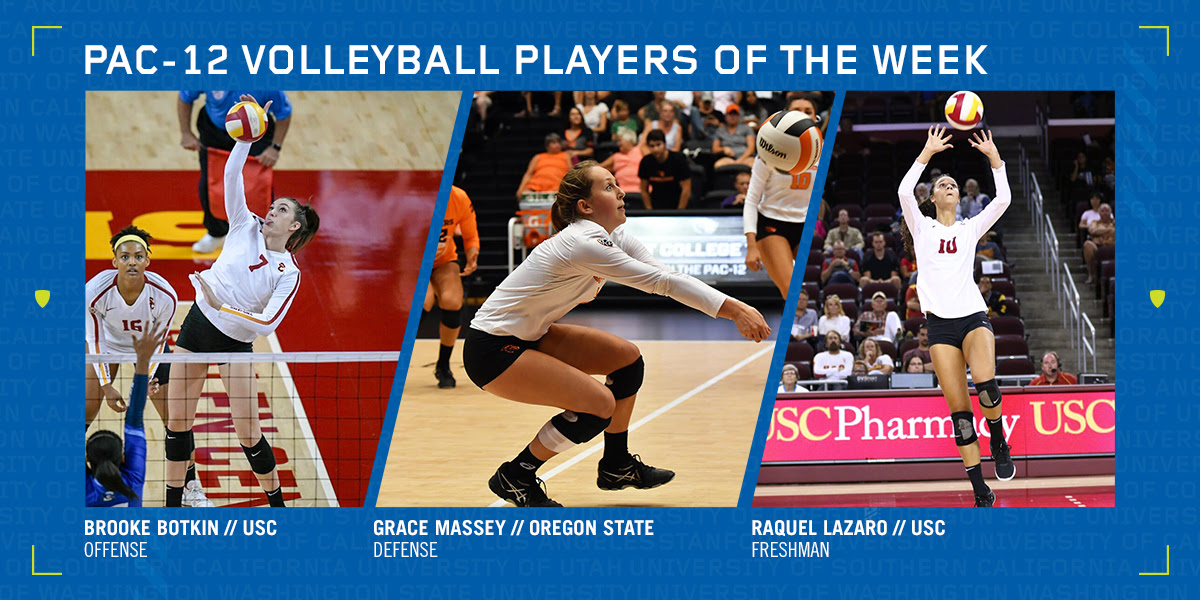 📰 #USCWVB NEWS
Congrats to @BotkinBrooke (Pac-12 Offensive Player of the Week) and @RaquelitaLC (Freshman of the Week) on their @Pac12 honors! First-time #Pac12VB awards for both Women of Troy! #FightOn ✌️🏐https://t.co/9C636MBTxM

Grace Massey, SO, Oregon State, DS (Beaverton, Ore.)
4.33 dps, 0.07 kps, 0.3 pps
• Named as co-MVP at the Iowa State Challenge, a rarity for a libero, after leading the Beavers to a 2-1 record, all of which were decided in five sets.
• Had over 20 digs in the first two matches of the season, registering 22 digs in a season-opening win vs. Virginia, followed by 28 in a loss to Mississippi. Also had a pair of aces against the Cavaliers.
• Solid passing and 15 digs helped the Beavers to upset #21 Iowa State in Ames.
• Third-career defensive player of the week honor for Massey, and the 31st all-time weekly nod for OSU.

Congrats to Grace Massey! She's been named as the Pac-12 Defensive Player of the Week! Article: https://t.co/n4Wx1JJs4I #GoBeavs pic.twitter.com/eAq90mBtyS

Raquel Lazaro, FR, USC (Cordoba, Spain)
11.57 aps, 2.67 dps, 0.67 bps
• In her first-collegiate matches (and first time playing in the U.S.), led the Trojans to three wins and the Trojan Invitational title.
• Defeated No. 5 Kentucky (3-1) in her first-ever college match, and helped USC beat Northern Iowa (3-0) and No. 13 Creighton (3-2).
• Her 55 assists against The Wildcats were the highest single-match total by a Trojan since 2012 (Hayley Crone).
• Recorded her first-career double-double with 53 assists and 22 digs in win over the Bluejays.
• Guided USC to a .248 hitting percentage across the three matches with 175 kills.
• 15th all-time freshman of the week honor for the Trojans.