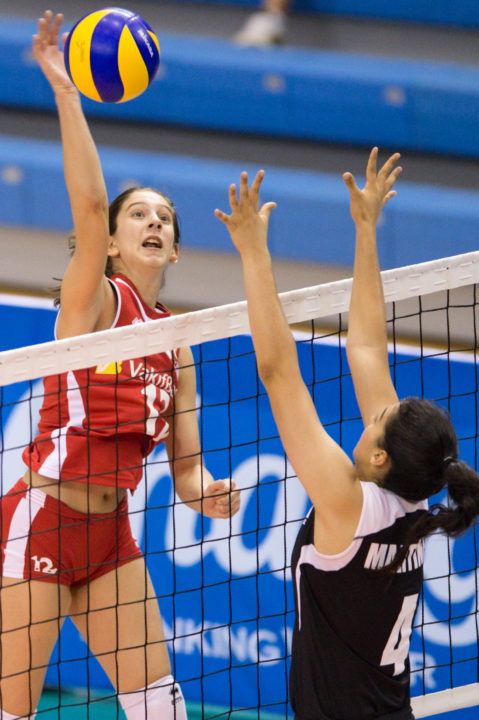 Fomer Turkish U18 and U20 National Teamer Merve Tanyel has returned to Fenerbahce after completing her collegiate career at USD in the United States. Archive Photo via Conny Kurth/FIVB

Turkish powerhouse Fenerbahce in Istanbul have completed their roster for the 2018-2019 season with the signing of 5’10” Merve Tanyel. For Tanyel, this is a homecoming to the club where she was a member of several title-winning youth teams before heading to the United States to play in the NCAA at the University of San Diego.

As a junior at Fehnerbahce, she played in 6 consecutive Turkish National Volleyball Championship tournaments with U-14, U-16, U-18, and the club’s reserves team. That includes playing on regional championship winning U14 and U16 teams, and scoring 40 points in a U18 game against Besiktas in December, 2012. In her final season with the U18 team, 2014, the club wend undefeated and won an age group national championship.

She’s also played on the country’s U18 and U20 national teams, including at the 2013 Women’s U18 World Championships, and recording 28 total caps. At those championships, she ranked 13th on the Turkish team with 13 points in the 9th-place match win over Italy. She declined a spot at the 2015 U-20 World Championships because it conflicted with the USD season.

She now becomes the 15th player on the senior women’s side of Fenerbahce’s, who are the 5-time Turkish champions, including as recently as 2016-2017. She joins an outside hitter corps that includes Samantha Bricio, Damla Cakiroglu, Fatma Yildrim, and Melissa Vargas.

San Diego advanced to the NCAA national championship tournament in each of Tanyel’s 4 seasons, including twice moving on to the 2nd round.