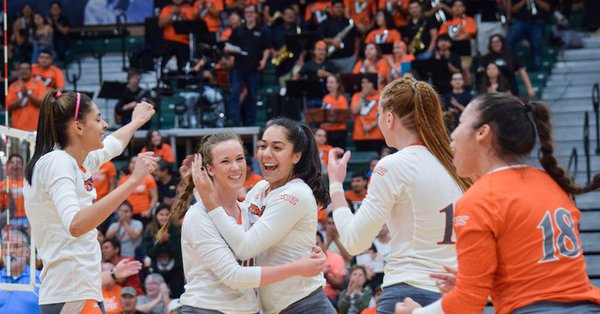 The University of Texas Rio Grande Valley (UTRGV) volleyball team clinched at least a share of the Western Athletic Conference (WAC) Championship, a top-two finish and a first round bye in the WAC Tournament by beating Chicago State University. Current Photo via UTRGV Athletics

EDINBURG, Texas – The University of Texas Rio Grande Valley (UTRGV) volleyball team clinched at least a share of the Western Athletic Conference (WAC) Championship, a top-two finish and a first round bye in the WAC Tournament by beating Chicago State University (CSU) 3-1 (25-19, 15-25, 25-22, 25-18) on Thursday at the UTRGV Fieldhouse.

UTRGV closes out the regular season against Kansas City on Saturday at 12 p.m. at the UTRGV Fieldhouse. If UTRGV wins, UTRGV will be the outright WAC Champion and number one seed in the WAC Tournament for the first time in program history.

UTRGV is in the midst of the second 21-win season in NCAA Division I program history after also winning 21 matches in 2016, the year UTRGV won the WAC Tournament Championship and reached its first NCAA Tournament.

The first set was tight early, with the first multi-point lead coming when UTRGV went up 8-6 on an error. Then, with the score tied at 9, a block by Knudsen and Ecker sparked an 8-3 run to put UTRGV up 17-12. CSU won the next two serves to pull within three before UTRGV went on a 7-2 run to reach set point. After three-straight points by CSU, a Knudsen kill ended the set.

After dropping the second set, UTRGV scored the first two points of the third set. UTRGV extended its lead to three for the first time at 10-7 on a block by Knudsen and Ecker. UTRGV went up by four at 15-11 on an error and five at 19-14 on another error. CSU came back to tie the set at 21. A pair of Silva kills helped UTRGV go up 23-22. Two serves later, on set point, another Silva kill ended the set.

CSU scored the first four points of the fourth set before a Silva kill sparked a 7-2 run to give UTRGV the lead. UTRGV pushed its lead to 11-7 on an error and 17-12 on a Knudsen kill. CSU got as close as 15-18 before a Knudsen kill helped UTRGV score three-straight points to push the set out of reach.

EDINBURG, Texas – The Chicago State volleyball team kicked off its final road swing of the season here tonight as it dropped a 3-1 decision to UT Rio Grande Valley in a Western Athletic Conference battle at UTRGV Fieldhouse.

The first set went to the host Vaqueros by a 25-19 margin before the Green and White took a 25-15 victory in the second set to even the match at 1-1. UTRGV posted the match win after winning by a close 25-23 duke in the third set and clamed a 25-18 win in the fourth set.

Junior Megan Klavitter (Fenton, Mich./Linden) produced 20 digs to bring her season total to 663 to place herself in a tie for third on the WAC’s single-season leaderboard. Senior Lauryn Dela Cruz (Provo, Utah/Timpview) posted her team-leading 14th double-double of the year with 18 digs and 10 kills in addition to tying for top team honors with sophomore Summer Farris (Farmington Hills, Mich./North Farmington) with five total blocks.

CSU closes the regular season Saturday afternoon in New Mexico versus New Mexico State at the Pan American Center in Las Cruces with a start time of 3 p.m.